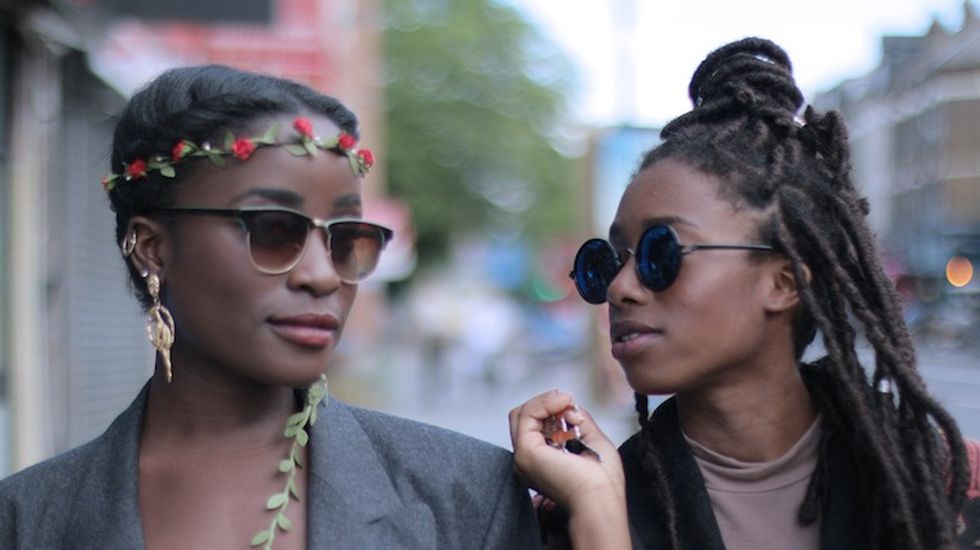 UK filmmaker Cecile Emeke's portrayal of two young Black women in her film/web series 'Ackee & Saltfish' is unlike anything else on screen.

*All stills via Ackee & Saltfish

In November we spoke with UK-based filmmaker, poet and multimedia artist Cecile Emeke about her work breaking "single story dogma." Emeke's latest project, 'Ackee & Saltfish,' is a recently unveiled short film and a forthcoming web series that look at gentrification in London through the conversations of two best friends. "On a sunny Sunday afternoon Olivia and Rachel carry out their usual routine...absolute relaxation, however when the time comes to whip up some brunch it turns out Rachel forgot to soak the saltfish overnight," opens the film's storyline. "With an empty fridge, a lazy sunday afternoon state of mind and hearts set on ackee & saltfish, the two friends decide to drive down the road to Dalston to get some Caribbean takeaway..." The 17-minute short film is now available to watch here. The web series is set to premiere on Sunday, February 22. Below, Okayafrica contributor Adwoa Afful (The Style Idle) offers her take on Cecile Emeke's 'Ackee & Saltfish.'

Cecile Emeke has a talent for dialogue. In the opening scenes of Ackee & Saltfish, when best friends Olivia (Michelle Tiwo) and Rachel (Vanessa Babirye) banter over breakfast or on the hunt for Jamaican take-out, they're easily able to explore topics both intimate and broad without losing a beat. These seamless conversations allow Tiwo and Babirye’s spot-on comedic instincts to shine, forming the backbone of Emeke’s smart but highly relatable brand of comedy.

Emeke’s portrayal of two young Black women is unlike anything else on TV or the web right now. Yet something about it feels familiar. There’s no contrived romantic subplot, no barriers the characters need to overcome, no existential crises they need to work through. Rather, Emeke has the confidence and skill to let her characters do what two young Black women are so rarely allowed to do on screen – just hang out.

Prior to Ackee & Saltfish, Emeke worked primarily with short documentary style films, including the equally stellar Strolling series. This latest project is fictionalized, but shot more like a series of mini docs, with each episode playing like a snapshot, wholly contained, and tied up nicely at the end. While there is no overarching narrative that ties the pieces together (nor with the film), each installment broadens our understanding of the emotional core into Rachel and Olivia's characters and friendship. Olivia, the bleeding heart of the pair, is upfront with her progressive politics, and Rachel is the embodiment of the carefree black girl as the two broach issues related to race, class, gender and ethnicity with subtlety. The effects of gentrification, for example, are manifested in Olivia’s frustration at not being able to find a Jamaican food joint in her neighborhood. Through deft storytelling, Emeke makes bigger picture problems specific and personal without losing their social and cultural implications.

Emeke’s approach to filmmaking is lean. There‘s no excessive dialogue, no unnecessary scenes. It feels natural to get comfortable in the company of Olivia and Rachel. By the time the film closes you don’t really care if the friends finally manage to get their hands on some ackee and saltfish-- you’re just glad you got to tag along.

Adwoa Afful is a Ghanaian-Canadian fashion and culture blogger based in Toronto, who writes about fashion from a feminist perspective. You can follow her at her blog The Style Idle, as well as on Tumblr and Facebook.