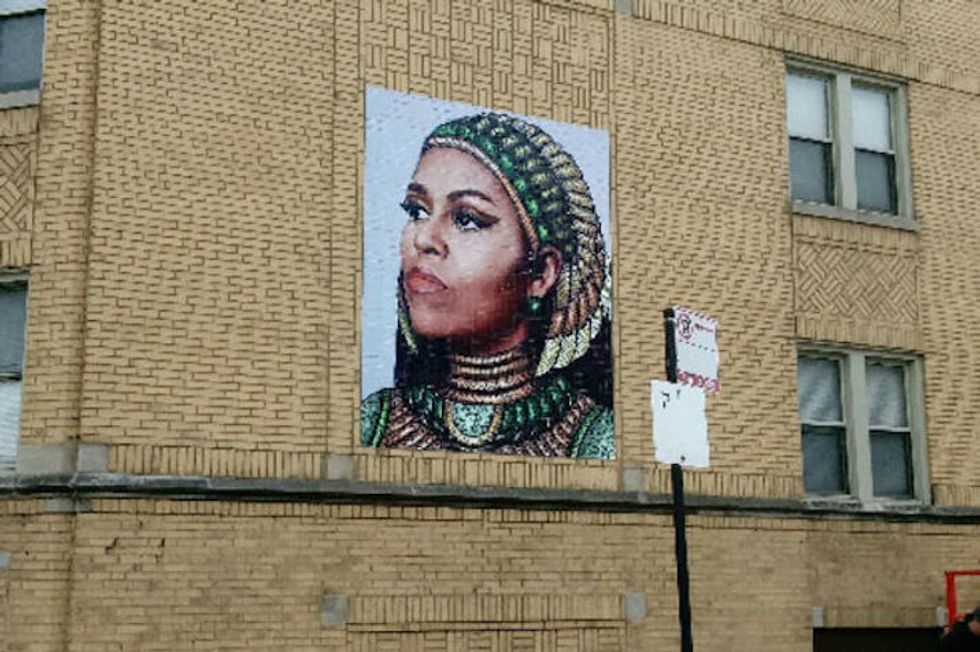 Chris Devins came under this weekend for using Gelila Lila Mesfin's image of Michelle Obama for his latest mural, without crediting her.

Last Friday, Chicago-based artist Chris Devins—known for his large-scale murals of famous figures—unveiled his latest "work," an image of Michelle Obama depicted as an Egyptian queen, wearing an ornate gold and green headpiece. The public mural is located just blocks away from the former First Lady’s childhood home.

Devins faced backlash over the weekend after being accused of stealing the image from Gelila Lila Mesfin, an artist, based in Rhode Island, who posted the image on her Instagram in October, 2016:

Mesfin's followers immediately recognized the uncanny resemblance, and many took to Twitter to call out Devins for his plagiarism. Mesfin posted a response via Instagram. "This is so disheartening and so disrespectful on so many levels," she wrote.

How can you just steal someone's artwork... someone's hard work and claim it like it's yours... how can you go on record and say you designed this... this is so disheartening and so disrespectful on so many levels... like this man seriously created a gofundme page, raised money and did this... it's one thing to share or even profit from someone's work but to claim it as yours is just wrong! Thank you to those who DM and messaged me to let me know what was going on @dnainfochi you guys should take this article down because this man stole this. I wouldn't mind if he had given me credit or said he took the design from another artist but saying you designed it is just wrong! The man is a teacher for God's sake and said he was doing this to create positivity for his students and community... but he didn't think that stealing a young girl's artwork and making a profit out of it does more damage than good.

Last November, Devin's team started a GoFundMe to help raide $9,900 for the mural. At the time, the page featured a standard, black and white photo of Michelle Obama. Devins ended up raising $11,785 for the project. "I wanted to present her as what I think she is, so she's clothed as an Egyptian queen. I thought that was appropriate," he told DNAinfo.

Devins apologized for the incident on Saturday, claiming that he was "inspired" by Mesfin's work, which he had previously seen on Pinterest. “Our non profit Urban Planning Projects often include painting inspired by found images," he said in an email to DNAinfo. "We were blown away by a wonderful image we stumbled on and only found out after the fact who the source of our inspiration was. We in no way meant to [infringe] on anyone’s creativity.”

He told DNAinfo that he has since reached out to Mesfin and offered her a licensing fee for the image.

Mesfin took to Instagram once again in response, stating that she hopes to "resolve the issue" with Devins, and asked that her supporters "keep this positive towards him."

Chris Devins has responded yet again, claiming that the Ethiopian-born Gelila Lila Mesfin's whose work he stole, “has no legal grounds to stand on for copyright infringement,” reports DNAinfo.

“Her work is itself considered a derivative work of the original photographer,” he said. “She herself appropriated Ms. Schoor's image and ‘digitally painted’ over it. You can’t appropriate a bike then sue someone for riding it.”

Mefani told the Washington Post that she was "disheartened" by Devins actions. “There’s a common code among all artists that you can get inspired by someone’s work but you have to pay homage and you have to give credit for it.”