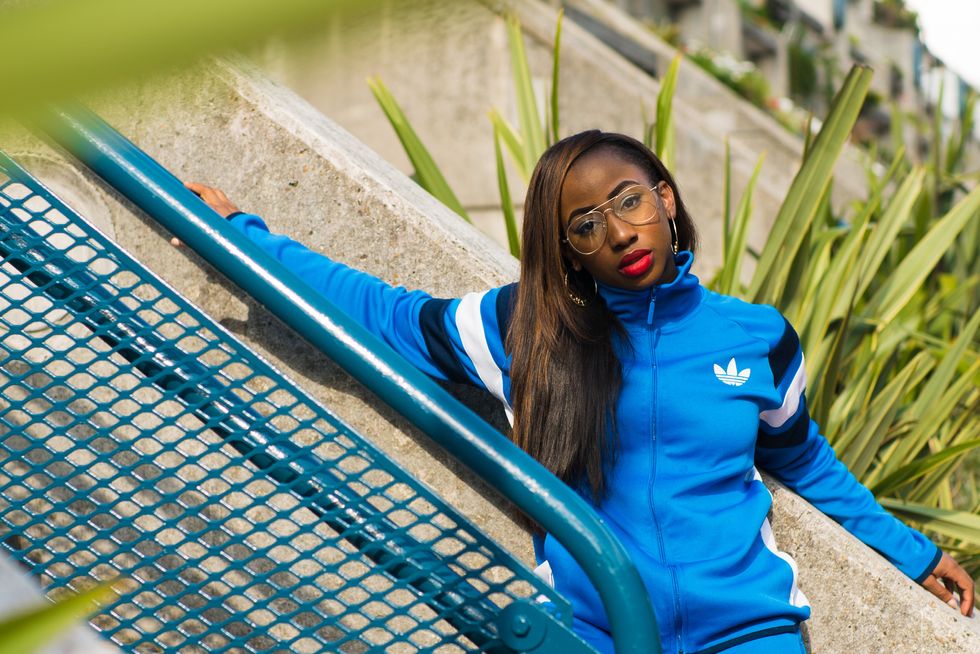 The Nigerian-American director and all around creative chats with us about her short doc, "Black in Tokyo."

In the short documentary, Black In Tokyo, 23-year-old director Amarachi Nwosu explores the varying expatriate experiences of navigating the global scope of blackness. In Japan, one of the world's most homogenous nations, blackness functions as an inveterate staple of counterculture. So what does it mean to be black in spaces outside of the U.S. where blackness is both invisible and hypervisible; where blackness isn't fully understood?

Black In Tokyo chronicles the lives of subjects from across the Black Diaspora—an American rapper, an Eritrean-Djiboutian model, a military couple, and a Ghanaian businessman and owner of one of the first black hair salons to open in Tokyo. As they all reconcile the limits and liberations of being black in Japan, their disparate experiences are suffused with one common theme; otherness.

That reality is why Nwosu launched Melanin Unscripted, a visual platform devoted to examining the crevices of identity and culture.

Having settled in New York City, Washington D.C., Lagos, London, and Tokyo throughout the years, the film has become a paradigm for Nwosu's own life. Now she's in Nigeria again, filming another documentary project, while anticipating a move back to Japan soon, where she'll be working and going to language school. But Nwosu's nomadic approach is grounded in purpose, as she seeks to hone her skills and deepen her connection to the countries and cities that have molded her art and self.

Read our conversation with Nwosu below.

Ivie Okechukwu Ani for OkayAfrica: You wear many hats: director, photographer, writer. Can you talk about your origins in these fields, and what prompted you to pursue them? Did you study these fields in school, or are you self taught?

Amarachi Nwosu: I am self-taught in all my creative endeavors. I knew I wanted to start my platform Melanin Unscripted and I really didn't want to rely on other people to bring my vision alive. Instead I used my interest in film and photography to motivate me to learn and teach myself. I have always loved visual art and took photos at a young age, but it wasn't until I was 20 that I really woke up and took it seriously. I have decided that this year out of school I will be a nomad and see where it takes me. I'll never be this young again, so I have to take as many risks as I can now.

I know you've traveled to many different parts of the world. What in particular drew you to Japan as the focus of this film?

For one, I didn't see anything compelling and inspiring on black travellers in Asia when doing research, so I wanted to fill that gap and create something that could connect to people of all walks of life. I have always had an interest in Japanese culture and when I won 6 scholarships to study abroad, it made sense to take the risk and see what could happen. The film was an after thought, but something I am beyond happy I created.

In your travels, how do you navigate your blackness, being Nigerian, and being American simultaneously? How do you think your identity functions differently across each space you enter?

I maneuver my identity by embracing all the parts of me that exist. For example, In Japan there was a stigma about African expats compared to their African American counterparts. While some people would try and make jokes about the African people working and selling things on the streets of Tokyo, I would always remind people that I too was Nigerian and proud of my heritage. I also educated them on the fact that a lot of representations on African identities are one-dimensional and objective at its best. I don't [omit] pieces of my identity to please others; I wear it proudly so that the young people coming up behind me can do the same. I don't want people to love me for something I'm not, but rather for all parts of me that make me who I am.

From my time knowing you, I see you as sort of a conduit of the African side of the Black Diaspora as it pertains to young people working in media and entertainment. Basically, you know everyone, and everyone knows you. How did you jump-start building these connections? What's your networking process like?

Honestly a lot of things have happened organically. In many cases people learn about me and my work through word of mouth, but other times I have personally contacted people and built relationships by taking the risk and touching base with them. When working with Mr Eazi for example, I personally reached out to his team about doing a project with the platform I was working for and we connected really well on set and have been friends since then. But if I never took the risk by asking to work with him, it wouldn't have opened the doors that it has for me. Once you connect with one good person, it's a chain reaction because they introduce you to other good people and so on.

Video still from 'Black in Tokyo.'Courtesy of Amarachi Nwosu.

Video still from 'Black in Tokyo.'Courtesy of Amarachi Nwosu.

When it comes to identity, people seem to stop short at representation, but there are so many elements to identity that transcend that. Can you speak on the premise of Melanin Unscripted and what you plan to do differently when exploring identity?

Melanin Unscripted is aimed to dismantle stereotypes and blur the racial lines by exposing complex identities and cultures instead of the one-dimensional narratives often reproduced in mainstream media. The idea is to inspire people to pursue their passions regardless of what background they come from by sharing unique stories of individuals, who are pushing the culture and paving the way for the next generation of young people.

Beyond creating representation I want to also curate experiences that can impact people directly and build community programs that help artists coming from undeveloped countries by giving them information and tools to be the best version of themselves. Ultimately I want to create a community and empower people to push their own boundaries.

Do you feel it's imperative that people of the Diaspora develop our own platforms instead of latching onto already solidified ones?

It's so important! If we do not create our own representations, then we cannot get mad when people represent us incorrectly. That is why we have to take control of our own narrative and give back to our own communities. A lot of magazines and publications monetize on black culture daily, but they do not invest in black communities. That is why we have to be apart of building our own platforms for us, by us, because in the long run it can truly shape the diaspora for the better and open doors that were never opened before. Ownership is everything and that why I chose not to sell this documentary to a big publication; it was an opportunity to develop my own and see where it goes.

Community means everything to me and has truly set the foundation for all youth culture movements around the world. I believe that in order to truly make an impactful difference in the world it is a collective effort that entails people who are passionate in creating change. As a Nigerian American I have grown up seeing a divide between African people and African Americans and I have always wanted to find ways to fill the gap because there is so much history and beauty in both cultures that need to be exposed. So I see myself as a bridge between these cultures and have consciously used the projects and platforms I have access to as a way to create community through my work. As a woman working in the media and entertainment industry, community is also very important because when women work together, it is a unique energy that breeds amazing work. So I consciously work with a lot of women and women of color because the truth is that if there is no diversity behind the scenes, it will be hard to see it in front.

Where do you call home? Which of these spaces that you've been navigating these past few years do you think allows you to the be your most authentic self- as a creative, as an individual?

I have honestly made a home out of myself, so I believe that anywhere I go, I can be at home as long as I radiate what I want to receive. D.C. is where I was raised, but NYC is where I developed my hustle and London is where I got cultured and Tokyo is where I was reborn. All of these places are home in one way or another and a huge part of who I am. I want more people to develop this outlook through Melanin Unscripted and projects like Black In Tokyo because I truly believe that on the other side of fear, is your purpose and true destiny.