Could Justice Finally Be on the Horizon for Marikana Massacre Families? 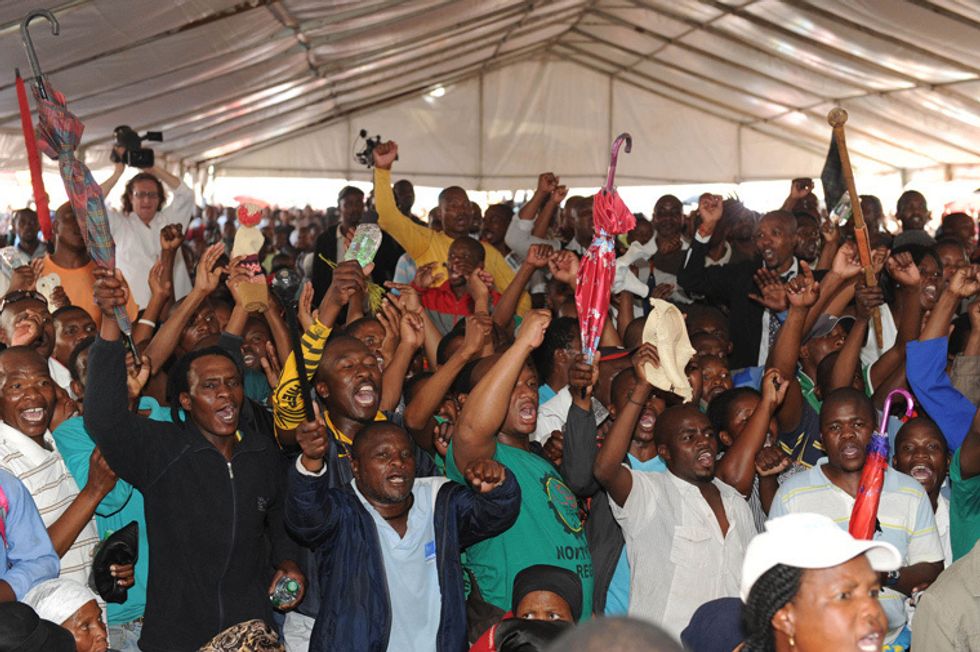 New evidence suggests that the police intended to kill all along.

Today marks the sixth anniversary of the Marikana Massacre, when 34 mine-workers were gunned down by police after several days of wage disputes at Lonmin Mine in Rustenburg, North West province. New information was recently uncovered that undermines the police's longstanding claim that they acted in self-defence. If anything, it is a glimmer of hope for the families of the victims that remain left behind in the aftermath of that tragedy.

It was the worst mass civilian killing since the 1960 Sharpeville Massacre, where South African protesters were killed for opposing the Apartheid regime. The Marikana Massacre, in contrast, was the tragic consequence of week-long wage disputes and clashes between miners and the South African police.

While media footage appears to show the miners as the victims, police have always argued that they were acting in self defence. Consequently no officers involved have been charged. Instead, the surviving mineworkers face murder charges under the doctrine of common purpose. But unnerving facts have come to light that seem to make the police argument even less likely. This includes the ordering of 4000 rounds of live ammunition and several vans from the mortuary the day before the massacre.

I cannot even begin to unpack my anger and frustration at this terrible irony.

A recent report from the Institute for Security Studies (ISS) shows a reconstruction of the events of that fateful day. It sheds light on how, in what they have since termed "Scene 2" (the site where police fired 295 shots and killed 17 mineworkers), it is evident that not only did the mineworkers not shoot at the police but that the police acted in both a reckless and irresponsible manner. Camera footage taken by police officers themselves and that was subsequently leaked, showed police officers stalking surviving mineworkers after the initial hail of bullets through the grassy plains and proceeding to shoot them dead. One young man was shot twelve times. Twelve times. In the camera footage, one can clearly hear a police boasting unabashedly at having shot the young man down like an animal.

"I have wept because I suddenly realised that even black people, my own people, could kill us just as maliciously as the system of whiteness does and has always done. Let that sink in."

I have watched countless documentaries on the Marikana Massacre and every time I have simply wept. I have wept because in one instance there are men saying "come and see how we live, how we have nothing" and in the next instance, they are taking their last breaths in front of the entire world. I have wept because a grown man, the president of AMCU, the trade union representing the mineworkers, wept because he felt he had failed his men. I have wept because the image of Noki, the spirited man in the green blanket, has refused to dislodge itself from my mind. And lastly, I have wept because I suddenly realised that even black people, my own people, could kill us just as maliciously as the system of whiteness does and has always done. Let that sink in.

The uncovering of this new information is extremely important if justice is ever going to be served for the deceased mineworkers, the surviving mineworkers who now face murder charges and the families left behind and who are still living in abject poverty. The police must be held accountable. Riah Phiyega, then National Police Commissioner, needs to account for the actions of the police under her leadership. The role of the now President Cyril Ramaphosa needs to be interrogated much further than it has been. I frankly don't buy the "I did not sit on the executive board of Lonmin and thus was unaware." Yes, he did not sit on the executive board but this is man has made it his business to understand and involve himself in the inner workings of the companies he's invested in and was the first Secretary General of the National Union of Mineworkers (NUM) and thus worked very closely with the various mining communities. You mean to tell me he had no clue whatsoever as to the emails that were sent back and forth between Lonmin executives and the police days before the massacre? He had not so much as a whiff of what was to come, even if it was only minute? I strongly believe that he must have known to some degree what lay ahead for those mineworkers on that day and he needs to own up to it. I really don't care for the promise which he made at Winnie Madikizela-Mandela's funeral where he said he would go and visit the widows of Marikana along with Julius Malema. He must account for what happened first.

The country's heart continues to bleed six years later. I cannot even begin to imagine the grief of the actual families whose lives have forever changed or the anxiety of the mineworkers who are now being charged with murder—their punishment for having survived the horror.

My highest and perhaps most naive hope, is that if nothing else, that the lives lost, both physically and otherwise, will be atoned for and that the righteous laws of this country will eventually prevail.