Why I Couldn’t March in Today’s Anti-Zuma Protest 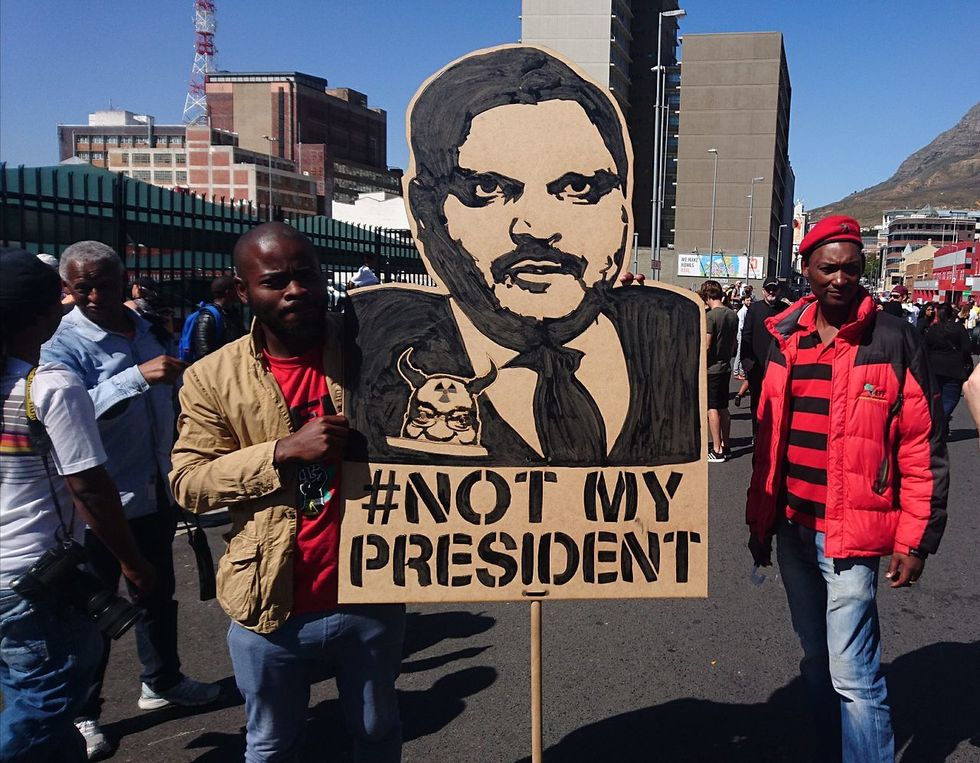 A veteran of the #FeesMustFall explains why, despite wanting Zuma to go, she could not participate in today's protests.

While many feel that today’s marches against South African president Jacob Zuma signify our country coming together and putting aside issues of race, class and political affiliation, this couldn't be further from the truth–not by a long shot. While South Africans of all backgrounds chose to put so-called differences aside to protest Zuma, many black South Africans chose not to. I am one of them.

Over 20,000 South Africans across the country marched today calling for the resignation of President Jacob Zuma following his recent and heavily criticised #CabinetReshuffle, in which fifteen Ministers of Parliament were axed including Finance Minister, Pravin Gordhan. Until yesterday it was not clear whether protesters would actually be allowed to march to the Union Buildings in Tshwane. Despite civil society organisation Save SA having been granted permission by the Magistrates Court, many government officials insisted that the #AntiZumaMarches were still illegal. Nevertheless, the marches went ahead.

The atmosphere of today's marches was vastly different to what I experienced as a student during #FeesMustFall. In the march to the Union Buildings in 2015, I and other students, were shot at with rubber bullets by police, often at close-range and mercilessly tear-gassed. Days after the protests, I could still hear the phantom sound of rubber bullets whizzing past me. I have genuinely never been as frightened as I was then.

Today’s protests were nothing like that. There was no police brutality or fear for one's life and this was undoubtedly because of the presence of white South Africans. There is a certain respect and consideration that is still afforded white South Africans in this country, suggesting entrenched issues of race and class, 23 years since the end of apartheid. Many young black South Africans, myself included, refused to march as a matter of principle. Where was the outrage when poor and middle-class black students were being shot at and manhandled by police during #FeesMustFall? Where were all the elaborate billboards and colossal signs on the back of large logistics trucks then? Where was the abundant funding and backing then?

The difference between #FeesMustFall and today's #AntiZuma marches boils down to race and class and the primary reason for national outrage is the fact that white privilege is in danger and like a threatened snake, it's striking back.

WE ARE PRIVILEGED AND NO ONE COULD BE PROUDER AND IF YOU CANNOT HEAR US WE'll SHOUT A LITTLE LOUDER #AntiZumaMarch https://t.co/Y9e7VgO4vk
— #TwinPipes (@#TwinPipes) 1491545406.0

For all the images of black and white people standing hand-in-hand depicting a utopic togetherness, these protests do not change the respective realities of either. This is not to say, however, that I support Zuma or any of his costly shenanigans during his corrupt tenure. No. Zuma has overstayed his welcome and must step down. It's also not about smugly giving the middle finger to a white monopoly at the expense of the entire country. In fact, it's not even that these protests in themselves are bad.

Days after the protests, I could still hear the phantom sound of rubber bullets whizzing past me. I have genuinely never been as frightened as I was then.
The fact that protestors marched to Saxonworld and protested outside the Gupta family's property is pivotal because their influence over Zuma and subsequent dealings with him, are an undeniable part of the problem. We must by all means exercise our democratic right as citizens to protest and stand against corruption and injustice. However, we cannot also be selective about the injustices we choose to stand against – a double standard that has angered many black South Africans and led to them refraining from protesting.

Although the general consensus right now is that Zuma must indeed go, I can't help but to be led to believe that white South Africans in particular, will misconstrue the support shown in the marches today by black South Africans as being synonymous with wanting the ANC to go as well. While this may seem intuitive, the two are very different. This is not to say that the ANC is free from harsh critique and that its days aren't numbered; it is not and as such must be called to account for itself as expressed recently by prominent figures such as Desmond Tutu.

In fact, many ANC members marched to Luthuli House, the headquarters of the organisation and expressed this very sentiment along with their desire to see Zuma resign. However, because I am almost certain that a large percentage of the white South Africans protesting today are members of or support the DA and given the unexpected win of the City of Johannesburg last year by the opposition party, spirits are sure to be high in terms of possibly ushering in a new ruling party in the 2019 elections. Some white South Africans were seen wielding placards with the words of the late Nelson Mandela which read: "If the ANC does to you what the Apartheid government did to you, then you must do to the ANC what you did to the Apartheid government."

But this is where many white South Africans and the DA blunder terribly. Black South Africans do not view the current state of the nation under Zuma's leadership or most importantly the ANC, as being in any shape or form comparable to the struggle during Apartheid. And it is for this reason alone that I believe that even if Zuma resigns tomorrow, and even if the opposition parties are able to accrue a few more votes in their favour in the 2019 elections, the ANC will still win the majority vote by a landslide.

Then you can understand why we will never separate Zille and problematic yt liberalism from the DA https://t.co/kl3KBm9abC
— Rxfaro (@Rxfaro) 1491288709.0

This revelation alone should be testament to the fundamental divide that still exists between South Africans when it comes to the differing opinions prevalent regarding the general leadership of this country, whether Zuma is at the helm or not, and we need to interrogate this heavily. Will today's marches usher in the major political changes that many white South Africans are so eager to see beyond the resignation of Zuma? We'll have to wait and see.

What I do know for sure is that the only time I will be joining in the marches is when a large percentage of white South Africans, and not just a few 'woke' individuals, start becoming just as vocal about the injustices being faced by black South Africans as they've been with Zuma and the ANC in the past few days. When White South Africans stop being dismissive of black issues and calling for unity only when they feel threatened, that is when I'll join the protests. But seeing that it's largely black people having this conversation right now, as always, I doubt that’s likely to happen any time soon.