How DACA Is Affecting This Thriving, Young Nigerian Artist 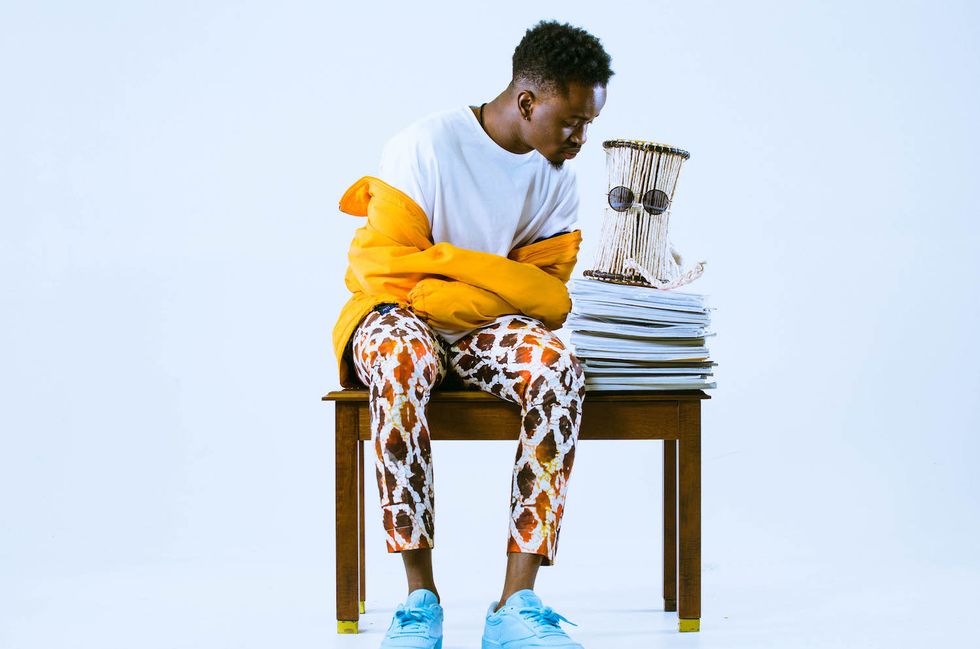 Mannywellz. Photo courtesy of the artist.

Mannywellz has millions of plays and has toured with Jidenna, but his career may be crushed by Trump's move to end DACA.

Mannywellzis a rising, Nigerian-born artist who crafts songs from a potent blend of hip-hop, R&B and West African influences.

And he's been doing great. Tracks like "Wrong Place," an electro-tinged R&B highlight from the recent Soulfro EP, have earned him millions of plays on streaming platforms like Spotify and Soundcloud. He also toured across the United States with Jidenna last year, which only added to his buzz. But it's also where the problems started.

As a recipient of the Deferred Action for Childhood Arrivals (DACA) policy, Mannywellz' is one of the 800,000 young immigrants who receive a renewable two-year period of deferred action from deportation and eligibility for work permits. That will come to an end soon under the Trump administration's mission to repeal DACA.

That uncertainty has heavily affected Mannywellz' career. It's influenced some of his most popular songs, like the sorrowful "American Dream," but also derailed long term plans and forced him forgo massive tours. He couldn't join Jidenna in international concert dates across Europe and Africa, for example, for fear of what would happen when he tried to return to the US.

In "American Dream," one of his most streamed songs, Mannywellz sings about coming to the U.S. at 9 years-old with his family, "... don't you worry we gon' have a better life, we will be one again, happy family... I was brought to come and live the American dream." However positive the lyrics may seem, the song is coated with melancholic singing and muted guitar work.

We sat down with Mannywellz to talk about how Trump ending DACA is affecting a young African artist like himself.

First of, tell us about your music and the new Soulfro EP.

It's music from the soul with Afro elements—a style of music that blends several genres, not just afrobeats. It's soul meets hip-hop, R&B, folk, rock—whatever. I always believe in genre-bending. My influences come from my favorites like Asa, a Nigerian artist based in France. I love what Bob Marley stands for. Kanye West, Ryan Leslie, Timbaland. Also Fela and Sunny Ade from Nigeria. They really influenced that sound, then people in America like Drake and Kendrick influenced other cadences I use. Nigeria is the heaviest influence on the music, though. I use a lot of native sounds and instruments, like the talking drum. My vocals are very West African as well, in the way that I enunciate things.

When did you move from Nigeria to the U.S.?

I came in 2003, when I was 9-years-old with my youngest sister and my mother. My dad was already in the States. I moved to Prince George's County in Maryland—Bowie to be exact. I've lived there my whole life, from '03 to 2018, that's 15 years.

How was growing up in Maryland as a Nigerian kid?

It was interesting. There were a lot of African booty scratcher jokes. But I had tough skin. One thing that I'm not sure is positive or negative is that I tried to fit in. I didn't really get too much flack for being African—I became a class clown and people laughed with me. They were like "Oh that guy's from Africa but he's, like, cool."

How did you get into music?

My dad's a musician, so I was born into music. My dad and I have performed for presidents and vice-presidents of Nigeria. I started performing with him when I was 9 years-old. Two weeks into when I came to the U.S. he just gave me a mic. Nigerians would have parties and call up musicians to entertain, so that would be my dad, he did that all over the States. He released three albums in the US and, before he came here, he wrote a record for the church that sold over a million records in Nigeria.

Tell us about being admitted as a DACA recipient. What was life like before and after?

It was tough before DACA. I couldn't get a regular job, so I had to buy Jordans or phones and flip them just to pay my own phone bill. Things were hard. My dad had moved back to Nigeria, so it was just my mom and my younger siblings. That was five years ago or so in 2012. I remember my friends being able to drive when they were 16 and I had to wait until I was 19 or 20 years-old to get a freaking permit. Receiving the DACA was a relief because I was able to get a regular job—from Ledo's to Sun Trust to PNC, you know.

Are your siblings DACA recipients?

My sister is but my two youngest siblings were born here so they're citizens.

How did you feel hearing the news about Trump wanting to repeal DACA.

It felt weird man. I didn't know how to feel.

And that announcement put a stop to the Jidenna tour you were meant to be on?

Yeah, so with Jidenna, a friend of mine sent them my music. They loved it and became fans of the art that I was creating, so when he announced his tour, my management got in contact and said, let's make this happen. Touring with another dope Nigerian act, who's doing his thing, I learned how tours work, the ins-and-outs, what to do and what not to do. It was BIG. We went everywhere around America but I couldn't even go to Canada because of my DACA situation. My legal situation through this DACA stuff has been very taxing on my career. We didn't want to risk it. Jidenna asked me to go to Europe and Africa with him—he's in South Africa right now—But I can't do anything outside of the United States at all because of my situation and fear of the risk that I may not get back in.

How do you navigate your situation now?

My main goal is to inspire kids that are just like me. Coming out and letting everyone know that they're not alone in this DACA fight and that we can stand together, pray together and make something happen. I think that's my main goal with my art, with what I stand for and what I release on social media.

Have you met many other DACA aritsts?

A lot of people have been messaging me saying they're DACA kids. My guitar player is a DACA kid. I'm not going to mention names but other people back home that are aspiring artists, Nigerian to be exact, are DACA kids.

Is there anything else you want to add?

Just pray for us. Pray for the DACA kids!