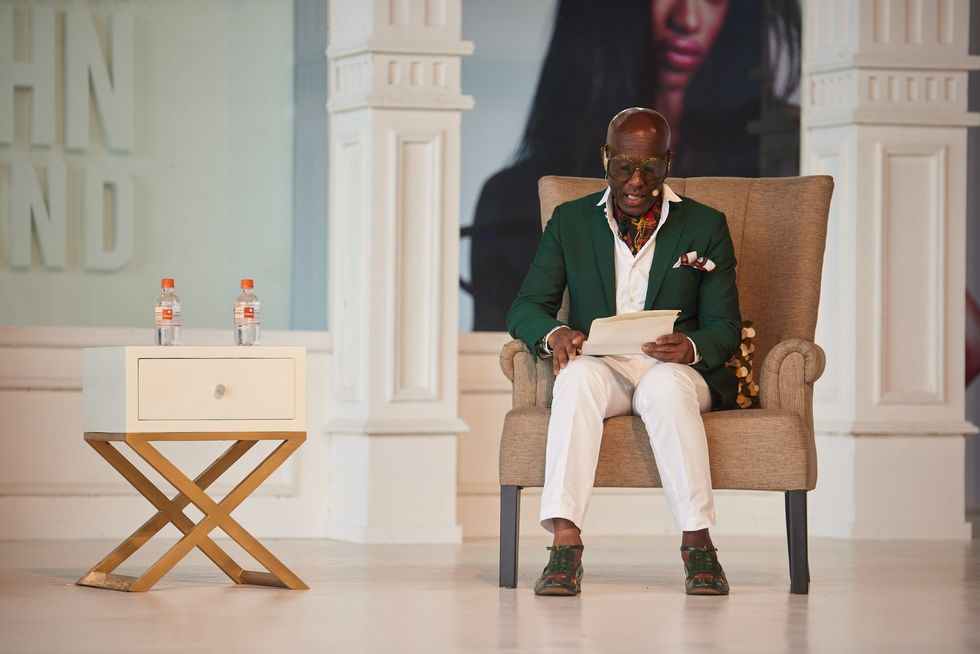 The Harlem fashion icon drops serious gems on building a luxury brand, connecting with his blackness during his travels around the continent and more.

GTBank Fashion Weekend not only served fresh street style and emerging fashion on the runway, but also provided the opportunity for fashion industry hopefuls and veterans to take the time to learn from the best in the business. One of whom is a living legend—Dapper Dan. The man who redefined high fashion and has been immortalized through numerous rap songs was the perfect speaker to give a masterclass on "Making A Fashion Statement."

Wearing a green jacket, green shoes and his signature Green Gucci aviators, capped off with a cravat on a white shirt and beige pants, we were clearly in the right room. The fashion icon took some time to share tales from his illustrious past, styling the likes of Missy Elliott, Jay-Z, Aaliyah, P. Diddy, Floyd Mayweather and many more.

Here are the seven lessons we learned from his masterclass.

He explains the strong link between music and fashion in his earlier days.

It was only the Gangsters who could afford his clothes at the time and their personal style influenced rappers of the age who became loyal patrons. Dapper Dan drew parallels between his context in New York, and how his brand was exported globally through hip-hop acts, and the Lagosian convergence of fashion and music in afrobeats and afro-pop with acts like Wizkid who recently collaborated with Nike on a limited run of Jerseys.

A Dapper Dan movie is coming to a cinema near you.

Yes, indeed. The man who introduced high-fashion to hip-hop also has a biopic in the works that will be based on his memoir Made In Harlem. He made the announcement to an ecstatic auditorium of would be movie-goers as the film is set for a 2019 release.

The "MTV blur" was made because of Dapper Dan + his approach to networking and marketing.

According to the fashion designer, there are two approaches to networking: "You either start with your immediate circle or collaborate with the people you want to sell to." Dapper Dan says a key aspect of his marketing was that he generated excitement about himself before his brand. "When all the rappers were coming to the store, they wore my clothes on MTV," he continues. This led to Ted Demme, director and 'Yo! MTV Raps' co-founder to know of him (and contract him to style rappers on occasion) due to the profligacy of his designs in the music videos of the late 80s to early 90s. He went on to explain that the "MTV blur" was created because of him. Partly because of the curator of MOMA called him "the most important person in this age when it comes to logos." In a closing response he advised the attendees to "generate excitement to expose your culture to the world."

Dapper Dan is just as good at human resource management as he is fashion design.

Dapper Dan surrounded himself with first generation immigrants with good work ethic—many of them were Senegalese. This makes sense when you think of the original location of his boutique being on 125th in Harlem, around the corner from Little Senegal. Dan recanted amusing stories of innovative management strategies when he faced a language barrier with his staff. There was the story he told of a product defect nobody would take responsibility for, knowing one of them would eventually return covertly to save his skin, he fired 23 of his tailors—effectively using game theory to subvert the loyalty in camaraderie. Most importantly, he stressed the need for staff with a good work ethic at the time because "gangsters and entertainers need their work yesterday."

Dapper Dan touches on how to build a luxury brand.

"Exciting is a currency in fashion," according to Dapper Dan. "Today, you need to latch onto something [or] someone who's exciting." And the man has a point. It's no wonder Gucci leads the top three most popular brands online according to Luxe Digital, followed by Chanel, who have done collaborations with the likes of Pharrell Williams and Cara Delevegne under the leadership of Karl Lagerfeld and Louis Vuitton,who recently appointed Virgil Abloh as creative director and done a capsule collection with Supreme. He brought it back home to say: "People wearing big Dapper Dan want to be connected to the story and excitement."

Dapper Dan became conscious of his identity by coming on tour to Ghana, Nigeria, Kenya, Uganda, Ethiopia, Egypt, and Tanzania with Lauryn Hill. The designer explained that he is constantly encountering hints that make him "conscious of his blackness." He says, "you either embrace it or run away from it." Dan also highlighted the importance of "symbolism in African culture" and the need to build new African narratives around them. "We need to create our own symbols and magic—it started here," he continues. He encouraged would be designers to explore their cultures and explore more with their designs in said context, but humorously cautioned to a cacophonous crowd, "Everything on your mind might not look good on your behind."

He reminded the audience that he started out making clothes for "people in Harlem dressing fancy to go downtown." Through this he has built a legacy that was borne of the need for luxury, to influence luxury fashion, from a place that was considered unfit to sell luxury items. The social programs he's involved in are also a response to this. According to Dapper Dan, everything he knows he taught himself. His dad only went to the 3rd grade, and his social mission is "to show kids how to get off the corner like I did."