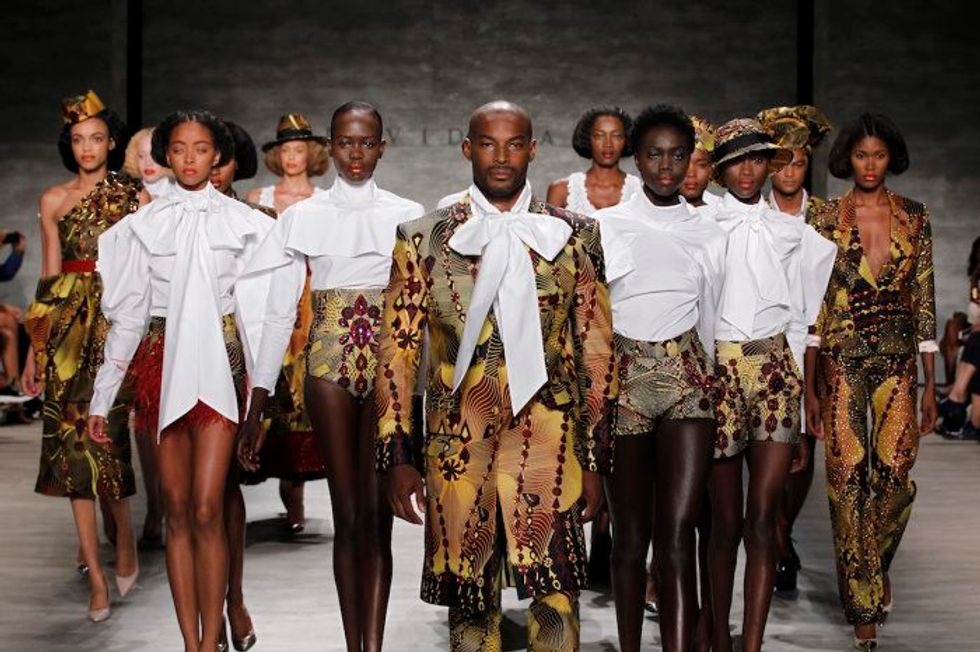 Presenting his now third collection to be shown at Mercedes-Benz Fashion Week New York, David Tlale's Spring/Summer 15 collection unveiled cohesive looks of affluent prints and patented burgundy-red off set with bold, pure white. In Tlale's words this spring collection aims to "[give]women back their power and [equip] them with a strong and confident sense of allure, without losing their essence and femininity." Led by Tyson Beckford, Tlale's army of models transitioned into looks of soft, whimsical coral-pink balancing the strength and femininity of the collection. Tlale, who has always believed in the empowerment of every woman, told Okayafrica back in February after his FW14 debut, "It’s not a particular race that wears fashion, every woman who is on the street, whether from a mass production retail to a luxury store, everyone wants to look good, everyone wants to look amazing. Everybody, every color, every race, every nation can be an icon."

Tlale launched his brand in 2003, winning the title of "Elle New Talent in South Africa" shortly after. In 2009 he was presented the award for "Designer of the Year" at Africa Fashion Week by international super model Alek Wek. This recognition allowed the brand to debut at Mercedes-Benz Fashion Week New York Spring/Summer 2010. Take a look at Tlale's latest show in the video below (with music from the Congolese Gospel Choir). For more from NYFW S/S 2015 see photos from William Okpo's "Academy Picture Day" and Africa Fashion Week.