Dope Saint Jude Has a Right To Flex 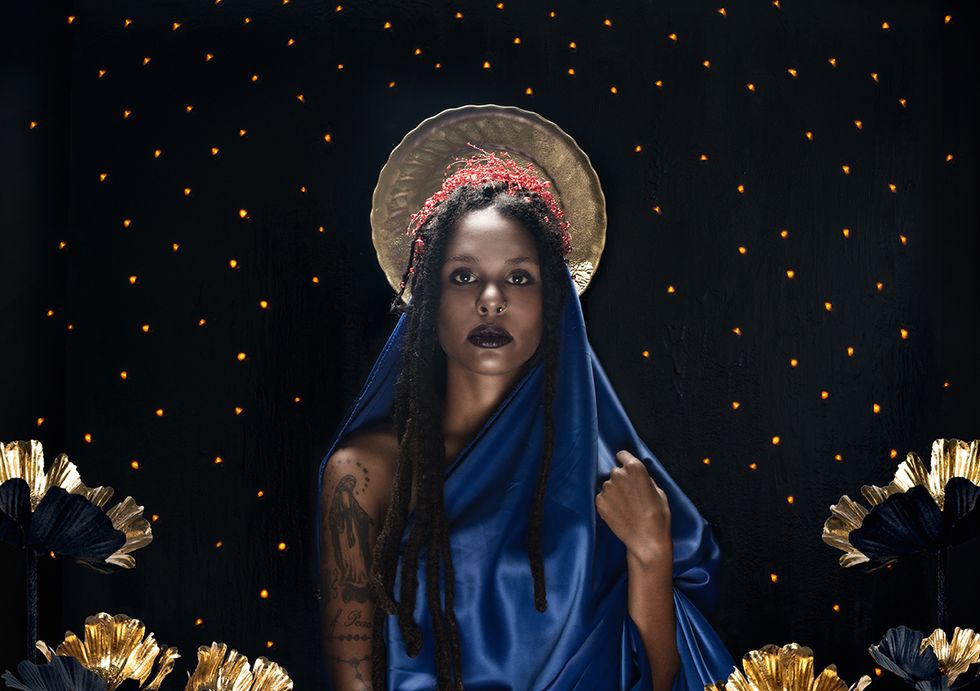 About three weeks before the release of her debut EP, Reimagine, Dope Saint Jude is all smiles. Her life has changed a lot in the past six months. The 26-year-old rapper from the Cape Flats is wearing a black leather dungaree, a Tommy Hilfiger sweater she says she bought at a thrift shop, and a pair of black Grasshoppers.

The rapper was handpicked by M.I.A. to be part of a campaign video she was doing for the retail giant H&M to raise awareness for Recycle Week in April. Prior to then, she was broke and hustling. Juggling rapping and waitressing to get by. The M.I.A. gig allowed her to become a full-time artist. Saint Jude is using the money to finance the recording of her EP, including paying for a new laptop and a photoshoot.

When I meet with her at a studio at Cape Audio College in Observatory, Cape Town, she’s putting the finishing touches on the EP, then untitled, with the Cape Town-based engineer Kay Faith. Having sat in on one of Faith’s recording sessions for Uno July’s Uno ‘n Only album, Saint Jude knew she wanted to use the same engineer for her project. She’s more comfortable working with a female engineer. “Sometimes it’s challenging for me to work with a male engineer,” she says. “Because of tension sometimes. It’s sometimes my way or your way.”

It’s been a month since the two began working together on the project. Saint Jude makes her own beats. “I produce at home,” she says, “and bring [the beats] here. Like, half of them are my own production, but Kay has fucked around with them and changed them a bit.” She then plays me a sketchy trap beat that Kay did the production on. “We also gave the beat to Psyko Beats to change the drums, because we wanted it to be vibey.”

Saint Jude recorded four tracks at Red Bull Studios last year. It was a learning curve for her. She was rapping over beats she collected from different producers, which is not how she prefers to work.

She’s clear about what she wants her debut EP to be. Production-wise, she wants it to have a hip-hop and orchestral feel. “My production style is inspired by Phantom Of The Opera,” she says with a chuckle. “When I was growing up, my dad listened to a lot of classical music. I come from a Catholic home, hence the ‘Saint’ in my name. The Latin hymns really impacted my life. There’s a lot of classical sounds on the project.” She’s referring specifically to the outro. A heavenly choir creeps behind sparse 808s, and she goes on to rap “It’s my right to flex, and it’s my right to shine.”

“With this track I wanted to convey that I’m a Cape Flats girl, but now I’m going to America and France,” says Saint Jude. “And I think about where my mother and grandmother came from–cleaning houses–it’s my right to flex. It’s a political act.”

She’s also clear about who she’s going to feature on the project. In today’s session, the rapper Andy Mkosi is recording a hook to a track which will go on to be called “Brilliant, Arresting, Extravagant.” On the hook, which is delivered in isiXhosa, Mkosi speaks of how colonialists swindled Africans’ land, over high-time hi hats and a raw bassline.

Most of the beats are minimal, consisting of a selection of synths, a bassline and drums. When robust drums kick in after the first verse of a track called “Romance and Realism,” it’s reminiscent of “Love Lockdown” from 808s & Heartbreak. We spend a few minutes discussing Kanye, who Saint Jude likes and is inspired by, before she paces around the studio, digs into her bag and takes out a deodorant bottle. “It’s Nicki Minaj’s deodorant,” she says as she sprays it on my wrist to smell. She’s a big Nicki fan. She also reveals she’s inspired by Bjork and Petite Noir.

“Yannick [Petite Noir] is someone who I can say I aspire to locally,” she says. “His dressing room at the Cape Town Electronic Music Festival was opposite mine. I felt so cool [she laughs]. I must actually send him a letter thanking him for the inspiration.”

What she admires about Petite Noir is how he pays attention to detail on every aspect of his craft–from his album artwork to his performance and the music itself. Saint Jude also believes in that kind of scrupulousness.

“The reason my shows are such high production is because of the drag queen culture in Cape Town,” she says. “I grew up around drag queens, who put a lot of effort into their outfits and the dances––it’s a production, it’s captivating. I want everything from the music to the performance to the outfit to the visuals playing at the back… it must all be towards one goal.” The rapper currently performs with two dancers and a DJ. She’s in charge of her own visuals on stage.

Saint Jude’s dream is fast becoming a reality. Reimagine reveals a young artist whose hard work is starting to pay off. She’s dealing with her own demons, just like the rest of us, but chooses positivity to counter them. “This sad life wasn’t meant for me/ my gran’ cleaned too many houses just so I can dream,” she raps on the outro.

She has every right to be happy, she sure has made major strides.

'Reimagine' is out now.

Sabelo Mkhabela is a writer from Swaziland currently based in Cape Town.