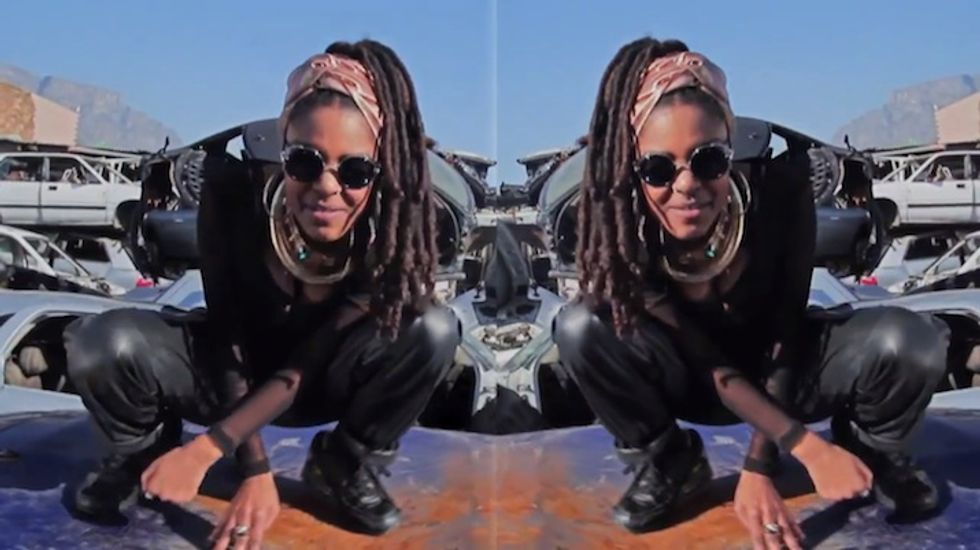 After landing on our radar a year ago with "Hit Politik," she's since released videos for "The Golden Ratio" and most recently "Keep In Touch," featuring new kid on the "Nu-Queer" block Angel-Ho. Shot and edited by Chris Kets (who previously worked on Boolz' Langa-shot "Aphe Kapa"), the clip sports a quirky array of voguing ninjas, bucket hats and brief vocabulary lesson in Gayle (Cape Town queer slang). On the heels of her latest video, Dope Saint Jude spoke with us about Cape Town queer culture, being a "boss bitch" and a coloured woman in Cape Town's rap scene and more.

Shiba for Okayafrica: So tell us a bit about Gayle ("gay slang used in urban communities of South Africa"). I've never heard it used in music before, is there a reason for that?

Dope Saint Jude: Gayle is Cape Town queer urban slang created by predominantly coloured men. It was created as a secret language for queer people to communicate with one another in spaces where being queer was considered deviant. I first came across Gayle hanging out with friends in the Cape Flats. I immediately picked up the language as it is extremely colourful and expressive! I did further research into the language and found it hard to find an online dictionary for it. This is because the Gayle language is constantly evolving and is picked up by spending time in communities where Gayle is spoken. One really needs to immerse oneself in the culture to pick up the language.

OKA: And you? What does the persona of Dope Saint Jude encompass and how does "Keep In Touch" emulate that?

DSJ: Dope Saint Jude is so many things, but if I can convey one important thing about me it is that Dope Saint Jude is an example to all girls. Dope Saint Jude is an academic, a thug, a rapper, a hustler, an activist, a producer, a community worker, a filmmaker, a party animal, a lover, a sista and a BOSS BITCH! 2015 is an exciting year for me because I am dropping my EP and mixtape, a few more music videos and I am directing my first documentary. I am also facilitating my community project called iNtombi Workshop, where we focus on arts education at a high school in Elsies River, my hometown.

OKA: As a coloured woman in Cape Town's rap scene, how do you see your presence being felt?

DSJ: My coloured identity has always been a difficult thing for me to deal with. I am a first generation coloured person, as I come from a mixed race family. I recognise my blackness, even though I am coloured. I feel a great sense of responsibility to my community and to young women, to be a role model and to work hard. I think it is so important for us to have our voices heard, to change voice of the media and to create the climate we want in South Africa!