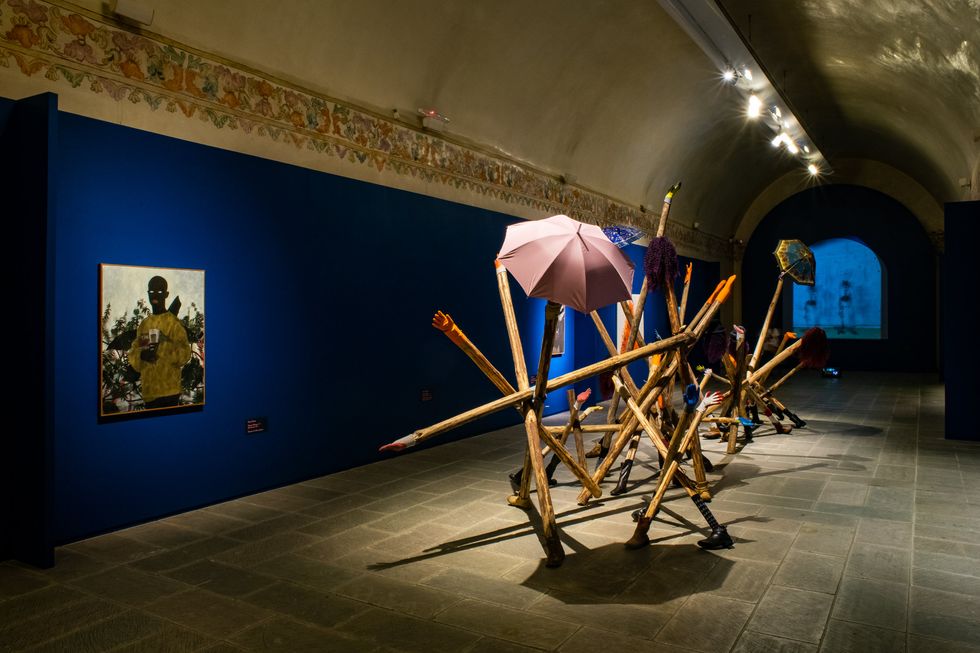 The Rain Prayers by Simphiwe Ndzube. Photo by Jalil Olmedo.

Crossing Night, is a first of its kind exhibition, creating dialogue between the two regions.

It's mid-morning in Oaxaca de Juarez, Mexico and the walls of ex-convento Santo Domingo de Guzman reverberate as a local marching band begin their procession playing, Hamba Kahle Mkhonto we Sizwe (Go well Spear of the Nation). One of several iconic songs of the Apartheid struggle in South Africa, sung as a custom by mourners at the funerals of members of the African National Congress's armed wing—the song was also famously sung at the funeral of Nelson Mandela.

The marching band was met by local Calenda dancers outside, before continuing their procession through the streets of Oaxaca onto the San Pablo Cultural Centre as part of the Grand Opening of Hacer Noche(Crossing Night). Although the significance of the song was lost on many, some South Africans included, the depth of the music appeared to touch the core of much of its audience.

Hacer Nocer is a program of exhibitions in Oaxaca Mexico, focused on art practices of Southern Africa. The event comprised of a month-long artistic residency program and a week-long educational program with talks open to the public, culminating in an exhibition of work by artists from Angola, South Africa and Zimbabwe. Ambitious in its conception and intended scope, Hacer Noche is the first exhibition of its kind in Mexico. The term Crossing Night alludes to themes of death, night journeys and the event coinciding with the Mexican festival of Dia de los Muertos (Day of the Dead). The exhibition touches upon the shared histories of slavery, colonisation and postcolonial narratives as part of the DNA of both regions.

Angolan artist Tiago Borgestook part in the residency program conducted atCentro de las Artes de San Agustín and has work in the exhibition. Borges's interests are in collaboration, working with sculpture, playing on words and visuals and disturbing the idea of the garden of Eden.

"I am often interested in site specific experiments," says Borges. "What happens on arrival to a place, what to consider and what form experiences have from the meeting to the interacting point of view". His work reflects on themes, such as history, life and the dance between death and desire in his work. Borges' fusion of words, visuals and sculpture take the form of a fanzine printed in blue over pink.

The fanzine is designed not merely for display in an exhibition, but with the intent of including the viewer, providing them with the option of ownership—to physically take the work, experience and marinate on its themes at leisure. He believes Mexico and Southern Africa have shared socio-political experiences including, lack of a unified identity, unequal access to resources and unrepresentative politics. "I hope this exhibition inspires the people of Oaxaca, especially the Afro-Mexicans who are forgotten" says Borges. "I expect the exhibition to inspire a young generation of sensitivities regarding other forms of creatively understanding and thinking about the community."

Hacer Noche curator Francisco Berzunza did his Master's of Political Science at the University of Cape Town, serving afterwards as cultural attache at the Mexican Embassy in South Africa. This gave him the opportunity to travel to other countries in the region. He says, "I felt a duty towards a country that has shaped me profoundly and a sense of frustration at the lack of recognition or acknowledgement of African art by Mexican institutions in general".

During his tenure in South Africa, he made a promise to friends to keep the relationship open. For Berzunza, the exhibition is a labour of love, friendship, gratitude while also providing an opportunity to open up a dialogue. "There are shared histories that we don't speak about," he says. "And we behave as if it's two distant places."

At ex-convento Santo Domingo, curious attendees, circle a large abstract structure with wooden beams, synthetic hair, used human shoes and synthetic gloves, dominating the centre of a room. This work "The Rain Prayers" is by South African artist Simphiwe Ndzube. It is a recreation of a work he made in Cape Town in 2016 as a result of partaking in student protests at the University of Cape Town and around the city of Cape Town. The work was inspired by an image of a collective group uniting in a processionary manner to rally for a common vision.

"As a child," says Ndzube, "I remember seeing groups of people going to the mountain to pray for rain—that strong collective faith, hands reaching into the heavens holding an invisible structure, receiving or sending their prayers to the all-seeing eye above". This work parallels the Day of the Dead—the processions, the collective belief of opening up and receiving the spirits. Ndzube's mixed media installation, its structure of wooden planks of varying sizes and lengths bound together, firmly grounded to the earth but pleading to the heavens above, conveying the collective's dance.

He notes similarities in the conceptual art and freedom of expression explored by artists in both regions. "The work is very accessible, it's a common language, using everyday relatable materials in a not so conceptually abstract final image," says Ndzube. He further highlights the relationship between religion and spirituality, "the mythologies and the nagging Christian religious influences" as pillars of both regions.

The journey through the many exhibition spaces spread across Oaxaca brings both light-hearted and jarring moments—art that reflects a wide range of human experience.

Hacer Noche exhibits works by world renowned artists (mostly South African) from the region, both living and deceased, including William Kentridge, Zanele Muholi, Santu Mafokeng and David Goldblatt and also exhibits works by artists whose profiles are rising. Whilst, the educational program provided a thought-provoking smorgasbord of talks both by artists and academics alike discussing topics such as artistic practices, biennales and identity politics.

Despite the grand ideals of the exhibition, there was a discernible lack of artists and academics of colour present, especially women of colour. One academic during her talk, raised concerns about the 'invisibility' of women of colour in attendance despite the display and discussion of their work. When the issue surfaces, Berzunza does not shy away from addressing it. Hacer Noche is his first curatorial role and he admits to making mistakes blaming budgetary constraints, lack of organization and planning. "Things should have been thought out better, relationships should have been built to achieve this," he says. "In the future these issues need to be addressed properly and instituted at a policy level in Mexico to avoid such a thing occurring again".

While no exhibition is perfect and won't meet the expectations of everyone, representing artistic practices of a region requires a balanced representation of its demographic in all forms. Securing a space at the table for people who have traditionally and continue to be overlooked is important for the credibility of cultural dialogue and exchange. Berzunza says, "I hope more shows evolve out of Hacer Noche, that artists from this region have more solo shows here that more dialogue opens up".

Hacer Noche, ambitious in its conception and execution, yet with creases, sets a precedent for opening up further cultural relationships between Mexico and Southern Africa. But making sure the arts are inclusive is not, in this case, the sole responsibility of the hosting nation. It is also the duty of powerful people in Southern Africa, to be aware of their own communities and to ensure there is true representation when planning further cultural exchanges.

Hace Noche goes till 5 February 2019 in Oaxaca Mexico. See more pictures from the exhibition below.