3 Students on the Front Lines of #FeesMustFall at Wits 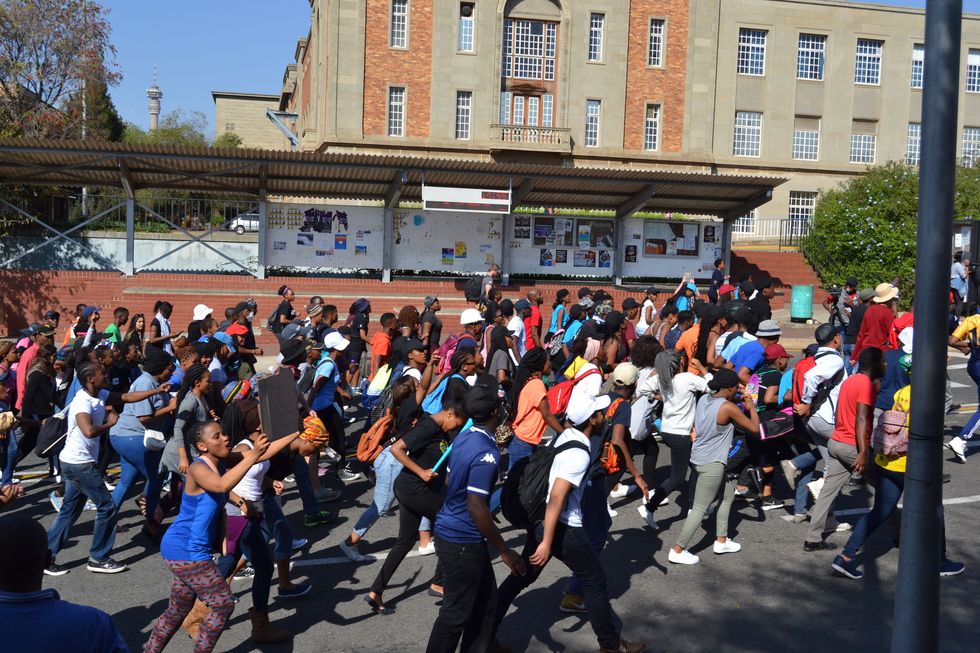 This week marks exactly one year since the start of #FeesMustFall in South Africa. We asked Wits students to reflect on the movement.

This week marks exactly one year since students at the University of Witwatersrand in Johannesburg began protesting in response to a proposed 10.5 percent fee increase. Since then, Wits has been the center of the Fees Must Fall movement. (It’s important to note that before the protests returned and took shape this year, other campuses across the country had already started protesting, mainly the University of Kwa-Zulu Natal in Durban.)

The Fees Must Fall protests returned to Wits’ campus this year when, on the 19th of September, South Africa’s Minister of Education and Higher Learning, Blade Nzimande, announced it will be up to the individual universities to decide if they’ll increase fees for the 2017 academic year, with a suggested cap of eight percent.

Following this announcement, the Wits University campus erupted in protest as students, who had gathered inside Solomon Mahlangu House to watch the announcement, rushed across the campus to block all entries in an attempt to force the university to declare an official shutdown.

Students trying to enter the Great Hall at Wits. Photo by Candice Wagener.

The following day, students took to campus to protest the proposed fee increase and demand “free, decolonised education.” This would mark the start of a three-week-long protest that has been marred by spurts of violent clashes between students and police.

Another confrontation occurred between protesters and police on the third day of the shutdown, the 21st of September. A meeting protesters held in Solomon Mahlangu House (the admin block at the heart of the University) resulted in student leaders deciding there was a need to mobilise students from other higher learning institutions around Braamfontein. The protesters were stopped by police on the way to Boston College, a private higher-learning institution in Braamfontein, and were told the police would open fire if they refused to disperse. The students decided to return to campus, but just before they entered Wits campus, stun grenades and teargas were fired. Prior to police opening fire on students, a female student sat down in front of the police and began to study. “You will not shoot me for studying,” she proclaimed.

The standoffs came to a head last week, on the 4th of October, when police opened fire on protesters who were attempting to have a meeting outside the Great Hall piazza. The Secretary General of the Wits Student Representative Council, Fasiha Hassan, told media that the violence was unacceptable. “We will not have Habib’s Marikana” [Habib is the university’s vice chancellor], Hassan said. Students called for peace and offered flowers to the police as a gesture signifying that they wanted the violence to stop. Cartridges from the rubber bullets were filled with flowers and placed on the steps of the Great Hall. Another group of female protesters attempted to prevent police from shooting by baring their chests. They approached the police with hands held above their heads, shouting “please stop shooting us.”

SAPS in Braamfontein, Johannesburg on 10 October, 2016. Photo by Alyssa Klein.

On the 10th of October, Wits University said the academic programme was set to continue. In the morning, protesters began to disrupt lectures and police confronted the students outside the Great Hall steps and fired rubber bullets and stun grenades to disperse students once more. Protesters escaped into Braamfontein, where a large crowd gathered. Protesters started blocking roads with concrete bins and prevented cars from passing. Two armoured trucks were driving around Braamfontein, firing stun grenades, teargas and rubber bullets in an attempt to disperse the protesters. A bus was also set alight by protesters and protesters pelted fire rescue with rocks.

Throughout #Fees2016, there has been a noticeable lack of student voices in media coverage of the protests. It’s vital that students are able to share their experiences from the frontlines of the movement and the violence they’ve been confronted with.

Here are a few experiences of students and student leaders that have been involved with the protest in some way or another at Wits University.

“I have seen the most violent scenes in my life during the last few weeks. Police brutality has gotten out of hand. I have been trying to move from place to place for my safety with continuous threats on my safety. FMF is not just a protest, it has become a journey to the promised land. We have been tear-gassed, beaten, sexually assaulted, raped, intimidated and harassed as a movement. We are not treated with dignity nor are we able to speak. The state has silenced us many times over. In times of peace any time the police arrive we are forced to act in self-defense.

I joined FMF because I have been financially excluded. It took four years before I could return to attempt to complete my degree. The anger we see across the country has been distilled from generations before us being unable to reach the promised land of Azania. We want to be equal, we want to finish our degrees without black tax waiting for us at the end or the withholding of our degrees till we have paid up. Black students want to be heard. We are not the privileged that can afford to return to class in silence.

[On 10 October] police came onto campuses with Wits police dogs to harm us—this looked eerily similar to scenes we have seen in history books from the ‘76 protests. We simply cannot end this year without a commitment. We cannot leave this score unsettled as it would be a disservice to generations to come. Our goal is that of free quality and decolonised education. It is not an unreasonable goal. We want to proceed with the academic programme, but what's the point if we can't afford to go back in 2017? Many of us have mountains of debt to deal with, many cannot eat because they cannot afford food, some sleep in toilet stalls and others in libraries because they have nowhere to go and no money for accommodation.

We are the hopes and dreams of our families who desperately want better lives. This movement is not a selfish one, but a noble cause which seeks to address inequalities which were quite simply swept under the carpet because of the myth of an equal society through the fallacy of a rainbow nation. We hallucinate a different time as Leigh-Ann Naidoo says, we do not simply exist in the now, but dream about Azania, a time and space where we are released from the shackles of oppression, where we can enjoy our land and resources. Free quality and decolonised education is not impossible—we have illustrated this to the state. It is for these reasons that it is so important to me to be part of this movement.”

“Being part of the protest has defined me personally. I was able to relate to people and used the space to understand other people’s plight, as we were all united under one common goal. I learnt more about the South African dialogue about privilege and access. I always knew what privilege meant, but the protests have helped me understand it better.

The violence was something that affected me deeply, especially since I experienced it, I knew what fear felt like and that fear brought me closer to fighting for this cause. I could understand frustration and pain and not just see it from a distance.

I also found myself more unapologetic to people judging and criticising the cause when they didn’t understand it or even witness it. It’s something I found close to me and I feel that the significance of the movement cannot be overlooked or underestimated any longer.”

“It’s been hectic taking part in the protest and it has challenged me physically, mentally and emotionally, like I'm sure it has for others. I think it’s an important cause to be a part of and I'm happy to have played a role in it, despite the fact that I may not have studied politics to know enough from an academic standpoint and may not agree fully with everything from the movement. Overall, I think free education is definitely possible and that in the wider sense of the topic, SA and the ANC should have a goal of getting back its roots by becoming more socialist and adopting the freedom charter.

As for the lack of support from non-black communities, [this] is indicative of privilege. That’s not to say that everyone should agree—people have different ideas of how the world should work. But to be unsympathetic or to not have a stance is unacceptable. #FeesMustFall speaks to so many societal issues in SA that are unavoidable and need to be addressed. I’m astounded that people will overlook the pain of others without trying to understand it, to revolt against a movement that is about upliftment, an end to poverty cycles and a way for the majority of South Africans, in particular the black child, to reach their potential and be educated because it is an inconvenience in their lives.

The fact that these kids were escorted by the private security and untouched by the police shows the extent of their privilege. They were a small group who should not have gained as much media attention as they did. It was great to see people see what it’s like to have to fight for something they believe in—albeit all of ten minutes of sitting in silence—and for other kids of all races to stand up to them.

Every revolution is uncomfortable, and we're fighting for the revolution, the future, and the youth to be educated. I think other people tend to live in isolation and get very comfortable in that space. However, ignorance and a lack of understanding for something that you may not face personally, is no excuse to overlook a national crisis. I do think more people are coming around though, to the cause and in terms of trying to bring these ideas to their communities. I think students have been successful in bringing these discussions to the dinner table and for gaining more support. It's no secret that the student movements are painted badly in the media so I can understand how the message may get distorted for those whose only means of understanding or insight what’s happening. With that being said, it’s tragic to see that people care more for buildings and the following of rules than they do for the lives of others, enough to justify the actions of the police.

FMF has gotten to a difficult point, where we are at a deadlock it seems. I for one am against the closure of universities. I think this is counterproductive and the wrong way of going about things. Despite all of the different viewpoints and voices of the movement, I have been impressed by how the students have worked together, organised and lead the movement. I do think that it’s time to take this to government and to be unrelenting.”