Fees Must Fall Reloaded: What Does It All Mean? 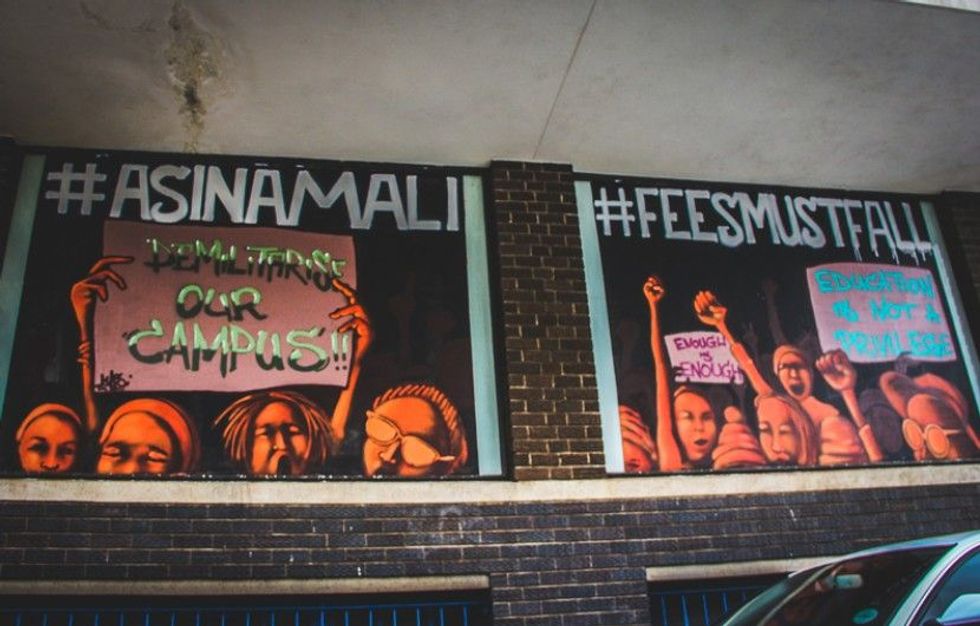 Here’s everything you need to know about the return of South Africa’s #FeesMustFall student protests.

September 2016 marks almost exactly a year since South African students took up arms and shut down every major university citing the excessively high rate of tuition fees. The movement, largely apolitical, was led by a small group of student leaders who after marching down the streets in solidarity went to storm South Africa’s Union Buildings in Pretoria, resulting in President Jacob Zuma declaring a zero percent increase in fees in 2016. Fast forward 11 months and it seems like a glitch in the matrix has caused a bit of deja vu.

With renewed protests erupting at multiple universities across the country we look at the question on everyone’s mind: what does it all mean?

The principal premise of the initial #FeesMustFall protests in 2015 was that tertiary education in South Africa is extremely expensive and the annual fee increases continued to marginalize a new group of young people every single year. The idea was that the Department of Education should cease with the fee increments and look towards plans to make tertiary education free for all.

What Led Up to It

On Monday, Minister of Higher Education Blade Nzimandemade his long-awaited announcement on the pending tertiary school fee increment for 2017. Nzimande announced that the decision for fee increments in 2017 will be left up to the tertiary institutions but has suggested that it shouldn’t exceed eight percent, seemingly absolving government of the burden of the decision and responsibility of having to decide whether students would still pay more for tertiary education despite the national shutdown that led to President Jacob Zuma announcing a zero percent increase late last year.

Fallist Simamkele Dlakavu couldn’t have put it more eloquently when she said “People [are] outchea romanticising shut downs. We cannot put our bodies on the line again for another 0% increase. Free Education must happen now!”. In essence if the fight doesn’t shift from another zero percent increase discussion to a free education discussion we could be seeing national shutdowns every year for the foreseeable future.

People outche romantising shut downs. We cannot put our bodies on the line again for another 0% increase. #FreeEducation must happen now!

Former PYA SRC president Nompendulo Mkhatshwa, Wits EFF leader Vuyani Pambo and Mcebo Dlamini were at the forefront of last year’s National Shutdown and it seems incoming Wits SRC president Kefentse Mkhari is following suit. After Nzimande's speech, Mkhari declared that the student body will not accept this announcement and that they are shutting down Wits University.

There also seems to be an internal power struggle between Wits EFF student body and the PYA (Progressive Youth Alliance) regarding what direction the protests should take, with PYA saying free education should happen in our lifetime while the Wits EFF wants free education now.

The main hashtag online is #Fees2017. It features the latest updates on what’s happening on all the major campuses around the country.

#FeesMustFall2016 is being used in conjunction with #Fees2017 and is being used by most of the mainstream media houses, so if you’re looking for commentary from traditional media this is the hashtag to follow.

#FeesMustFallReloaded is the older of the three main hashtags and was first used back in early September when renewed talks of another major student started, so if you’re looking to see how the online conversation was sparked by the Fees Debate in parliament then this is the hashtag to follow.

The Daily Vox has been the premier publication to follow since the Fees Must Fall protests first started in October last year. They received critical acclaim for their coverage of the protests because they utilized the the advent of citizen journalism, a great achievement for a publication that started as an experimental news portal during the 2014 national elections.

What to Expect Next

After the blowout of the last Fees Must Fall protests a Commission of Inquiry into Higher Education and Training (or Fees Commission) was set up by President Jacob Zuma in January 2016 with the sole purpose of finding a way to make higher education in South Africa free for all. The commission has caused even more tension between student bodies and universities with the former calling the commission “toothless” for not taking a more aggressive stance and the latter labelling free education as unreasonable.

Many universities still rely on tuition for over half of their income and if free education is implemented then those institutions cannot look to government for aid with most of the universities facing a financial loss due to excessive student debt. Over and above this, the Department of Higher Education has told universities to set aside money for equipment and infrastructure damage caused during the protests, which is estimated to cost about R25 billion. It’s expected that talks will break down between student bodies, universities and the commission and we could be seeing unresolved strikes every year for the foreseeable future.