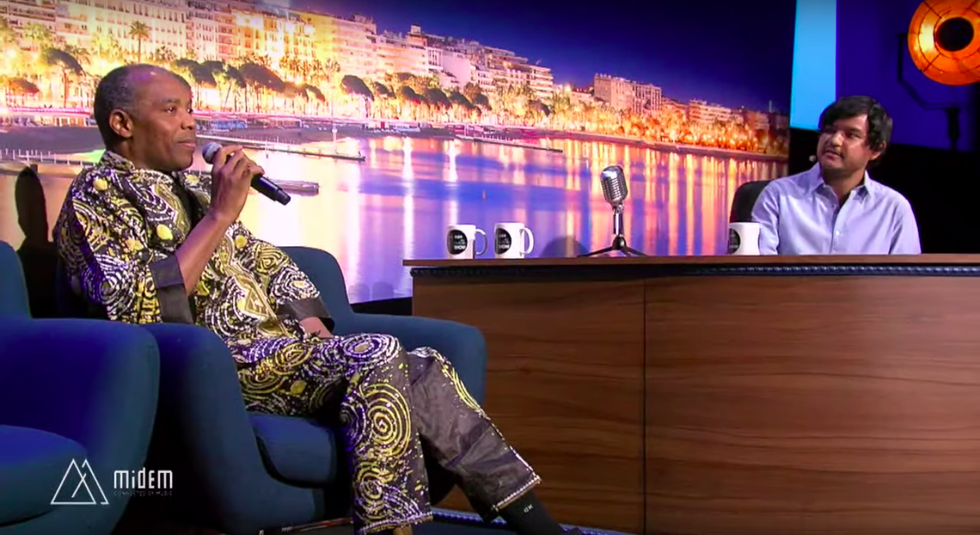 The renowned afrobeat musician sat down for a keynote session with OkayAfrica's music editor at Midem Music Conference in Cannes, France.

Midem, the annual music conference, described as "the leading music industry event for the music ecosystem" is currently underway in Cannes, France and OkayAfrica is on the ground for the action, starting with a keynote session with the legendary Femi Kuti.

In an extensive interview with OkayAfrica's very own music editor Kam Tambini, the celebrated afrobeat musician and head of the New Afrika Shrine, speaks on his vision for empowering new African musicians, the current status of afrobeat—the genre spearheaded by his father—the power of music in addressing pressing global issues, his new album and much more.

READ: Femi Kuti Is Leading Afrobeat Into the Anti-Trump Era

The artist spoke in detail about passing on his musical legacy to his son who is also an artist, and the importance of young artists pursuing music out of passion instead of fame that it brings. "Music inspires every other profession" says Kuti, likening being an artist to being a doctor and helping to alleviate listener's pain. "Music is a medium that higher forces use to give people joy and love," he adds. He urged new artists to study their craft, and advocated for better learning institutions on the continent for aspiring artists and musicians.

When asked about young African artists like Davido and Wizkid who are striving for crossover success in global markets, Kuti urged them to look beyond "gimmicks" and focus on making music that leaves an impact in the long run.

He also spoke about the fight for social progress on the continent. "Do we surrender to injustice, or do we stand and confront this injustice," said Kuti, adding that it will likely be younger generations who will hold the torch in tackling these issues. "They have to fight for a better life for their children, and for their neighbors," said Kuti.

The artist, who was named Midem 2019 Artist Ambassador, was later joined on stage by producer Sodi, who spoke about his experience working with both Fela and Femi Kuti, and resisting making "standardized African music."

Check out the full interview below.