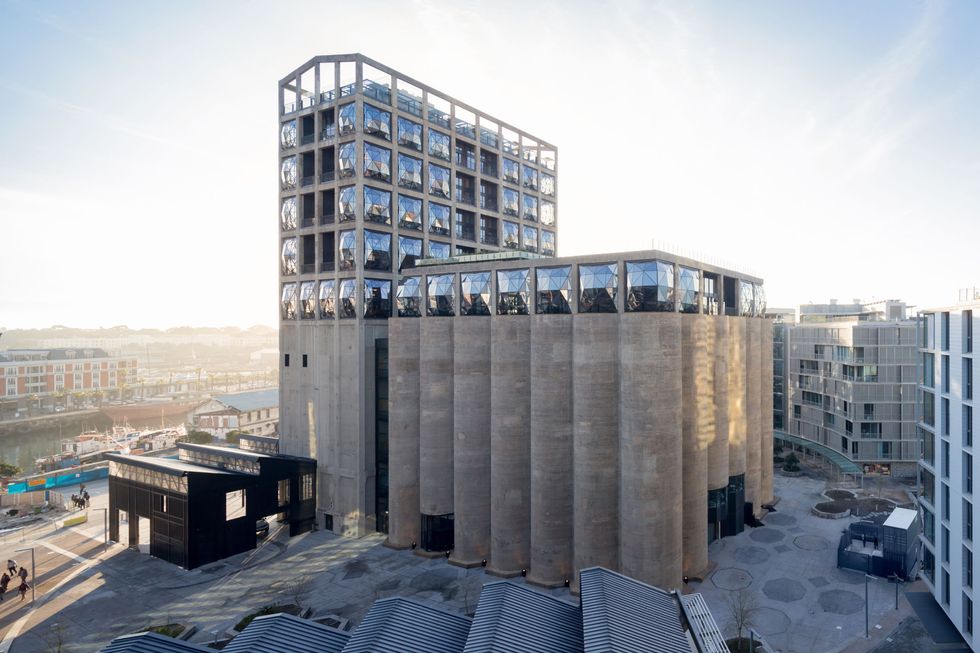 Next week the new Zeitz MOCAA—the world's largest museum dedicated to contemporary art from Africa and its diaspora—will open its doors in Cape Town. We got a sneak peak.

Today marks the beginning of the preview weekend for the new Zeitz Mocaa, a new contemporary African art museum on the Cape Town waterfront, meant to showcase work from the continent and its diaspora.

The museum is housed in an arresting new structure, a heroic revamp of some century-old grain silos that have long dominated the mix of ship-works and tourist-oriented development around it. Probably the most impressive aspect of the architecture is the interior where British-architect Thomas Heatherwick has cut into the honeycomb like matrix of the silos to create a grand atrium that blends the biomorphic with the brutal—like entering the petrified intestines of an ancient sea creature.

According to Heatherwick the process of reshaping the old structure was about stripping things away and discovering the hidden shapes and materials within it:

"Concrete is often associated with brutality and a hardness—a coldness. And the first test we did of getting the paint off was very encouraging because we found that the concrete wasn't cold. The concrete had warmth. And stones inside this which you can't get in new con concrete now. We had blue stones, many of which come from from a quarry at the base of table mountain."

For such a prestige architectural project, however, the actual galleries feel like an afterthought with much of the windowless space coming across as cramped and dark. Perhaps it's only a function of the preview status this weekend but to see the art one has to navigate through a maze of closed doors with little signage to point the way. It's a bit like getting lost in a hotel "back-of-house." And knowing that much of the space, in fact, sits underneath a luxurious and airy Silo Hotel, with room rates as high as R140,000 per-night [or about 4 times what someone on SA minimum wage would make in a year] kind of gets to why the project has faced some criticism in its conception.

The gallery—though a non-profit institution—was funded by the privately owned Victoria & Albert Waterfront and the design of the building emphasizes the nature of the area as a space for consumption and profit aimed at a global clientele. But none of this is suggesting that there isn't amazing art here, just that there's a bit of a disconnect between what is meant to be Cape Town's marquee public cultural institution and what instead feels like a public gallery wedged into a private space. But this is 2017 after all.

Inside the galleries can be confusing and a bit dark. Photo: Aaron Leaf

Yes, but what about the art?

If you've followed OkayAfrica for some time you'll recognize many of the major artists we've covered make appearances at the new Zeitz Mocaa from the celebrated South African photographer Zanele Muholi to the British-Nigerian master, Yinka Shonibare and many more big names.

The permanent collection is on long-term lone from Jochen Zeitz, a German businessman whose foundation's stated aim is this:

And it is really marvelous to see all these pieces together. Standouts include the opening exhibitions from artists like Angola's Edson Chagas, South Africa's Nicholas Hlobo—whose magnificent iimpundulu zonke ziyandilandela or Lightning Bird hangs imposingly above the atrium—as well as the separate Centre for Performative Practice and Centre for the Moving Image.