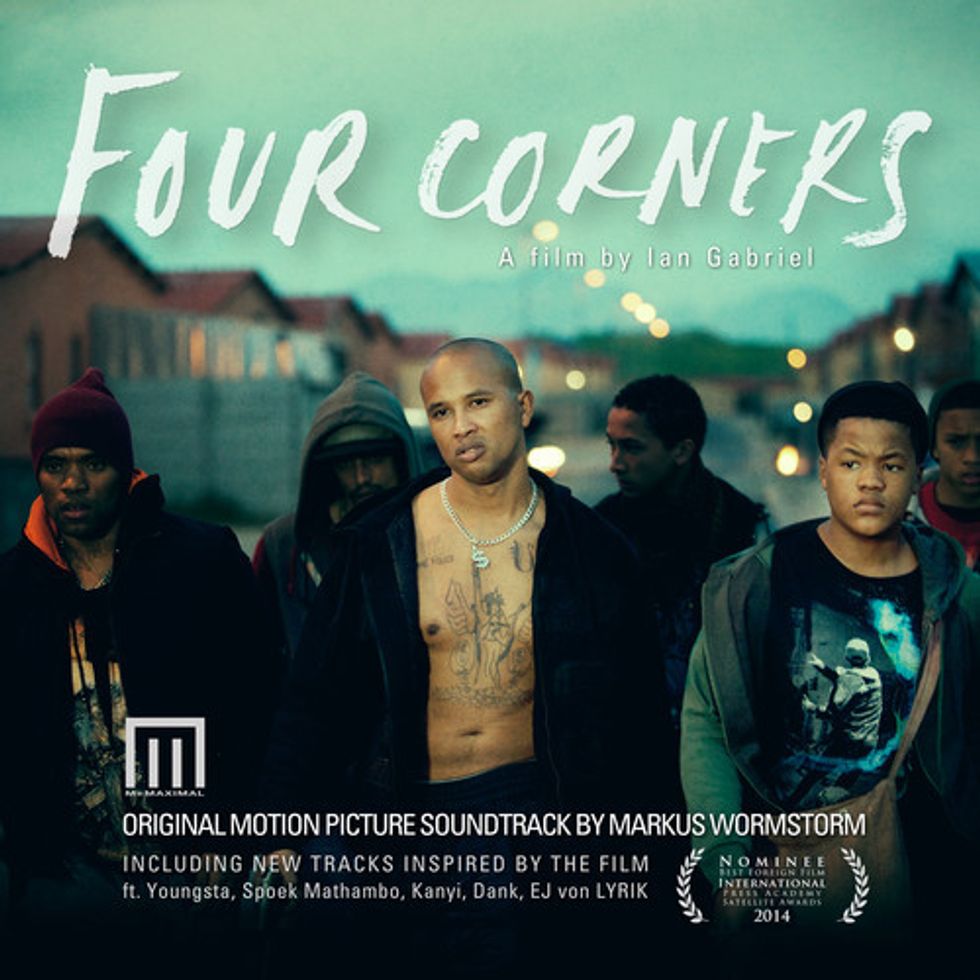 Okayafrica caught up with South Africa's Markus Wormstorm and Hemelbesem to discuss the 'Four Corners' soundtrack.

Released last week, the gut-wrenching and beautifully made South African film Four Corners has already provoked many a conversation regarding the South African film industry and the subject of gangsterism in the Cape Flats. Beside the film making the cut at Design Indaba’s 2014 Film Fest, as well as having been selected as the official South African submission for the Best Foreign Language Film at the 86th Academy Awards, there has also been controversy about the nature of its making. Whatever your opinion might be regarding the film's authenticity, if anything, the soundtrack composed by Markus Wormstorm is a fantastically implemented blend of the uniqueness of South African vernacular music alongside the intensity of Cape Town’s favourite electronic sounds. With artists ranging from the immensely talented emcees Kanyi Mavi and Youngsta, to the multi-faceted Card On Spokes and Felix Laband, to jazz aficionados Lee Thompson and Kyle Shepherd, this soundtrack provides a great showcase of the often overlooked Afrikaans hip-hop genre known as Rymklets, alongside the kind of music that gives our city its edge. We caught up with Mr. Wormstorm and Rymklets advocate Hemelbesem to discuss the making of the film’s soundtrack and its social intricacies. Read on for the full Q&A and stream the Four Corners soundtrack in full below.

OKA: Tell us about yourself, and the man that is Markus Wormstorm.

Markus: I’m musician/electronic producer. I have a studio in Cape Town called Honeymoon which I run with my wife, Alison. Day to day I do music supervision for various campaigns from commercials to Apps and films... I try to stay busy. I’ve just finished my second novel and I’m really into flying drones at the moment.

OKA: And you Simon? What is the alias Hemelbesem all about?

Simon: ...Simon Witbooi is a complex individual, a pursuer of truth, and a lover of arts. My wish is that my contributions in the art world will add value to the exisiting one... I operate under the alias HEMELBESEM which in Afrikaans means “a very tall/big person” but directly can mean “heaven broom.” My alias holds a lot of meaning to me and to most of my listeners, yet it remains open for interpretation to newcomers.

OKA: Now that the soundtrack is out, how do you feel about having your work on such a successful film?

Markus: Honoured. It’s by accident that I had the opportunity to pitch on the film score. I feel really blessed that everything went so smoothly and that I got to work with such a fantastic team as well as collaborating with a man like Ian Gabriel.

Simon: Well I’m happy my song was selected and I’m also happy with the placement of the song within the film, since it speaks to the complexities of life and decision making.

OKA: Walk us through what the process of creating these tracks was like, from beginning to end. How did you go about selecting the artists, the collabs, etc? Did you always have a idea of your direction for the score?

Markus: That’s a very involved question, as I can go on and on about the technicalities that gave birth to each song. In broad terms, I began by isolating various themes in the film. I did this by creating video edits of the scenes in which the individual themes are apparent. Then I improvised to picture until I was able to capture each theme...I then recorded tuba, french horn, cello and violin for the cinematic tracks. There after I began crafting the music to picture... I was done a month later.

Markus: It was kind of like a social experiment. I’ve always wanted to set up an augmented reality puzzle game that involves google maps and riddles to lead people to places in the city. There was graffitti at these places which lead people to flash drives cemented into walls. These flash drives contained some mixes I made exclusively for the campaign. The guys at Four Corners wanted to do something interesting and I guess I seized the opportunity.

OKA: We hear that some people have responded negatively to the film. Why is that? Is it because they feel that the story is not true to the reality of the Flats?

Markus: Superficially it seems that people feel that the movie condones gangsterism and violence... but I think this only goes skin deep. I think at the heart of the matter sits a feeling vulnerability at having a hurtful reality exposed. Violence and gangsterism are subjects used in many films -- so what makes this different? I think this critique is due to the fact that this is the first big feature film to portray Cape Town’s Gangsterism.

Simon: Look... you’ll always get that. Successful movies starring so called “colored” [mixed race] people is a scarcity, and so is RECEIVING such movies… Our people are finding ourselves on foreign ground on both accounts. Same goes for Afrikaans for instance. We became comfortable hearing words like God, ass, etc in English but to hear it in Afrikaans...still take it with a pinch of salt. It's the nature of where we stand as a culture, and as a country, in respect to the rest of the world. For me personally, it's a story of conflict, and how people try to deal with the hand they’re dealt. My demographic and myself as well, are huge fans of a movie like Blood In Blood Out, so I am actually surprised at the negativity toward the script of Four Corners for instance.

OKA: And as a South African MC, how do you feel about the way that people interact within the scene and what can be done to improve upon some of the things that might hold us back?

Simon: Interaction differs from scene to scene, geographically. You get the “glamorous” scene in Jozi and most scenes around it, gravitate towards it, but Cape Town seems isolated. Partly because its getting pushed away but also because its isolating itself. It's not a bad thing though, since the culture is, in my opinion, preserved better that way. But commercially it becomes a struggle. I think the film industry and other visual channels should start to heed to the giant, that is Afrikaans Hip Hop. It is unique and it's proven to be commercially viable, and has soooo many varieties it can practically fit into any scenario. The Afrikaans Film Industry has already proven that it's gonna grow exponentially and with it, its music scene.. yet somehow “Rymklets” or Afrikaans Hip Hop is still on the outside looking in. Some of these investors need to take a chance and show faith in this art form, and the rest will follow suit. It’s gaining momentum, but i think it's growing slowly at the moment. One thing’s for sure though, when it breaks through, it will surprise a lot of the unbelievers...