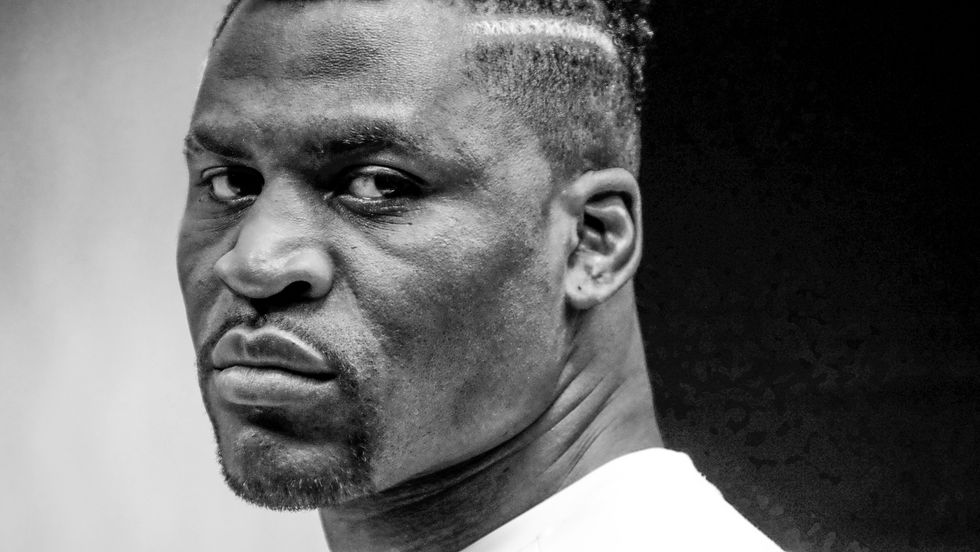 We interviewed the Cameroonian mixed martial arts star poised to be the next UFC heavyweight champion.

Does Francis Ngannou have what it takes to be the next heavyweight champion of the world? If you saw his fight, Saturday you already know. Over the weekend, Cameroonian-born Ngannou earned his sixth pro win with a brutal knockout of veteran MMA fighter Alistair Overeem. The win—his sixth stoppage in as many bouts—put him in the company of other UFC stars like Anderson Silva and Ronda Rousey both of whom started the same way. The win also qualifies him for a shot at UFC heavyweight champion Stipe Miocic. But Ngannou's story begins long before his rapid rise in the UFC ranks.

"Growing up in Cameroon was never easy," Ngannou tells OkayAfrica. "I don't know if you've ever been to Africa, but when there is war it is very difficult."

Francis Ngannou speaks in a deep voice with a heavy French accent, as he is still learning English, but nonetheless, learning quickly. In his soft-spoken manner, he sums up in a few sentences the long road to become the most anticipated young fighter in the world right now. Born in the village of Batié, Ngannou he "had the dream to become a champion," and a few years after leaving his home country, he is now poised to win it all.

Ngannou's parents divorced when he was six. After that his life became a transient one—attending five different schools, taking care of himself, eventually leaving his studies to try and earn money before moving to Paris, where he would be forced to sleep on the streets. Francis Ngannou is now competing in the UFC, the most important mixed martial arts organization in the world.

He debuted in the UFC in December of 2015. That night he knocked out Luis Enrique in the second round. In the following thirteen months, Ngannou stepped in the octagon cage of the UFC and fought five times, winning all five fights, four of them by knock out or technical knock out, including his 92-second knockout over former world champion Andrei Arlovski. In the MMA world, there is now no doubt who Francis Ngannou is.

"When many people leave their country they don't know what they're looking for," says Ngannou. "It's difficult because you don't know exactly where you're going. You're walking in absolute dark."

A young Francis Ngannou grew up in Batié dreaming of becoming a boxing champion like Mike Tyson. Mixed martial arts were not on his list of goals, but that didn't matter. "I am a man of opportunity," he says.

"It's very difficult when you arrive at a place, like Paris, and you don't have anyone" says the Cameroonian heavyweight. "But for me, it was an opportunity. At the time I didn't even have a place to sleep. I didn't have anything. But I didn't care about that because I'm happy. I was happy because I knew this was an opportunity for me to make something by myself and to progress."

When Ngannou first arrived in Paris with only a bag of clothes to his name, his search for accommodation came up short and his inquiries eventually led him to a parking lot. "The first night, I remember, it was like June, but it was very cold," he recalls. "So the next morning I asked someone for something to cover myself. The following week someone gave me a military sleeping bag... I slept in the parking lot for about two months, until someone gave me a room.

Francis worked odd jobs until he began to find some stability. He would rent a room on scarce income, but he would still find a way to send money to his mother in Cameroon. "That's how I started in France," he says. "I just continued working until things became better and better."

When asked if he was ever scared while facing homelessness in a foreign country, Francis answers immediately: "No. I was scared when I was in Cameroon. When I reached Paris I was not scared because I knew everything was possible. It was possible to have work, to have a better life… and I thought about those people who have helped me.

"In Cameroon it was not easy. I was also sick. I was very sick there. That scared me a lot too, and it was a difficult situation. When I arrived to Paris, I realized that I had the possibility of going to a hospital even if I didn't have money. So that helped me a lot to be confident."

Immigration has been a controversial topic in recent years. Refugees from war-torn countries are forced to seek safety and health in foreign lands, while others simply carry on to different places in search of that feeling that Francis felt in Paris, the sense of opportunity despite hardships and challenges.

"Everyone has their own goal, their own dream, and sometimes that leads you to immigrate," says Ngannou. "When someone immigrates because they have a goal or a dream, I think you should help them to become stronger. Immigration is too difficult when you don't have a plan, a dream or a goal. That makes it very hard. Immigration is something difficult. It's not easy, but when you have goals, it helps you to keep going."

Francis eventually ended up making his way to MMA Factory, a mixed martial arts gym led by Fernand Lopez in Paris. Ngannou stood out from day one. At 6 foot 4 (1.93m) and weighing around 260 pounds (118 kg), Ngannou is a large man, and Lopez remembers being impressed by Ngannou's movements and understanding despite being his first day of MMA. He saw in Ngannou a unique talent full of determination. He gave him a bag of clothes, training gear and asked him to please continue his training. Moments later, when Ngannou asked if he could keep his clothes at the gym, Lopez understood that Ngannou was homeless. He offered his gym as a temporary place to stay and began helping him to get a room. This was a turning point for Francis. Only a couple years later, Ngannou has earned himself a title shot.

It's during trips home to Cameroon that Ngannou really feels the weight of his rapid success. "Now I want to give something back for my village," he says. "I have loved boxing since I was very young. And when I was a child I would have liked to meet someone at that time to have something to help us. That's what I want to do, to help someone like I wanted someone to help me."

Ngannou stands behind a black curtain waiting for his call. Cameras surround him as he wraps his hands and gets ready, they follow him all the way up to the curtain, and the officials finally tell him its time. The Cameroonian heavyweight steps out and the sold-out stadium roars. Cameras flash, people reach out to greet him. People are excited. Ngannou makes his way to the cage, the expectations are high. He is a giant. He is a force. He has earned his place and respect. Fighters know his name, fans know his name, experts know his name, all of the MMA world now know Francis Ngannou. But those culminating minutes that compose the spotlight he's worked for in his search of becoming a champion one day are just a small fraction of what Francis has done, and his journey is not done.

"No one used to support me. They would tell me follow with your life. You don't have anyone to support you, you don't have any money, it's very difficult. So people say this is not possible, but I say this is my dream. I'm going to try. Maybe I'm wrong, but I'm going to try. That was my decision. No one would support me. But I always focused and I always had my goal", Francis states firmly.