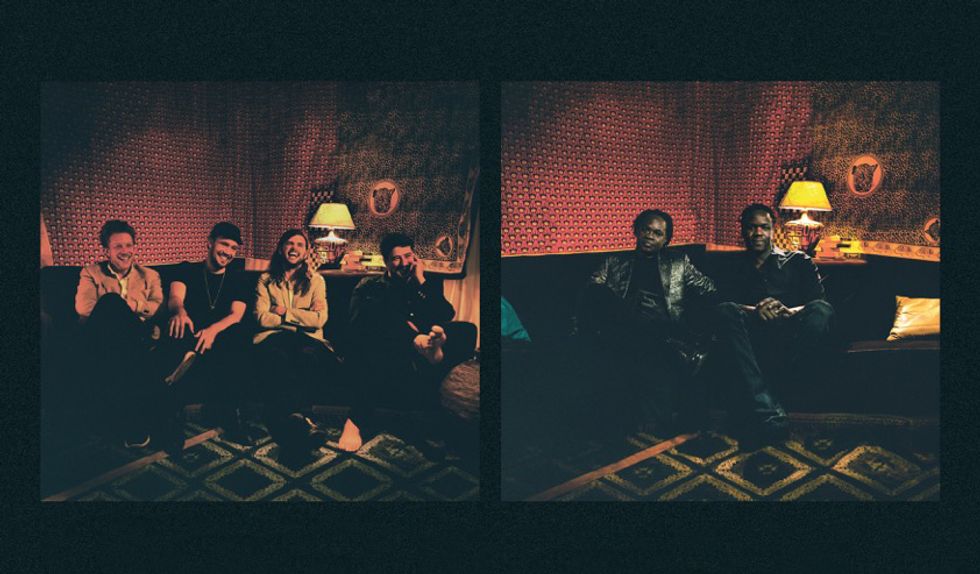 The exhibition will explore the making of the new album Johannesburg featuring Baaba Maal, The Very Best, and Beatenberg.

Mumford & Sons and Gentlemen of the Road are pleased to announce the launch of a free pop-up exhibition at Okayafrica’s Okay Space in New York this summer.

Launching on the 14th of June, the pop-up celebrates the culture and beauty of South Africa, a country the band toured and fell in love with for the first time earlier this year, and puts a spotlight on some of South Africa’s best artists and photographers.

Mumford & Sons: “We had such an amazing time touring and recording in South Africa that we wanted to share our experiences and shine a light on the vibrant, creative culture we have grown to love out there. The appetite for live music is huge and the youth culture is exploding with energy and rejuvenation, so we want to showcase that.”

The pop-up will follow the release of the band’s ‘Johannesburg' mini-album with Baaba Maal, The Very Best, and Cape Town’s favourites, Beatenberg on the June 17. It was recorded at the South African Broadcasting Centre in Johannesburg over 48 hours back in February 2016, and book-ended by six wild, sold-out shows of the country in rarely used sites. It was an incredible introduction to the country, and one the band are passionate about sharing with their fans.

The exhibition will display behind-the-scenes photography by the band and never before seen documentary footage from their tour.

A full daily program of events for the exhibition will be issued in June, featuring intimate live performances from Beatenberg, South African wine tasting, DJ sets and a host of live music and an evening of film featuring work of acclaimed South African directors, curated by Johannesburg independent cinema The Bioscope.

"The pop-up will be open to fans through Mumford & Sons’ sold out headline shows at Forest Hills Stadium on June 16 and 17, and on until the 19th of June.

Johannesburg—a South African Experience at the Okay Space, Brooklyn is hosted in association with Okayafrica and South African Tourism.

Check out the full details on each day below.

Sets from Safiyya Quintilian aka Funafuji and Xander Ferreira.

PANEL DISCUSSION: YOU’VE GOT TO HEAR THIS.

A night of musical discovery and stories from DJs, musicians, artists, and writers including Rich Medina, Will Calhoun, Sinkane, Safy-Hallan Farah, and Zandy Shejay. They will take us on an interactive journey through the African or African-inspired music that has influenced them the most.

Our storytellers will use personal anecdotes and snippets of tracks to illuminate what sounds have been most formative and inspirational in their journeys as creators.

SCREENING: “THE PEOPLE VERSUS THE RAINBOW NATION”

We’ll host a screening of “The People Versus the Rainbow Nation,” a documentary by Lebogang Rasethaba that looks at the current student uprisings, and how they link historically.

Make music from found sounds around the area with Freshlyground’s Kyla-Rose Smith and emcees from the township of Nyanga in Cape Town, South Africa.

BIOSCOPE FILM SCREENINGS: INCLUDING “LOVE THE ONE YOU LOVE”

The Bioscope is curating an afternoon of short films including “Love The One You Love” by Jenna Bass. The Bioscope is the only truly independent cinema in Johannesburg screening local content, documentaries and cult classics.