George Weah Will be the Next President of Liberia 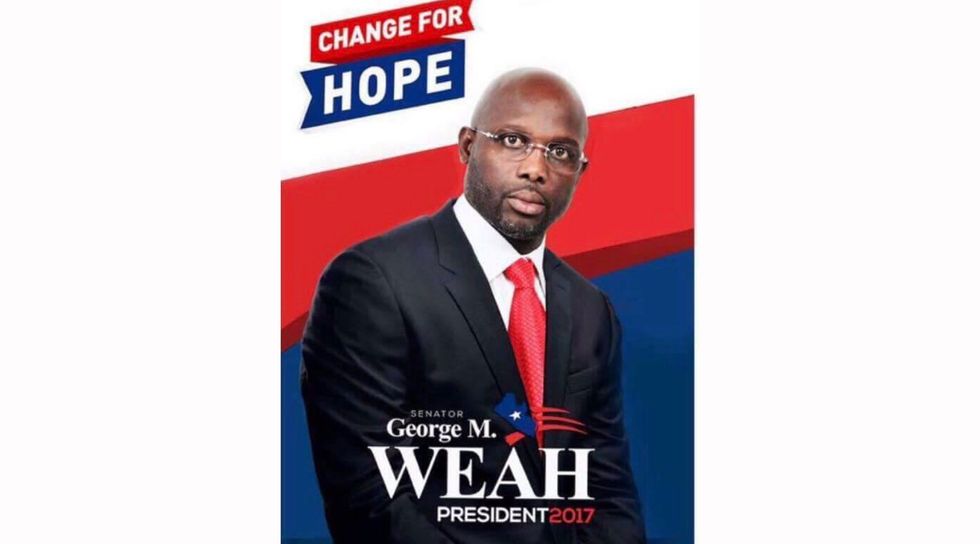 The football superstar has won the runoff election and will be sworn in next month.

With 98.1 percent of votes cast, the Liberian National Elections Commission reports today that Weah is ahead by a decisive margin with 61.5 percent of the vote.

Weah, 51, is a former FIFA player of the year and a winner of the Ballon D'Or, the soccer-world's most coveted individual prize. He's famous internationally for his tenure with the clubs Paris Saint-Germain and AC Milan in the 1990s and later with Chelsea and Manchester City in the UK.

But while Weah's soccer abilities are well known, his political instincts are harder to pin down and Liberians are trying hard to anticipate his coming administration. Many are hoping his win signifies a new chapter of change in a country disillusioned with the widespread corruption and stasis of Sirleaf's administration.

At his party headquarters outside Monrovia, tears streamed down Weah's face as he greeted supporters from a balcony. Outside, young fans ran through the streets and blared car horns as dusk fell over the city.

Notable is that Weah is from Clara Town, a vibrant working class neighborhood northeast of Liberia's capital-city, Monrovia. It's a place where both football pitches and homes must be constantly protected from encroaching tides on one side and evictions on the other. It's the kind of neighborhood where the majority of Liberians will live at some point and a milieu where no former Liberian president has ever come from.

His man-of-the-people bonafides aside, Weah has made some pretty odious alliances to get to the presidency. His running-mate and incoming Vice President, Senator Jewel Taylor is Liberia's former first lady during the presidency of her former husband President Charles Taylor, one of the main architects of Liberia's brutal civil war and convicted war criminal. Jewel Taylor is widely known as the lead proponent of Liberia's "kill-the-gays" bill that would impose a maximum penalty of death onto Liberians "guilty" of homosexuality.

Weah was also supported by former Liberian warlord Prince Johnson, notorious for his brutal style as a rebel general during Liberia's recent conflicts. Interestingly enough, Weah is also said to have been endorsed in all-but-name by Sirleaf herself who is said to have had a falling out with Joseph Boakai.