The 2017 Guide To Blackness At the Oscars 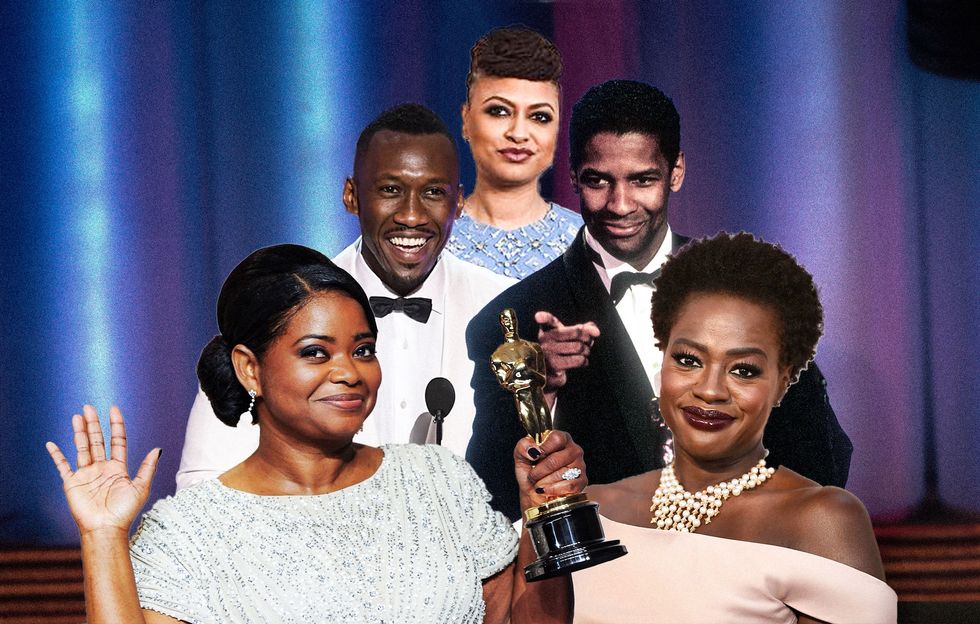 We've put together a guide to help make sure you get the blackest experience possible out of this year's show.

The 2017 Academy Awards are just around the corner, and if you're still harboring resentment from the Oscars' history of racial exclusion—particularly last year's #OscarsSoWhite—well that's just fine, you still have every right to be mad.

There has, however, been a noticeable change in the melanin to melanin-deficient ratio amongst this year's Oscar contenders. This year there's at least one actor of color nominated in each acting category, this has only happened once before in 2007. In total, a record six black actors have earned nominations this year. The documentary film category is made up almost exclusively of filmmakers of color, and three of the nominees for Best Picture feature a predominantly black cast, none of which are called "Hidden Fences."

While I'm not ready to start shouting in the streets that the #OscarsAintSoWhiteAnymore—let's not get too far ahead of ourselves here—the inclusion of black actors and filmmakers is worth noting and celebrating. It's not about gaining acceptance or validation from The Academy either. Black performers don't need Oscar recognition—they simply deserve it.

If any of this makes you more excited to watch the Oscars this year, we've put together a guide to help make sure that you get the blackest experience possible out of this year's show.

Ethiopian-Irish actor, Ruth Negga, is in the running for Best Actress for Loving.

Viola Davis earned her third Oscar nomination for Best Supporting Actress for her role, alongside Washington, in Fences, she was nominated in this same category back in 2008 for her performance in Doubt, and she received a Best Actress nod in 2012 for The Help. She is the most nominated black woman actor. Davis' costar in The Help, and the winner of the Best Supporting Actress award in 2012, Octavia Spencer, is up for the award once again for her role as Dorothy Vaughn in Hidden Figures. Naomi Harris is also up for the award for her role in Moonlight.

This means that three out of the five nominees for Best Supporting Actress are black women. I LIVE.

Moonlight director Berry Jenkins leads the pack with two nods, one for Best Director and the other for Best Adapted Screenplay. He and John Singleton are the only black directors to ever receive nominations in both categories. He is the fourth black person to be nominated for Best Director, after Steve McQueen, John Singleton and Lee Daniels. He shares his Best Screenplay writing nomination with, Tarell Alvin McCraney, making them the seventh and eighth black writers to be nominated in that category. August Wilson will also contend for the award for his screenplay adaptation of Fences.

With Manchester by the Sea being nominated for Best Picture, Kimberly Steward has become the second black woman, after Oprah Winfrey, to be nominated for producing.

Raoul Peck's James Baldwin documentary, I Am Not Your Negro, is also nominated, we spoke to the director about the making of the film last month. Ezra Edelman earned a nomination for O.J.: Made In America. Last but not least, Roger Ross Williams is also nominated in this category for Life Animated, he's won an Oscar before for Best Documentary Short Subject for his 2010 film Music by Prudence.

Four out of five of the contenders in this category are black.

You know that part of the show, when they're handing out the awards for all the technical stuff and you have no idea what's going on? Well, black people are nominated for those awards too.

Hidden Figures, Moonlight and Fences are up for the coveted Best Picture award.

So there you have it, our 2017 guide to blackness at the Academy Awards. While we're rooting for all the black contenders to take home awards, the Oscars get no award for finally doing what they're supposed to do. They're still not off the hook yet, though. Woman in non-acting categories and non-black actors of color remain markedly underrepresented. The Academy still has some work to do before they deliver their own "best performance."

The Oscars are live on Feb 26.