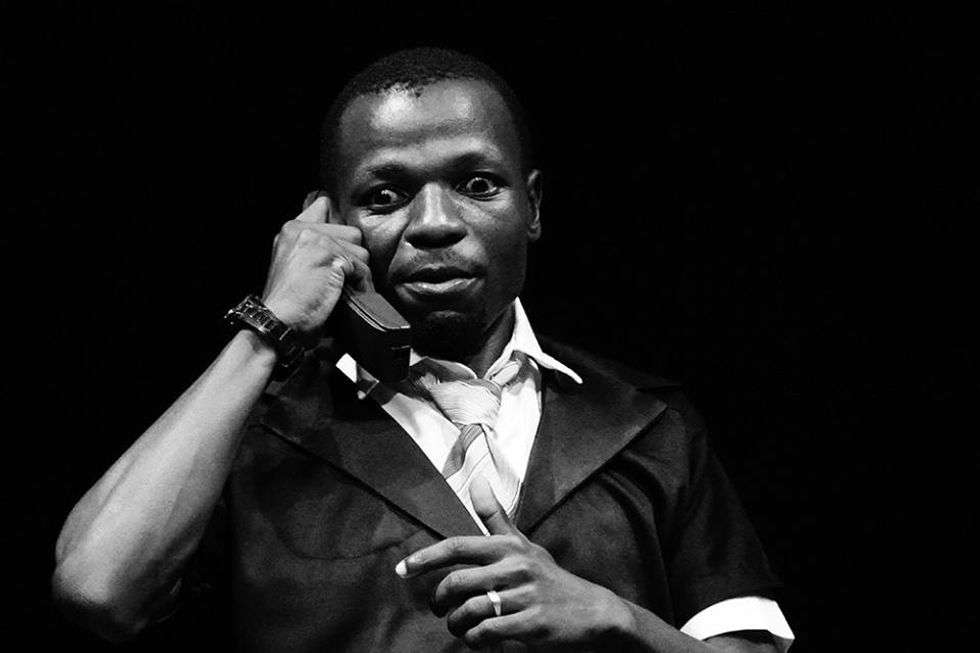 We go inside Harare's Theatre in the Park.

When you walk from the north of Zimbabwe’s capital into Harare Gardens––a semi-equatorial manmade forest on the edges of the CBD––you’ll notice a brick and mortar structure used as a restaurant. Surrounded by all these tall trees, the eatery looks out of place.

Walk a bit further, on the snaking tarmac pathways that link the park, and you’ll be confronted by an even stranger sight: shipping containers stacked on top of each other to form an auditorium.

This chic, post-industrial, 500-seater edifice goes by the name of Theatre in the Park. The space, the brainchild of veteran actor, director and cultural entrepreneur Daves Guzha, opened in March. It’s a return to the park, the playhouse’s original home for 17 years at a rented space belonging to the Zimbabwe International Book Fair (ZIBF).

At its peak, the playhouse averaged about 15 productions a year. Typically, three would be Rooftop Promotions (Guzha’s theatre company); five to seven would be from the local thespian community; three from the region, and another two from Europe. At the old space, they staged cutting-edge political dramas like Super Patriots and Super Morons and Members Only about self-serving politicians, examinations of race such as Strange Bedfellows, and plays about HIV/AIDS like Positive.

They were known as the busiest theatre in southern Africa, quips Guzha. It might not be mere bluff when he says at Theatre in the Park "we saw the emergence of true Zimbabwean theatre.”

Actor Zenzo Nyathi in "Tensions," written by Thabani H Moyo and directed by Memory Kumbota at Theatre in the Park.

In a country in which the sole purpose of local theatre houses was to stage Shakespeare, Ibsen and other European masters, Rooftop’s interventions were nothing short of revolutionary. “Remember how Reps Theatre and these other spaces were established so that the white minority could keep in touch with what was going on back home?” asks Guzha. There was a void, he explains. To one extreme, Zimbabwe had didactic community theatre (read: black). On the other, there was theatre that served to keep the local whites in communion with European aesthetics. Guzha wanted something that would bridge the different races.

For nationalists, and the people they appointed to run Zimbabwe’s cities and towns, culture and its ancillary facilities were never a priority. Harare, at once a place of intense intellectual cauldron, has never had a state theatre or a theatre actively supported by the government. For a long period, plays in Harare were staged in the CBD, at the old British Council and at the Anglican Cathedral.

When Guzha went into discussions with the city of Harare’s bureaucrats, the need for a new theatre was obvious: the last theatre was built in the 1960s. “A growing city needed a new space, something bigger, something in tune with a 21st thought process,” says Guzha, explaining the rationale of moving away from the old theatre in the park. “It was time to move on and [anyway] the old space hadn’t been designed for us to last that long.” Guzha chose not to go into the details of the contractual dispute with ZIBF which ended their tenure at the old venue.

Scene from the stage play "Super Patriots and Morons" at Theatre in the Park. Actors: Obrian Mudyiwenyama as Bazooka (left) and Daves Guzha as His Excellency (right)

In April of this year, the playhouse staged Super Patriots and Morons, a production about an African dictator who won’t relinquish office. When the play was first staged in 2004, it drew the ire of the thought police bureau. The Censorship Board used a colonial era law, the Censorship and Entertainment Control Act (1967), to ban the production for its overt political stance and its ready-made connections to the Zimbabwean status quo.

When Theatre in the Park staged the production this year, the thought police were outraged. According to someone from the board, it was in breach of what they were supposed to do. “The procedure is you submit your works and the board gives you a response. They made a submission but they went ahead and showed the play without a response from the board,” a member of the board was quoted in the local press.

It was the kind of controversial opening you’d expect from a space that in its old incarnation regularly staged provocative productions.

A composite of productions that have staged at the Theatre in the Park.

At its old home, Theatre in the Park was known as the busiest theatre in the region. It seems that tradition is likely to continue. Their theatre runs are only a few days long (from say Wednesday to Saturday), meaning a busy programme. Guzha says they’re still experimenting. He adds that they can extend a run depending on how well the production is doing.

Whenever I pass through the park, there always seems to be something going on at the venue. And it’s not always to do with theatre. The space is also used as a music venue (one chilly Sunday I went to watch local township jazz star Bob Nyabinde perform) and as a rehearsal space for bands. Guzha wants the venue to be used as a movie house, debating venue and conference centre. And the entrepreneur isn’t averse to hosting weddings. Not that he has to seek out newlyweds. They already come for photographs in the park.

I doubt, though, that people in Zimbabwe and the region will talk about Theatre in the Park for its glamorous weddings. It’s going to be for its theatrical productions.

Percy Zvomuya is a writer and football fan. His twitter handle is @percyzvomuya.