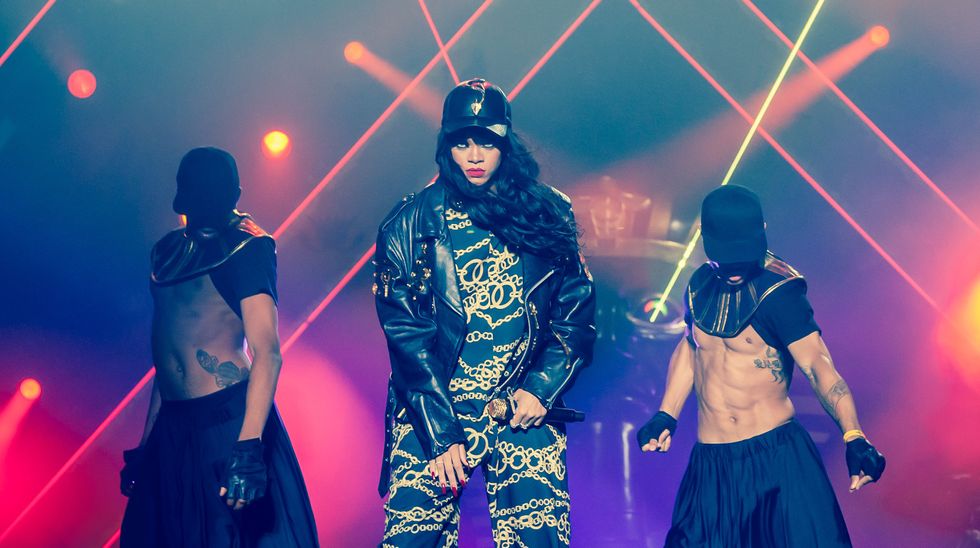 We spoke to writer and PhD student, Hamidou Anne, about the rising influence of Senegal's "No to Free Masonry and Homosexuality" group, who recently protested Rihanna's trip to the country.

A few weeks ago, we reported that a collective of 30 religious groups named "No to Free Masonry and Homosexuality" protested Rihanna's trip to Senegal, where she was supposed to meet France's President Emmanuel Macron and Senegal's President Macky Sall to promote children's education.

The group accused her of using masonic symbols and of being a member of the illuminati. Rihanna went to Senegal and participated in the conference as expected and without any incident, despite the fact that the collective threatened to protest at her arrival at the airport: "We will protest as soon as she gets out of the plane, and if need be we will protest in front of the National Assembly, the Ministry of Home Affairs, or the Presidential Palace," Cheikh Oumar Diagne the spokesperson of the collective declared in a video posted online.

These organisations—primarily Muslim—seem to come straight from a conspiracy theory parody but they are real and are pretty influential in Senegal, a country renowned for its tradition of tolerance and hospitality. They seem to be part of a marginal yet very vocal fringe of the Senegalese population; their messages and declarations are amplified by the silence of counter opinions in the public debate. As a matter of fact, during the days of the Rihanna controversy, very few journalistic or political voices arose to take position against those groups, their conservative homophobic stances and their far-fetched conspiracy theories.

However, the power of disturbance of those groups is not to be downplayed. Earlier this year after an outcry by this collective, the 26th edition of the African and Malagasy Humanist and Fraternal Meeting (Rehfram) was cancelled due to a risk of disturbance of the public order. This annual meeting of the African French-speaking masonic societies was supposed to take place on the 2nd and 3rd of February in Dakar, around the same time as Rihanna was expected to come to Senegal, which finished to convinced them that she was indeed a freemason and an illuminati.

In order to know more about those organisations, we asked a few questions to Hamidou Anne, a PhD student in political science at the Gaston Berger University of Saint-Louis, Senegal, and a columnist for the French speaking outlet Le Monde Afrique.

Can you tell us more about those groups? Where do they come from, who leads them, what are their demands?

They are often groups of imams, NGOs and organizations, with a Muslim orientation. They can also have the support of politicians of diverse importance and members of large Muslim brotherhoods. They claim to defend "good moral values," which is an umbrella term but is able to bring together people from different backgrounds. Those people become allies for a cause or against a specific event such as Rihanna's coming to Senegal, which happened recently; or to demand the censorship of a book about the life of the prophet Muhammad written by a university researcher, which happened last year.

Do these groups have other types of demands besides their opposition to Freemasonry and homosexuality?

They advocate for a morality and a set of values they believe are part of a puritan identity that the West tries to weaken. Many have suffered from their assaults. They attacked the singer Déesse Major and even caused her detention, for wearing a dress they deemed too sexy. They obtained the censorship of the book by Héla Ouardi and the cancellation of a meeting of Masonic societies in Dakar.

Freemasonry and homosexuality are easy accusations against any person who does not share the same point of view when it comes to societal issues. These are two popular themes that can bring together many individuals ranging from the political field to the religious field and youth organizations. Therefore those two terms are often brought up as tools of contestation against a given phenomenon. They can be described as the Godwin's law of these movements.

What is the level of influence of those groups in Senegal? Do they benefit from the support of the public opinion and the Senegalese political class?

Their influence is greatly exaggerated by observers, and even by some intellectuals. These groups have understood and mastered the tools of pressure this era makes available—especially the Internet and social networks. However, their influence is weak in society. The Rihanna controversy was created by a group of about 30 organizations, in a country that reckons with thousands of them.

The political class remains quite distant from the epicenter of this phenomenon because most politicians are subjected to the secular orientation of the country. Although from time to time, a circumstantial alliance can be made between a politician and these groups, for opportunistic political reasons. As it was the case with the censorship of Héla Ouardi's book, that occurred after the former Prime Minister—in the quest for notoriety after the creation of his own political party—found it useful to embark on this crusade. Besides, this alliance did not last.

"These groups are very marginal, but they should not be totally ignored."

Do they receive any support from abroad? (financial, religious or other)

I cannot affirm anything because I have no tangible information to support it. But there is indeed in some Gulf countries an ambition of expansion of Wahhabi Islam, that drives them to fund organizations, to support humanitarian NGOs, to build mosques that are, beyond hours of prayer, spaces of socialization and preaching. 95 percent of Senegalese people are Muslim and the country is located in a geographical area where rigorous Islam is gaining ground. So it would not be surprising to find links between foreign powers and those local actors.

Senegal is recognized as a tolerant and welcoming country, do you think that the presence of these groups and their possible expansion could affect this reputation and in the long term, discourage people who would like to travel there for tourism, business or conferences?

Senegal is still a tolerant, open country in which people of different faiths and beliefs coexist. These groups are very marginal, but they should not be totally ignored. The state has a role of control, surveillance and intelligence to play. But the places of socialization and construction of the citizen such as schools, organizations, and religious spaces also have a role to play if we want to prevent intolerance to prosper, which would create extremism in the long run.

How do you see these groups evolving in the future?

It is difficult to give an answer to this question because for the moment they are very small and quite diffuse in society. If the state is able to implement public policies that address young people's concerns about employment, leisure and citizenship, we can bet that these groups will remain marginal. But if we cannot reduce inequalities and integrate into the social space entire sectors of society that are excluded, then no one knows what the future holds for us. Everything is possible

Maureen Douabou is a writer and translator living in Paris.