How Europe's Racism And Misogyny Led To The Lampedusa Tragedy 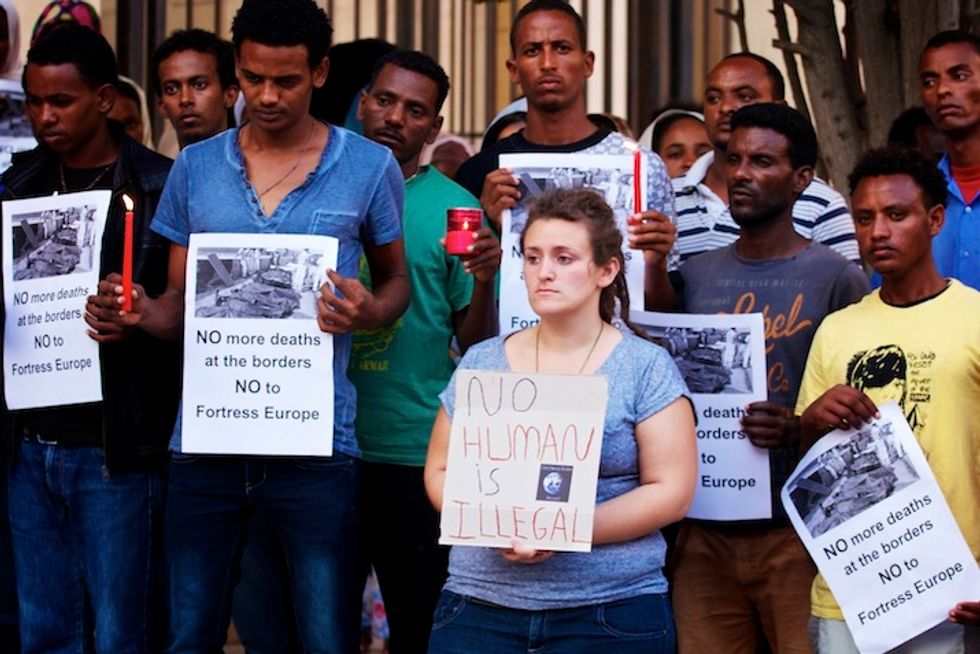 Ayana Smythe unpacks the relationship between misogyny and racism in Italy, and how these caused the recent tragedy at Lampedusa where 300 migrants drowned

In early September, Italy’s extreme-right political faction Forza Nuova staged yet another protest against Minister for Integration Cécile Kyenge on her visit to a Democratic Party festival. They left three mannequins covered in fake blood in the centre of Cervia’s town square where the festival was being held with a banner reading: "Immigration Kills."

Although the party claimed it had nothing to do with a previous incident in which Kyenge was pelted with bananas as she took the podium to speak at a rally, it did admit to the gruesome display of three corpse-like mannequins—the latest instance of escalating racist vitriol aimed at Kyenge. Kyenge has been insulted and her family threatened, but despite all the attention, there has been little coherent engagement with her political platform, the crux of which is a policy that would make it easier for children born in Italy to immigrant parents to obtain citizenship before 18 - the age standard currently enforced but not even guaranteed.

Taking an international view, it becomes clear the most disturbing trend is not the Italian government’s systemic antiblack and misogynist discourse (if you can believe that). It is that such marginalising and discriminatory rhetoric feeds into a pervasive fear of difference that is metastasising all over the West. Those who benefit are those who know how to capitalise on that hysteria: the Tea Party/Republican Party in the States with their second amendment rhetoric and call for Barack Obama’s birth certificate; the Tories in Britain with their systematic roundups and interrogations of those suspected to be “illegal” immigrants, and Forza Nuova with its bananas and bloody mannequins. It’s not only true that sex sells; racism does too. But passive disdain for Italy’s culture of casual racism will not affect change.

Beyond Calderoli’s zoological insults and MP Mario Borghezio's description of Kyenge as an “anti-Italian” “Zulu” who ought to go back where she came from, we have a political infrastructure that enables—and now almost requires—racism to conduct its mainstream politics. When yet another Italian politician has called Kyenge a prostitute it’s clear how lack of intersectional analysis has fed into a political conversation that has designated women and immigrants as its “others.”  Cécile Kyenge is Italy's first black minister, but she is also a woman (and a woman in power no less) who is the embodiment of Italy’s failed efforts to cement itself as a colonial power and to categorically denounce its “African connection” in the European context. For Italy to throw off the shackles of its fascist past (and present), it must first understand that its future lies in a coalitional politics that resists systemic violence, since it is beneficial only to those with the greatest stakes in whiteness, masculinity, heterosexuality and citizenship. Of all political figures in Italy, Kyenge realises this best, because despite the toxic rhetoric hurled her way she insists Italy is not a racist country. This is not a naïve or idealistic statement, but a defiant one rooted in political determination: current instances of racism will not deter her from her goals as a black female politician in Italy with an eye towards the country’s future.

The relationship between “la questione femminile” (the woman question) and the question of Italy's immigrants has become clear in two recent pieces of news coming out of the Peninsula: a concerted effort to stem the tide of femicide both inside and out of Italy's court system, and the recent boat tragedy occurring off the coast of Lampedusa leaving at last count 200 survivors and 194 African bodies discovered from the 500 person ship headed from Northern Africa to one of Italy's largest immigration centers. “Femicide,” a term developed by sociologist Diana Russell, refers to the killing of a woman with only her gender being the primary motivation for such violence. According to an unofficial tally in Italian and British media, more than 90 women have been killed so far in 2013 with the fact of her being a woman cited as her main offence. Most of those women and girls were murdered by husbands, boyfriends, or former partners. According to the NYT, “A United Nations report last year on violence against women in Italy called domestic abuse the ‘most pervasive form of violence’ in the country, affecting nearly 32% of women between the ages of 16 and 70, according to a 2006 survey. It also noted that more than 90% of the Italian women who were raped or abused did not report it to the police.” The reality of these statistics coupled with the fact that another female (now former) Italian politician issued a call for Kyenge to be raped shows a severe cognitive dissonance and gross indifference to the violence forced onto women's bodies, and with little surprise, given that Italian has had a culture of tolerance against such violence.

Until the early 80s, Italy had a specific law in its penal code for “crimes of honour” or passion:

Penal code article 587: “Whoever causes the death of a spouse, or of a daughter or of a sister, when he discovers an illegitimate carnal relation and in a state of rage caused by the offence to his honour or to the honour of the family, is punished with the imprisonment from three to seven years. The same penalty is requested for those who, under the same circumstances, cause the death of the person who was found having the illegitimate relation with the spouse, daughter or sister.”

Activists now claim that existing laws are “adequate” but barely enforced, and not deemed a priority by government or the Italian police force. According to the NYT, “Many of the victims had called the police to report stalking or harassment.”

The Italian coast guard has recently been accused of a “slow response” to the rescue mission of African migrants, and this would not be the first time. While the truth of this is still being investigated, Italy’s action has been swift with regards to its public relations upkeep, declaring 4 October a day of mourning for the entire nation while simultaneously imploring the UN and EU to help cover rescue costs and work towards new policies for preventing such immigration. Italy has acted equally swiftly in its courts, preparing criminal cases against the few survivors of the crash under its stringent immigration laws.

Migrant women lay at the intersection of the categories of “women” and “migrants” and as such are the most vulnerable and invisible when considering gender violence and struggles inherent within diaspora. Only six women are said to have survived this recent Lampedusa tragedy, out of over 100 women that were on board. Italy’s immigration laws that delimit access to healthcare, childcare, reproductive rights, and protection from sexual abuse means that African/migrant women are disproportionately disempowered. It’s time for a radical shift away from the normalised violence against women and immigrants in Italy, especially as political discourse continues to disintegrate and become synonymous with spectacle. People like Kyenge are the face of a new political integration of Italy's present, but the unease surrounding her reception must be dealt with. Italy must to come to terms with its illogical fear of difference, but more realistically it must recognise, on a national scale that the cold war between black, migrant, and women's bodies is one it cannot avoid. As rescue and recovery efforts continue along the coast, French PM Jean-Marc Ayrault has reportedly said “European political officials must talk, and soon.” Italy must realise that the world is watching, but we must do so in a way that is not filled with diplomatic doublespeak as we look on, standing idly by as the body count rises.