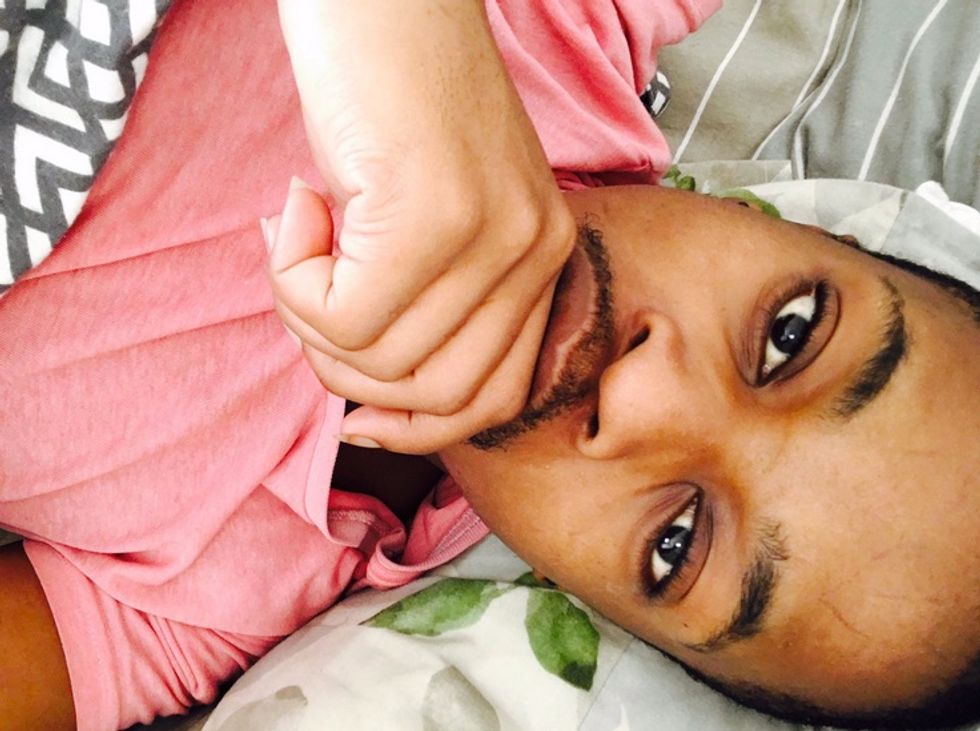 Late last week, a group of young and LGBTQI-identifying South Africans had a powerful response for one Twitter user who suggested gay men annoy him with their “convert you eyes." The dangerous stereotype sparked a full day of #IWantToConvertYouEyes tweets.

The hashtag was started by Twitter user @dean_bronson, a 28-year-old legal officer in Cape Town. Dean says he noticed a tweet from a Twitter user expressing his annoyance at gay men who “give you that look with their eyes like they want to convert you.” The original tweet was deleted by the author, but Dean was annoyed at the ignorant statement and felt a response was necessary.

Last Friday afternoon, Twitter was treated to an influx of South Africa's best "convert you eyes."

For Dean, the hashtag was about breaking down harmful stereotypes. “The perception that a queer person can ‘convert’ a heterosexual person to homosexuality is not only dangerous, but irresponsible,” he writes in an email to Okayafrica. “It reaffirms the idea to an uneducated or uninformed mind that homosexuality is a choice, which is what I took exception to. In a country still plagued by homophobia, joking about this puts LGBT+ people at further risk of violence against their person. That is unacceptable.”

It was also about taking power back as LGBT+ and gender non-conforming people. “The author reduced mere eye contact with a gay person to an act of sexual deviance. That is unacceptable. To me, the hashtag was ultimately about pushing back on that,” says Dean.

Mpumelelo Msomi, 23, of Durban, says the hashtag was a vehicle to reclaim the narrative and steer it towards queer positivity. “It's a cheeky expression against homophobes on Twitter,” Msomi tells Okayafrica.

For Janine Samuels, 25, of Johannesburg, the hashtag represented a certain spirit within the queer community. “One that takes things that are meant to belittle us and cast us in a negative light and change them into celebrations of our identities,” says Samuels. “The idea that queer people are predatory and are trying to force heterosexual people to change their orientation is a violent stereotype that puts queer people at risk because they are seen as a danger and can be attacked in ‘self defense’ by heterosexual people.” The hashtag satirises that concept, explains Samuels. “It's a form of protest that we can have fun with at the same time.”

When I asked Dean why he thinks the hashtag resonated with so many young South Africans, he explained that South Africa’s youth are at the forefront of a shift in perception of the LGBT+ community. “We truly have some brilliant thought leaders who who use social media tirelessly as a means of education. The hashtag provided an additional opportunity to do so. It's yet another chance to for us to reflect on where we are as a society, and using the hashtag as a way to challenge homophobia.”

Check out some #IWantToConvertYourEyes tweets below:

Like why you tryna front? No one's converting anyone here. Uyandifuna qha#IWantToConvertYouEyespic.twitter.com/rcVnRc4jtj

A lot of heterosexual men have turned gay because of these eyes! Watch out #IWantToConvertYouEyespic.twitter.com/Q2om0qo2Gb

Even if I look at you like this - because I will, it's only natural. It doesn't mean I #IWantToConvertYouEyespic.twitter.com/jmMYMay6Tz

#IWantToConvertYouEyes When you're pansexual and don't know who you'll convert. Come to this side, we got cookies ?? pic.twitter.com/AYBFOOyTrL

So here, innocent. As I am. #IWantToConvertYouEyespic.twitter.com/nmu2vVLCF0

Find you a man who can #IWantToConvertYouEyes

- Rather late than never. Or kanjani? pic.twitter.com/TOcCcJV6DT

BLACK QUEER TWITTER IS SO LIT WOW. Y'all tried to reduce us to a messy hash tag. Bounced back #IWantToConvertYouEyespic.twitter.com/bd4lvi1Nqn