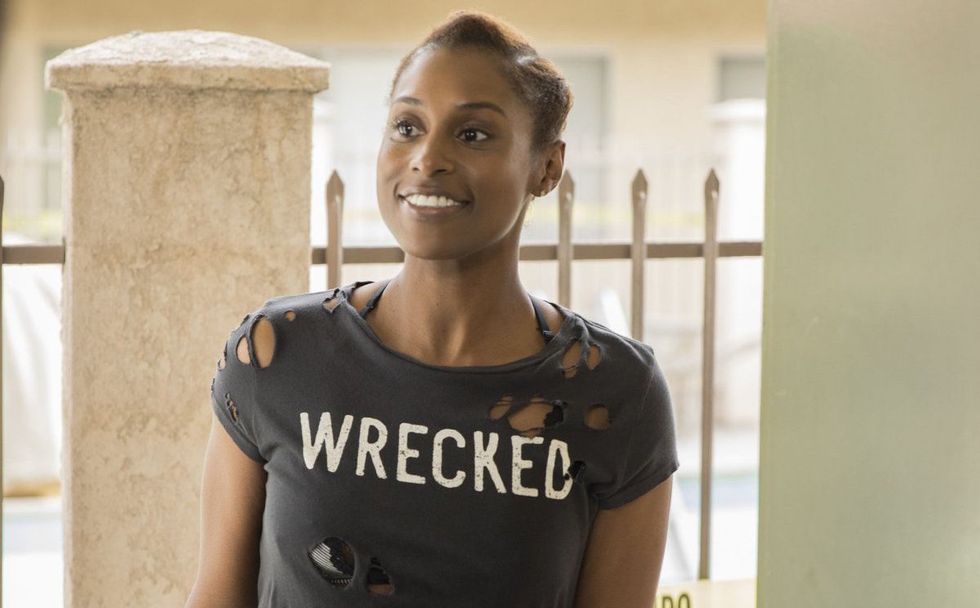 This episode of 'Insecure' shows how exciting and nerve wracking sex can be, without compromising the empowerment of exploring sexual freedom.

ICYMI, here's the recap for Episode 2.

“First of all, trying to fuck is hard,” Issa says to Molly while they barely try to assemble Molly’s white bookshelf. Flava Flav, Molly’s adorable dog, lays on the couch behind Molly’s head, like another homegirl in the conversation. His droopy eyes are as uninspired as Issa’s unsatisfied lover from the the previous night. Issa tosses a square plank on the floor right after Molly hands it to her. Try to assemble this bookshelf, for what, when Issa can’t even assemble some dick in her pussy?

I can totally relate to Issa right now. Trying to fuck is hard, especially after getting out of a long term relationship. You’re trying to find your groove, your sway, your sexy, within a “sea of brown dicks” that sometimes feels so overwhelming that it drowns you. Or, you hesitate to get your feet wet, and instead, you’re left watching the waves go by from the safety of the warm, sandy shore. And in a digital generation where you can arrange a quick fuck right beneath your fingertips, sex seems easier to navigate than it actually is. “Hella Open” demonstrates just how awkward, sticky, exciting and nerve wracking sex can be, without compromising the empowerment of exploring sexual freedom.

Lawrence, who’s been fronting for too long, is trying to play boyfriend to Tasha, even though he just wants to sleep with her. It’s evident when he tries to seduce her, and all she wants to do is talk about Shark Tank. They go to Tasha’s family barbecue as a couple, only for Lawrence to ditch her and hang out with his co workers. In all fairness, Startup Saturday did seem more fun and opportunistic than the family barbecue, but that's because Lawrence doesn't want a relationship—he, like Issa, wants to fuck around and find himself, which is actually healthier than jumping into something new. But Lawrence, wanting to be the good guy he is, made Tasha believe they had something more—which, consequently, made him the opposite of a good guy. Tasha has a great mini monologue over the phone with Lawrence, where she says “you're worse than a fuck nigga...you're a fuck nigga who thinks he's a good dude.”

“Hella Open” demonstrates just how awkward, sticky, exciting and nerve wracking sex can be, without compromising the empowerment of exploring sexual freedom.
Shoutout to Tasha for speaking up not once, but twice, in the last two episodes. Can we give her character her own storyline too? I'm so glad she and Lawrence are over. Honestly I just wanna live vicariously through every character and watch them have sex with different people. That's it!

Molly agrees to teach Issa her hoe ways, but in the process, she meets a man who reminds her of herself. He’s handsome, charming and established, which should make him a great catch, yet, Molly admits that it seems as though he’s only “checking boxes.” Issa reminds Molly that that's exactly how she was not too long ago: looking for love because it was another box in her life she wanted to fill in. Molly’s realization comes at an interesting time: she runs into a college couple who seem madly in love, but instead of feeling jealous or anxious, she realizes that she wants an organic relationship too, and doesn't want to force love with anyone. She also doesn't have to do everything alone. Remember the bookshelf she struggled making? She pays a couple of guys to build it for her, and kicks back while ignoring Hot Established Guy’s texts.

Molly should totally date her new coworker played by Lil Rel Howery. They had a funny moment in the beginning that showed a bit of their chemistry. And Molly said something about going to Chicago next week, so maybe they will hit it off.

Issa is trying to start anew now that she and Lawrence are officially over (for now?). Step one in starting anew involves painting over that horrid burned wallpaper that haunts her dining area like The Babadook. Redecoration is wonderful symbolism for moving on, especially since Issa’s ruined wallpaper is a product of her getting burned while trying to win back Lawrence. I did notice that instead of painting over her problems, she could have taken off the wallpaper first and then painted the walls. But I'm not an interior designer, just a person who pays too much attention to detail.

While Issa paints, she notices one of her neighbors lounging in the sun, none other than Nickelodeon bae Leon Thomas III! She grabs her charger and heads to his place, suggesting that maybe he left it at her house during the party (crafty!). While watching “white people do their thing” in Gossip Girl, Issa leans over and tries to kiss him, but they awkwardly bump heads. Thankfully, he gets her message, and they start making out then fucking anyway! Is it really this easy y'all? Really? I have a few spare chargers laying around in my room...

This is one of my favorite Insecure sex scenes. Although it isn't beautifully polished or bubbling with chemistry, like the other ones with Lawrence and Tasha or with Issa and Daniel, it feels real. Issa and Eddie fumble over each other, talk about changing positions, and he even asks for her consent on titty fucking her, which she respectfully declines. There's a moment when Issa is riding him, and we see her start to get the hang of it, start to find her rhythm and comfort—just like learning to ride a bike.

What makes sex enjoyable, empowering and exciting isn’t just the satisfaction of being pleased, pleasing someone else, or connecting in an intimate moment—because honestly, these things don’t always happen. Sex is inspiring because it teaches us about ourselves: it asks us to let go of our inhibitions, to be honest about our desires (and about what isn’t working) and to confront the barest parts of ourselves. Issa is the only character who has sex in this episode, but Molly and Lawrence uncover truths about their sexuality or personal dating style as well. Lawrence admits to Tasha (and himself) that he isn't looking for anything serious, and Molly learns that she just wants things to happen organically, but until then, it's okay to feel uninterested, and to pay guys to build her bookshelf.

I found “Hella Open” to be extremely empowering, and especially enjoyed that it had nothing to do with Lawrence and Issa’s relationship. Lawrence, it seems, has a fear of being alone, but with the right friends, he’s realizing that single life can be fun. Issa learned that she has her own kind of sexy, that is channeled by her awkward and resourceful nature. And Molly is literally just chillin. I could watch a couple more episodes of this, but of course, I acknowledge that for the story to move along, something more has to happen.

Speaking of—y'all peeped that Daniel is coming back?