'Insecure' S2 E6 Recap: How Will Issa, Molly and Lawrence Bounce Back From These Life Blows? 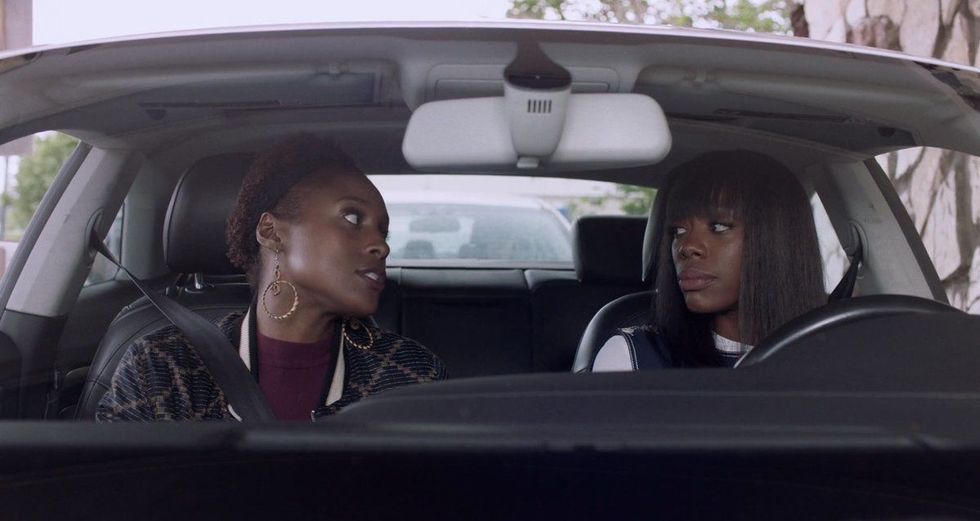 No one really wins in this episode of Insecure.

ICYMI, here’s the recap for Episode 5.

After attending a Sexplosion event with her girls, where the topic of oral sex comes up, Issa wonders if her sexual partners have been blowing her off because she doesn’t blow them. Neighbor Bae and Daniel have both left her high and dry this week, and Nico, the handsome, older man she started dating last episode, is looking for something more serious—not the casual hookup Issa feigns for.

Issa goes down on Daniel, and she’s doing a wonderful job—upon first lick, it seems as though he’s in ecstasy—but suddenly, he accidentally ejaculates on her cheek and some of the cloudy white fluid seeps into her eye.

This isn’t the first time things blew up in Issa’s face.

The worst part is Daniel’s sly comment, feigning innocence—“I didn’t ask you to give me head”—as if he was mistakenly presented a salmon dinner at a restaurant, ate it all, and blamed the waiter when the bill came and he was charged extra. Dafuq?

There’s a stigma around black women and oral sex: we’re damned if we do and damned if we don’t. For black women, how we identify with oral sex can be a journey, because we have to sift through stigmas, peer pressure and experience before finally understanding our personal feelings about it. It can take time to wrap our minds, and mouths, around the idea—especially since we are inherently sexualized, so giving head feels like an obligation placed upon us before we can even decide if we like it.

This is briefly addressed in last night’s episode “Hella Blows,” in a debate between Molly, Issa, Kelli and Tiffany. Kelli is opposed to head after encountering musty balls; Molly will go down if her partner does it first; Issa has big teeth, isn’t confident in her blowing skills and thinks men would label her as a ho and Tiffany is the Queen of Going Down—she claims that's why she’s the only one with a ring on it.

Similar to Molly, I believe in mutual oral sex, but I’ll take it one step further: giving head can be the most intimate, creative and sensual way to connect with a person. However, I believe it’s more important for women to get head, as clitoral stimulation can be our easiest and most common form of orgasm. But it took a journey to reach this point, one that involved body shaming (when I was a kid, black girls with full lips like mine were nicknamed DSL), men who wanted to get blown but were also repulsed by the idea of eating pussy, and self-reflection and self-love to determine my own standards of pleasure.

No one really wins in this episode.
In one of Insecure’s punnier episodes, the title speaks directly to our heroine's and hero’s experiences. We learn that sometimes the ideas that we think are clever, exciting and game changing aren’t always so, that perhaps we have to let go of our closest held dreams and goals to make space for something new, and that sometimes, we have to stand our ground before getting blown away by life’s fierce punches.

Molly is ignoring her mom’s calls, but is still seeing Dro. She may need time to heal from learning about her father’s infidelity and her mother’s choice to stay, but I hope she eventually speaks to her mom about it, for her own emotional and mental health. But in better news, Dro seems skilled at poppin the pussy—and he likes running bubble baths! Molly, what more can a woman want? Enjoy this, but please don’t catch feelings—just let your pussy catch the dick.

Unfortunately, Dro leaves her alone in the middle of her bubble bath, when his wife texts him because she’s locked out of their home. Reminded that she is not the priority in his life, Molly’s flame is blown out by Dro’s swift exit.

Lawrence finally pitches Woot Woot, the app he’s been sleeping on for years, to his company. His employer’s responses are politely dry: they encourage him to keep the ideas coming, but friend and coworker Aparna assures him that if they liked the app, they would’ve asked him more questions. Lawrence, oblivious to their subtle blow, persistently follows up with them. “We love having your perspective and energy here,” they coddle, “you bring a lot to the table.” Then, to add insult to injury, they ask him about his fly sneakers—twice.

I couldn’t help but think the “perspective and energy” they love so much is actually his black opinion and style. Blackness in the workplace has long been a complicated idea: we are either singled out in negative ways (once a white coworker touched my hair without asking, another time I was specifically asked to fact check ideas for racial insensitivity, which is good but also made me uncomfortable) or we are idolized for our aesthetic, as if it is our duty to bring color to a monochrome space.

Either way, Lawrence is disheartened by the company’s disinterest in Woot Woot, and tells Aparna that the idea had been so important in his life for so long, which makes it even harder to let it go. Aparna, who I always found lovely but was waiting for her come up, gently, playfully and even a bit flirtatiously, placates Lawrence’s blow: “Sometimes saying goodbye means you're making room for something better.” Their eyes lock, and for the first time since Issa (or Tasha?) I felt a genuine spark. As much as I like the idea of Lawrence and Aparna, I have to point out Lawrence has a type: he’s attracted to girls who boost his ego, especially since Issa stopped doing this after he was sitting on the yellow couch for too long.

No one really wins in this episode. They gracefully, and awkwardly, withstand the blows from life, their lovers, and work with the annoyance and persistence of a tired boxer. With only two episodes left, they have plenty more time left in the ring. We’ll see who’s the last ones standing.