For the Love of Khat 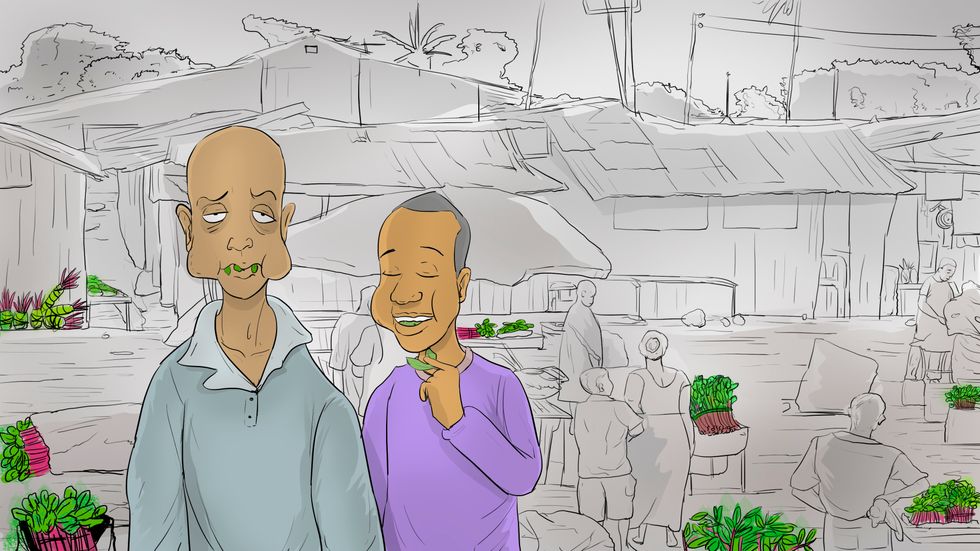 What you need to know about khat—East Africa's favorite drug.

This June a Somali-American woman named Zemzem Serajwas charged by Nashville Police with felony possession of nearly 200 pounds of khat. Her mugshot—a middle aged Tennessean in an elegant seafoam headscarf—was broadcast all over local news.

Sometimes called "tea of the Arabs," khat acts as a stimulant when chewed. The flowering plant is banned in most western countries including United States and some European countries but is popular and legally consumed in the the Horn of Africa and the Arabian peninsula. Many contend that khat use goes back thousands of years, arguing that it's a perfectly safe drug when used in moderation. Others, including many from communities that use it the most, believe that it can cause major harm.

The Nashville khat bust brought the drug momentarily into the spotlight but the reality is that it's a tradition that flies mostly under the radar in the United States. Before 1993, it could even be sold legally.

Omer Hassan settled in America in the early 1990s after fleeing a civil war that had torn his home country of Somalia apart. He, like many Somali refugees, settled in Minnesota which today has the largest Somali population in the United States.

"I used to be Khat dealer in United States and Canada when it was legal, that was my job that could generate my income, Hassan tells Okayafrica. "I would import it from Kenya and the United Kingdom and I used to be Khat consumer as well."

But Hassan would change his thinking on the drug around the same time that increased regulations came in. In 1996 Hassan traveled back to Somalia and was shocked by the extent of the khat use in his native country. "I was shocked," says Hassan, "lots of women are raising kids as single mothers because the men spend more than eight hours out chewing Khat without doing any other work. When they get back home, they no longer have the conscience to look after their kids—they are no longer able to fulfill their responsibilities as parents."

That's when Hassan changed his mind about khat and stopped handling it altogether. He now believes khat abuse to be a threat to his community and something that should be banned.

"It is true that it plays a huge role in our culture and social life," he says, "but it is a bad culture that I would not recommend to anybody."

A man in Harar, Ethiopia enjoying his khat. Photo via Wikimedia

"I began taking Khat in 2014 when I was in my late 20s" Dato Ali Guelleh tells OkayAfrica from Djibouti. This, he says, is considered late in a country where male children might begin using the drug at fifteen. "Consuming Khat here is not against the law," says Guelleh. "Every day after work we get together and chew khat publicly in groups."

In Djibouti—like in Ethiopia, Kenya, Uganda and Somalia—the annual income from Khat plays a big role in the economy of these countries where more than 50 percent of men and 15 percent of women are consumers of khat. The khat trade in Djibouti represents more than 15 percent of the country tax income every year.

An independent board of experts that advises the UK government, the Advisory Council of the Misuse of Drugs, estimates that 2,560 tonnes of khat are imported to the UK every year. In 2014, the New York Attorney General Office and the NYPD Commissioner Office announced the indictment of seventeen members of a criminal drug ring who allegedly flooded New York City as well as other parts of New York State, Massachusetts and Ohio with several tons of khat shipped from Yemen, Kenya and Ethiopia.

According to the World Health Organization, khat chewing releases stimulating chemicals structurally related to caffeine and amphetamine, which give the chewer a mild high that some say it is comparable to drinking strong coffee. But the pleasant stimulation obtained when chewing Khat induces many to abuse that drug.

"The delight of khat comes in different phases as we chew it," says Guelleh from Djibouti. "In the first hour when I have khat in my jaws, I feel excitement, and everything looks good, sitting together with people and smiling. The following stage I feel the strength, I feel more energetic than ever. The third episode is different from others, anybody chewing Khat has to be smart enough to remember that the day of entertainment is almost over, and get ready to go home.

A this stage, says Guelleh, the chewer's libido increases but—and this might be the worst part of chewing for men—despite the frisky feelings, male khat users often suffer from erectile dysfunction.

Khat chewing often plays a dominant role in celebrations, meetings, marriages, and other gatherings. Khat use even has been prevalent in the Somali military. It has been issued to soldiers in their daily rations with the intention of inhibiting their need for food and sleep, as well as increasing their aggression.

Khat seized by US customs as part of a shipment identified as tea leaves. Photo via U.S. Customs & Border Protection

But is Khat Haram?

Pro-khat users have referred to it as "Flower of Paradise," according to the author of Leaf of Allah, Ezekiel Gebissa, "khat is a tree that God loves. It is a blessed tree...it is a leaf of Allah." In some Muslim communities even if their religion does not accept drugs, many will still take khat.

"Consuming Khat is different from drinking alcohol, first of all alcohol is haram, our religion forbid alcohol but as alternative we can take khat" says Guelleh. "Khat's effects are almost similar to weed's effects. Khat is better than cigarettes because while smokers may suffer from lots of diseases including cancer, khat does not have such consequences".

But these arguments don't sway Hassan.

"The youth addicted to Khat are often mentally affected, some get involved in crimes and conflicts that are devastating our country," says Hassan. Leadership on this issue isn't going to come from Somali politicians either, who he claims often trade khat for votes. He insists, "We have to take action and defeat khat in our communities."

There is a growing consensus, says Hassan, among the Somali immigrant community in North America, who believe that the change should come through the greater education about the side-effects of khat. Chewing khat, this reasoning goes, should be stigmatized in the same way smoking cigarettes has been stigmatized elsewhere, even if there many challenges to making that happen.

"I know that whenever I raise that topic in my community, many look at me as their enemy," says Hassan. "But banning it in US was a good decision to save our community."