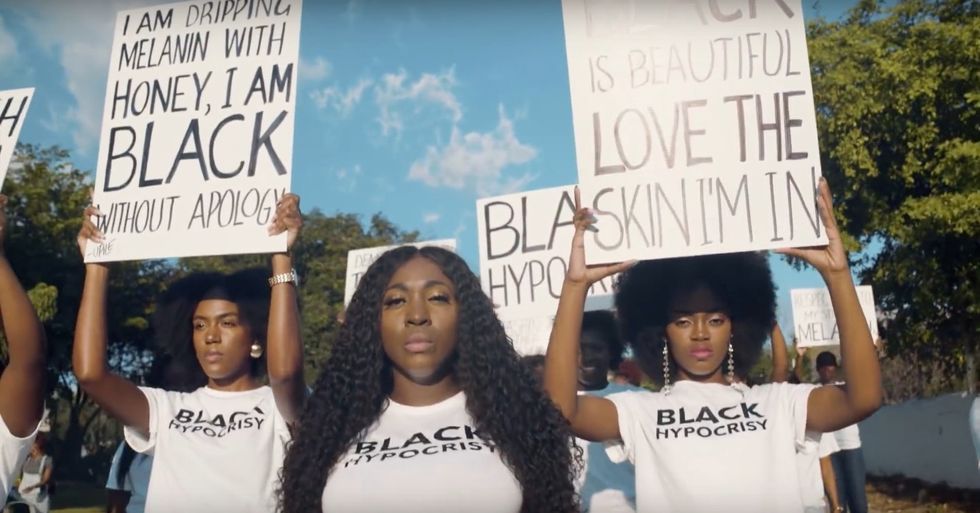 "Black girls lose confidence, because they tie the word 'ugly' to a complexion."

The artist caused an uproar on social media yesterday when she posted a picture of herself that showed her with much lighter skin. The photo caused many to believe that the singer had bleached her skin,Vybz Kartel style, but today we learn that this was Spice's rather unconventional way of announcing the new song.

With the "Black Hypocrisy" video, the singer reveals that she struggled with self-image growing up due to her complexion and urges others to be confident in their skin, no matter the shade. She decries the prevalence of anti-black beauty standards within black communities. "I am black without apology," proclaims the artist as the music video begins.

"Was told I would reach further if the color of my skin was lighter," sings Spice. "I was made to feel inferior because society said brown girls look prettier." She calls out the hypocrisy shown by those within the community who encourage skin bleaching and praise lighter skin. "I get hate from my own race, yes that's a fact, cause the same black people, they say I'm too black."

Skin bleaching is a multi-billion dollar industry, with many women around the world being taught to believe that lighter skin will lead to upward mobility and overall success. The conversation around the demand for skin bleaching products sprung up once again late last year when German-owned skincare brand Nivea put up billboards across several West African countries that promised "visibly lighter skin" to those who used their products.

No matter how odd the marketing for the song may have initially been (though we must say whoever created the "bleached" version of Spice is a photoshop mastermind), it's refreshing to see artists take on widespread societal issues such as colorism through their artistry. Watch the 'Black Hypocrisy" music video below.