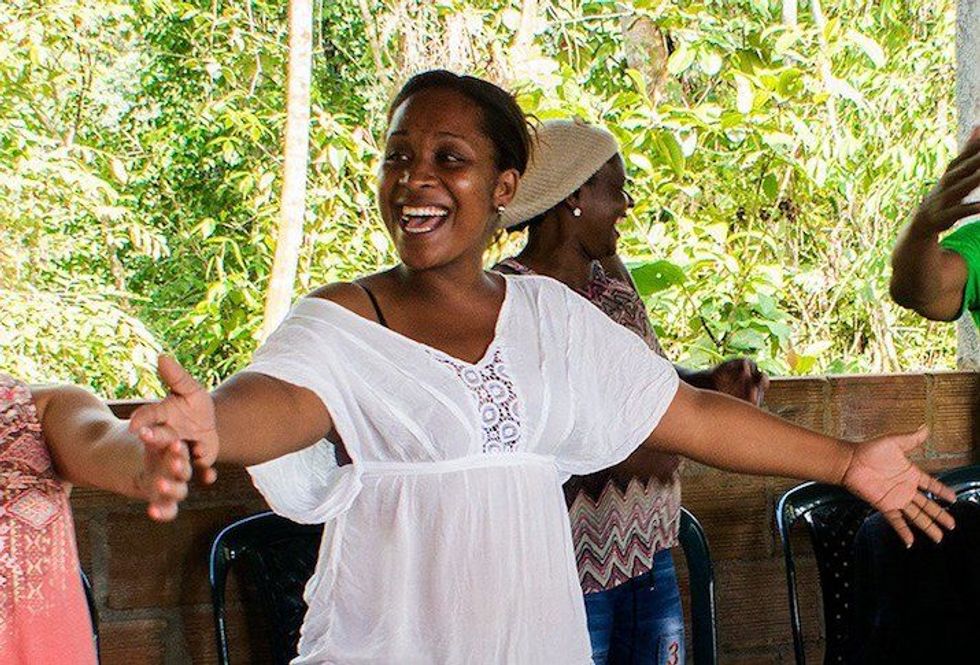 The Colombian government calls the 15 human rights leaders assassinated so far in 2017 a coincidence. But the numbers point to a crisis.

In January, at least four black community leaders were murdered in Colombia’s Pacific region, suggesting a crisis in an overlooked region of the country that is home to the majority of Afro-Colombians.

According to the Colombian news site ¡Pacifista!, at least 15 human rights activists, black or not, have been killed in 2017. According to the NGO Front Line Defenders, at least 85 activists were killed in the country last year. Yet, the Colombian government has dismissed these murders as “isolated cases”—coincidences—and has tried to focus attention on the (true) fact that violence caused by the conflict with the leftist Armed Forces of Colombia (also called FARC, for their initials in Spanish) guerrilla has all but ended since the peace agreement last year. Many community leaders nonetheless recognize a historic pattern, in which large political shifts in the country have been met with violent backlash against leftist activists, and worry that this time the black community will be targeted disproportionately.

The Afro-Colombian activists murdered this year all came from the area near the Pacific Ocean, which is the part of the country with the largest black population, and one of the areas that has suffered more from the Colombian conflict. The stories of their killings also reveal deeper problems there.

At some point between January 7 and 9, in Riosucio—a town in the western Chocó region —Moisés Mosquera Moreno was killed, allegedly by men from the Gaitanistas Self-Defenses of Colombia (or AGC), one of the scattered right-wing paramilitary groups that remain in the country. Mosquera’s father, Juan de la Cruz Mosquera Rodríguez, was also murdered by the Gaitanistas. Moisés was a member of the Community Council of the Salaquí River Basin—one of the black citizen’s organizations the Afro-Colombian community is entitled to form to reclaim ancestral lands as collective property—while Juan de la Cruz was the priest at a protestant church, and a community leader.

On January 17, Emilsen Manyoma, a community leader of Bajo Calima (a zone between Chocó and the Valle del Cauca region to its south) and a member of CONPAZ—a network of activists in regions impacted by the country’s armed conflict—was murdered alongside her husband, Joe Javier Rodallega. Their bodies were found in the coastal city of Buenaventura. Soon afterwards the FARC published a press release in which they attributed the murder to Emilsen’s brother, Marco Antonio, a former FARC member who deserted last December.

Many pamphlets by paramilitary groups have started to appear in western Colombia, threatening the lives of other human rights activists, particularly those who, like Manyoma, worked with the government’s newly established “Truth Commission,” which is meant to establish culprits in many noteworthy crimes during the Colombian conflict.

Yet, the Colombian Minister of Defense, Luis Carlos Villegas, said earlier this month that the murders of human rights activists “are not systematic” and that there are “no paramilitaries in the country.” And indeed, officially in Colombia there are no paramilitary groups. Paramilitary groups were illegally organized armed bands that were created to attack left-wing guerrillas, protect the interests of big landowners, and extinguish any attempts (peaceful or not) at land reform.

The last group to be classified as such, the Self-United (or AUC), demobilized from 2003 to 2006. But some rebel AUC leaders decided to not give up their weapons and to organize new groups that are still extorting and trafficking drugs. The government reclassified these groups as “Bacrim” (a Spanish portmanteau of “criminal bands”) in order to deny them political recognition and treat them, instead, as mere criminals. The AGC, among many others, were classified as Bacrim (which the government rebranded as “Armed Organized Groups” or GAO last year).

However, people in Chocó know all too well about paramilitaries and their permanence. Back in 1997 in Riosucio—where the Mosqueras were killed this year—the Colombian Army carried out a joint operation with the AUC called Operación Génesis in search of guerrilla collaborators. Eighty-five people were killed. Some people also report that a black farmer’s head was sawed off and used to play football in the main square. This created a mass exodus which contributed to the reported seven million internally displaced people in Colombia.

But, since the government and the FARC guerrilla started peace negotiations five years ago, people have started to come back. Those who returned, created an organization, Cavida, to work together at restoring their land and their rights to it. Many similar organizations throughout Chocó and the country have sprung up. But some fear that the recent killings are a way of scaring those who were displaced into not returning and not reclaiming their land. That is at least the position of Chocó’s newspaper Chocó 7 Días, which denounced the dangers of neo-paramilitary presence in an editorial this week.

It wouldn’t be a new tactic. Throughout Colombia’s recent history, the gains of those who have chosen to peacefully advocate for land reform have been met with disproportional violence. In the mid-1980s, during different peace negotiations, the FARC guerrilla proposed to create a political party, which they called Unión Patriótica, or UP. Members of this party were persecuted by narcos, paramilitaries and the Colombian state alike, and as many as 3,000 of its members were killed, including two of their presidential candidates.

In the early 1990s, another guerrilla group, the April 19th Movement (commonly known as M-19) reached a peace deal with the government of then President Virgilio Barco, and became a political party. At least 600 of their members, including the presidential candidate Carlos Pizarro Leongómez, were murdered. It didn’t stop then. The leftist Marcha Patriótica movement has reported that, since its foundation in 2012, 126 of their members have been murdered, mostly in Colombia’s west and southwest.

In 2010, the Colombian government started, with a painfully slow pace, to return land to those who were displaced by violent groups. Now, with the promised transition of FARC to a completely political and peaceful organization, this reparation process is expected to pick up pace. But the transition will also mean that the violent groups that remain will try to occupy the void in criminal activity (such as drug trafficking and extortion) left by FARC fighters. And as more civilians try to reclaim their lands and their lives, the right-wing reactionary groups that remain are certain to try their violence to scare people into not returning.

According to the Ombudsman Office, about 40 percent of all of Colombia’s internally displaced people come from the four Pacific regions: Chocó, Valle del Cauca, Cauca and Nariño. According to the National Statistics Department (DANE), this is also the area of the country with the largest percentage of Afro-Colombians: Chocó’s population is 82 percent black, for example, while Valle del Cauca’s is 27 percent, Cauca’s is 22 percent and Nariño’s is 19 percent.

So it is obvious that returning land to displaced Afro-Colombians and another disarmament, despite being the right choices, are likely to create an even more dangerous situation in the Pacific coast. Small farmers might again be wrongfully targeted as guerrilla aides by the illegal armed groups that remain, or they might be killed just to preserve the status quo. If the Colombian government doesn’t acknowledge this situation, black Colombians from the Pacific might be headed towards another irreparable tragedy.