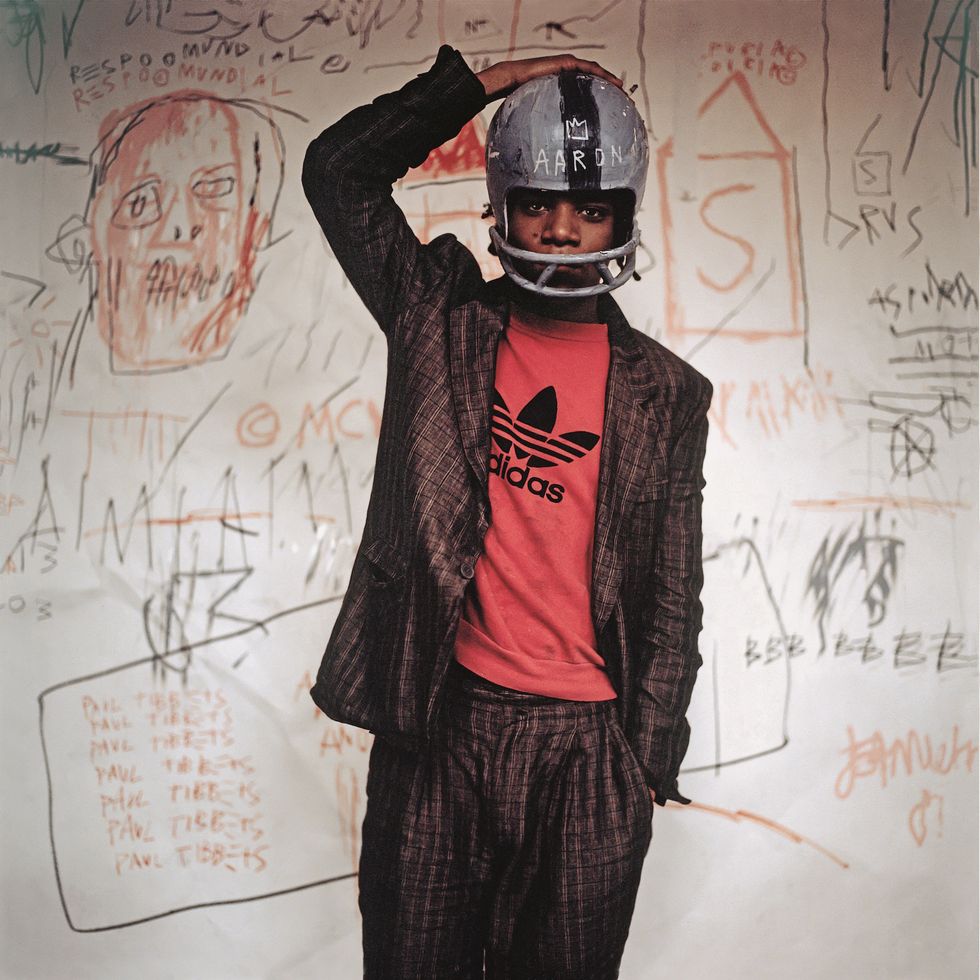 "Boom For Real" at London's Barbican Art Gallery is the first substantial overview of Basquiat's career.

Basquiat dancing to Duke Ellington. Basquiat reading from the book of Genesis. Basquiat starring in a movie. Basquiat cozied up with Andy Warhol.

These and more Basquiats are on show at "Boom For Real" at the Barbican Art Gallery in London, the first substantial survey of works by Jean-Michel Basquiat, whose 1982 painting, "Untitled," became the most expensive work by an American painter at auction when it sold for £100 million at Sotheby's in May last year. The work is the subject of its own solo exhibition at the Brooklyn Museum until March 2018, while "Boom For Real" will transfer from England to Schirn Kunsthalle gallery in Germany, where it will be on shown from February up until May.

"Boom For Real" is a most exhilarating show which works as an exhaustive overview of one man's life and also as an instructive account of unrivalled artistic genius.

Whether as playful attempt at self-importance or as calculated myth-making, Basquiat in 1981 got a friend to authenticate his notebooks by writing in it that "the book is absolutely and uniquely the product of Jean-Michel's hand," a month before his first solo exhibition in the US at the Annina Nosei Gallery. Selected pages from notebooks have been framed in glass and hung like works of equal importance as the paintings, and typically features self-composed maxims—"VICTIMS OF EMBELLISHED HISTORY;" "I FEEL LIKE A CITIZEN ITS TIME TO GO AND COME BACK A DRIFTER," wry observations, short-short stories and a list of admired cultural figures. There are also excerpts from Genesis, as well as a recording of Basquiat reading from it, in continuous play, and whose voice lends his jottings authority, ambience and poetic energy that is strongly reminiscent of Frank Ocean's own spoken word performance on "Seigfried" from his album "Blonde."

Heavily panned by the press and viewing public, the 1985 joint exhibition by Basquiat and Warhol was a commercial flop as not a single painting by the superstar pairing was sold. Three decades on and removed from the hostile anticipation and reactions of the time, the collection of 150 works made within a year of intensive productivity, are every bit as vital as other praised works. Extracts from a TV interview of the two in which both seemed genuinely chummy are on display for visitors to watch, as are a selection of works, most recognizable of which is"Arm and Hammer II," a retooling of the once popular American baking soda brand, made into a double-portrait charged with powerful symbolism which could take on different meanings—most inviting of which is as an affirmation of black genius in the portrait of Charlie Parker and the recognition of valorized white labour in the muscly arm fisting a hammer.

Basquiat's obsession with bebop and adoration of its proponents from Dizzy Gillespie, Thelonious Monk, Miles Davis and most fervently Charlie Parker make for some of his most zestful works, but also function as epigenetic records of black heritage as in "Bird On Money" (1981), "Untitled (Charlie Parker)" (1983), "Plastic Sax" (1984), "King Zulu" (1986) and "King Of The Zulus" (1984-85), a work of cluttered sophistication in which a painted image of Charlie Parker is nestled between pages of notebooks containing drawings and jottings that were pasted onto the canvas, bridging the work along sculpture and painting. What a loss it is to never see what manner of sophistication he would have develop if he'd lived into his 30s, 40s, 50s as it has in the works of Ernest Duku, the Ivorian artist whose "sculpted-paintings" are superbly complex renderings of African ideographic heritages.

Jay Z's casual brag of having a "yellow Basquiat in the kitchen corner" on 2013's "Picasso Baby" speaks to his and the monied rapper's taste for expensive art, but Basquiat's stature as a very early adopter of hip hop receives less recognition, oddly even from rappers who readily idolize and namecheck their forebears. Fab Five Freddy is known to have introduced the young painter, in the 70s, to the cutting and scratching techniques that are integral to the formulation of what became known as hip hop. In 1983, Basquiat would co-produce the still impressive "Beat Bop" with Rammellzee, who rapped along with K-Rod on the 10 minute track. Copies of the vinyl record and slipcover are displayed, their black surfaces carrying white designs by Basquiat which include his signature crown motif.

"I know so little about my career, to tell you the truth" said Basquiat in a 1985 interview. "I don't know who has what or anything like that really, or even what they paid for it most of the time."

"Basquiat: Boom For Real" is so far the most comprehensive assembly of his art but also his life and 27 years on earth, during which he reportedly made 1,000 drawings and 1,000 paintings of varying historical importance and graphic intensity—a set of achievements yet equalled by any artist, living or dead.