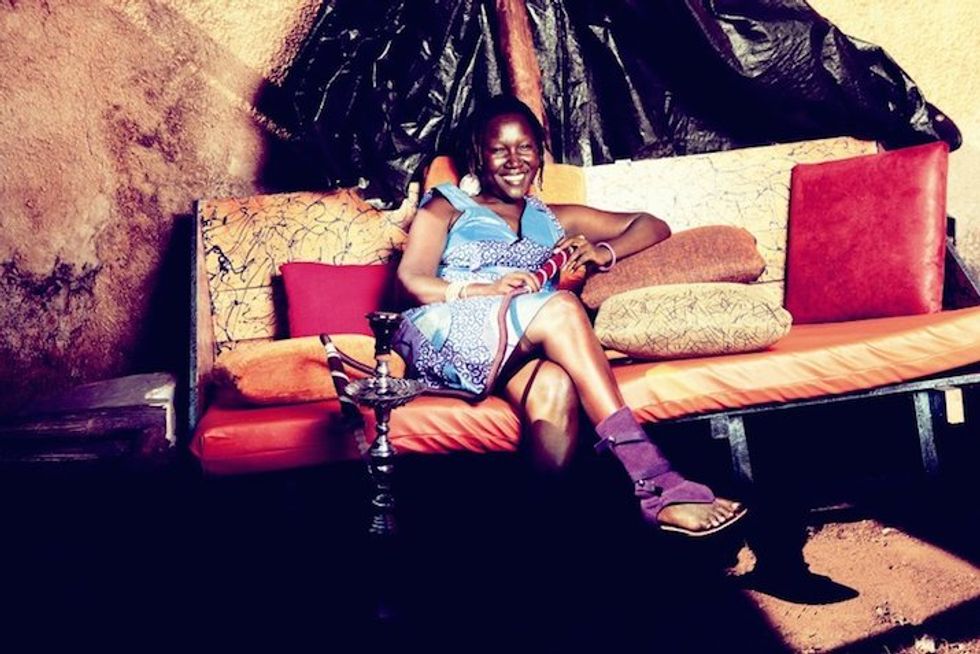 Uganda's Judith Lucy Adong explores Uganda's anti-homosexuality laws with her play 'Just Me, You and The Silence' at WorldPride in Toronto.

'Just Me, You and The Silence' is a new play by Ugandan writer/playwright Judith Lucy Adong that explores Uganda's anti-homosexuality laws by tracing the story of an ambitious politician who introduces a bill that divides his nation and family. Okayafrica contributor Anya Wassenberg attended a recent reading of the play during Toronto's WorldPride 2014. Read on for the full recap of African theatre at this year's WorldPride events in Toronto.

"As an African living in Toronto, rarely do you see nine black actors on stage," remarked Mumbi Tindyebwa, Founder/Artistic Director of Toronto's IFT Theatre as the play reading began on the first weekend of WorldPride 2014. There were knowing laughs from the packed audience. The play reading project came together after the Kenyan-raised/Canadian-based Tindyebwa approached venerable voice in Toronto's LGBTQ community Buddies in Bad Times Theatre with the script and the vision of a play reading that would include the panel discussion afterwards. "Being part of WorldPride and bringing an African context to it was important," she said.

It was also important to Tindyebwa that Binyavanga Wanaina (who had worked with her previously on a theatrical project in Toronto) – 'half Kenyan and half Ugandan' just like Tindyebwa, as she noted – and who came out publicly as gay this past April, be part of the event. He added a reading from his memoirs at a pre-show reception and his voice to the panel discussion later on.

Just Me, You and The Silence, the latest play from Ugandan playwright, filmmaker and activist Judith Lucy Adong, came to life at the reading with the help of nine actors and guitarist Kobèna Aquaa Harrison. Set in Uganda, it follows an ambitious politician and his social-climbing wife in their crusade to enact a harsh anti-gay bill of the type that the Ugandan government has recently made into law. The politician's family life – including the bad son, a musician, and the apparently dutiful son who is secretly gay himself – intersects and then collides outright with his ambitions.

"At the forefront of my work is satire," Adong noted in her remarks. She uses satire and an absurdist sense of humor to highlight the cynical political maneuvering by elected officials, including the Minister for Culture and Appropriate Morals and the Christian church that puts the LGBTQ community in its crosshairs. Tragically some of the more absurd elements have truth to them, like the way gays are described and demonized in government propaganda as predatory pedophiles financed by white society to destroy the African male. One of the more hilarious scenes features the "Gay Recruitment Corps" and their quest to "steal" Ugandan youth from their parents and God. "Gayism," as it's called in the play, "isn't African." "This is the humiliation of the African male," one character proclaims.

The "good" son's journey from dutiful appearances at his father's political rallies to his public coming out parallels the father's push to see the law enacted, and things quickly spin out of control. Crowds get violent and the play offers no pat answers to the current situation. The satire also brilliantly spotlights the intersection that the LGBTQ community straddles between the personal, the public and the political, made all the more poignant by the actual state of affairs in Uganda.

In the play, pressure from the West (the EU in particular) only fuels the anti-gay fervor. During the panel discussion, Adong paraphrased a comment from her Facebook feed in noting that the West turns a blind eye to all sorts of atrocities and oppression – like the anti-miniskirt law that has also recently been enacted in Uganda – but jumps on board selectively, such as when the queer community is involved. In fact, morality laws and anti-gay laws are only part of the story when it comes to human rights oppression.

The panel discussion was directed by d'bi young, a Jamaican-Canadian dub poet and monodramatist, who posed one particular question about storytelling. "We lost the tradition of storytelling," Adong said. "I’m looking for African stories. At school one of my conference papers was looking at redirecting African stories in film." She mentioned the importance of telling stories within a cultural context – an example being the popularity of American films dubbed over by Ugandan veejays. "We need to focus on how we treat each other. Africa is a communal society."

"The biggest challenge as a Ugandan artist practicing in Uganda is self-censorship," Adong said. It's a challenge she faces head on, making her reputation by tackling the subjects no one wants to touch. An earlier play, Silent Voices, deals with the northern Ugandan war. "We hear about Kony but what about the government involvement in the conflict?" she asks. That play came about by happenstance. "I never planned to write any of them ahead of time," she said. After hearing the stories of child soldiers, she became passionate about the idea of writing a play about the war. "I dropped out of degree program because I was obsessed with the play," she laughs. Particularly poignant for her was the moment when she asked one of the former child soldiers how he could forgive his former oppressors and he said, "Because the teachers told me I would go to hell if I don’t, I forgive them."

"I'm coming from the country [where] it’s considered to be the worst place to be gay," Adong noted. In July 2011, she found herself the only African playwright at the Royal Court Theatre International Playwrights’ Residency in the U.K., where she developed the script for You, Me and the Silence. She also used research from Freedom and Roam Uganda, an organization working with Uganda's LGBTQ community.

When it came to this most recent play, even her students in Uganda questioned why she was "promoting this dangerous way of life." "If I was to produce this play in Uganda – how would I do it?" she asks herself. She reported consulting her lawyer, who told her, "I am your lawyer for everything except this play," explaining that his wife would divorce him if he was seen to promote gays. While the play has been read at various events throughout North America and in Europe, a Ugandan premiere seems a distant probability.