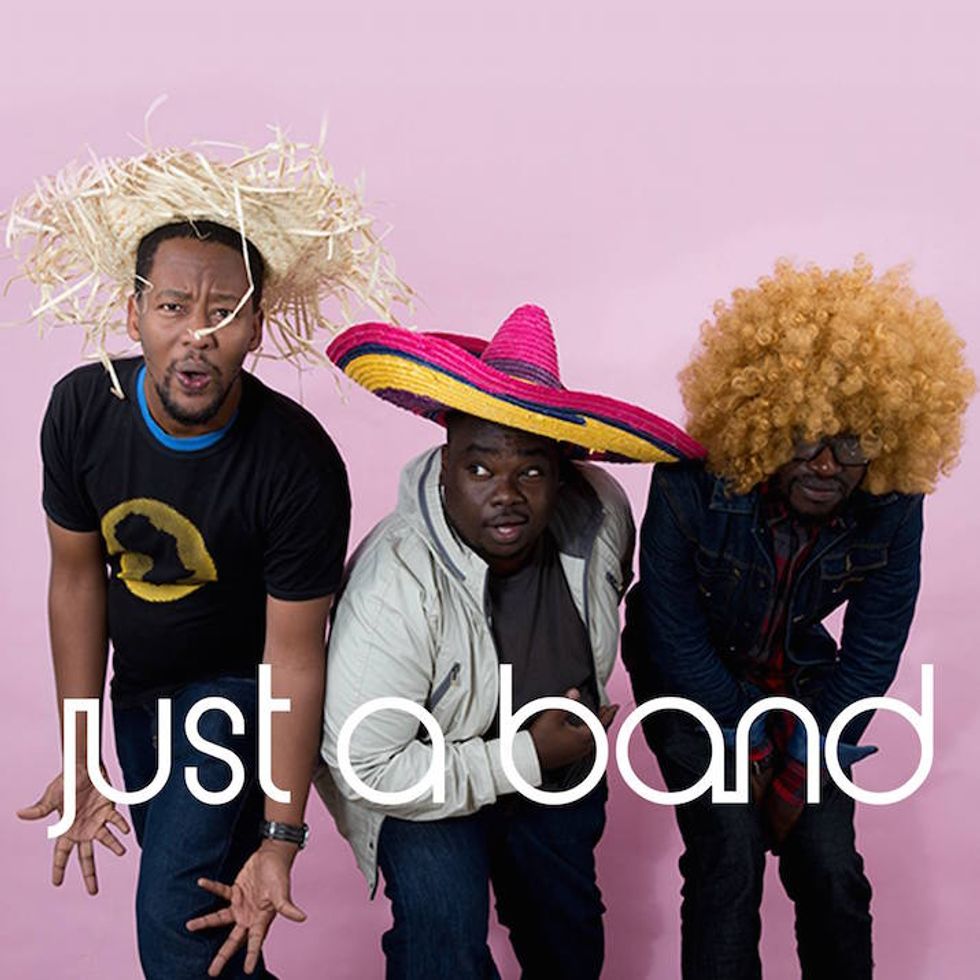 As Just A Band goes on hiatus, one of their biggest fans reviews the new book from the Kenyan three-piece.

In 2014, I signed up to be in the crowdsourced music video for the song "Probably For Lovers" by Kenya’s Just A Band. I was thrilled at the chance to appear in my favorite band’s video.

A friend and I recorded our bit during an afternoon of riding bumper cars at a local amusement park, as we loudly sang the song. Since the park was almost empty, we even convinced the attendants at the park to play the song in their speakers.

The resulting video was a mesh of different people in different places from all over the world enjoying their favourite music. With the video appearance, I felt that I had finally earned my stripes as a true Just a Band fan and become a part of their mythology.

Just A Book, released on March 11th, continues this myth-making process. The book takes me inside the band that I love, the band that I’ve been listening to and jamming to, the band that has inspired me to break the mould and imagine myself to be more than I ever thought possible. The book is an invitation into the world of Just A Band and affirms its readers as part of their band family. And as it turns out, it’s also a parting gift: This month, Just A Band announced that they’re taking a hiatus from music for two years to focus on their solo projects.

With the audacious name, Just A Band, the group forged their way into the Kenyan music scene. They came with a new style—a fusion of modern electronic sounds and afro beats—and a DIY approach to making music videos. They used technology and the internet to develop their sound and videos, creating memorable and artistic characters.

The band was formed in the early 2000s when the members were still in university. Originally made up of Bill “Blinky” Sellanga, Jim Chuchu and Daniel Muli, the group added a fourth member, Mbithi Masya, before eventually going back to three members when Chuchu exited. Through the years, the quartet embarked on a musical journey that took them in previously unexplored directions in Kenyan music.

They were a band determined to build a unique identity. They were eccentric and eclectic, innovative and intelligent and made being different cool and this is what connected them to many of their fans. Just A Band opened up new possibilities for artists who wished to explore music and art in non-conventional ways especially in a digital space which has changed the way Africans create and consume art.

This coupled with their strong social and political commentary as seen in their songs "Dunia Ina Mambo" and "Matatizo," gave us a band which was a lot more than just music but which also provided a soundtrack to the lives and experiences of young people in Kenya.

I came into the world of Just A Band later than most. I first properly heard of them in 2010 when they released their Makmende-themed video for their song "Ha-He" which created a buzz on Twitter. As young Kenyans, we had recently become active on Twitter and the timing was perfect for the first Kenyan viral video. For days we talked about Makmende and created memes reminiscing about our childhoods playing Makmende games.

This popularity gave them their first taste of global recognition with many media houses like CNN, running interviews on them and the video. Later, I enjoyed their Boxing Day Special, a collection of songs performed and released as a gift to their fans on Boxing Day of 2011. And when they released their 3rd album, Sorry For The Delay, in October 2012, their first single, "Probably For Lovers," was on heavy rotation and I loved the melancholic tone of the song.

But it wasn’t until a year or so after, when my friends and I decided to celebrate my birthday by going to their concert that it finally clicked. The performance was electrifying and the energy of the audience was intense. We, the audience, were part of the performance in the way that only a crowd that knows a band intimately can be. I was amazed. Later, a friend gave me their album Sorry For The Delay as a birthday gift, and I spent the next morning dancing to it with my little niece.

Loving an artist who has been around for a while and already has a dedicated fan base is the type of love that moves backwards. You start off from the point where you first heard them and then you go back in time and it feels like you are peeling off layers of history, discovering places and things that already happened. You watch their videos and interviews and sometimes remember a point where your history connected with theirs. You wish you had paid attention then, and let in their awesomeness in your life earlier.

Just A Book continues this, documenting their journey through various stages as they morphed into who they are today. As a fan who was late to the game, this book fills in the gaps that I missed. It tells me the stories behind my favorite songs, the process of making my favorite videos and gives me a glimpse of how the individuals in the band used their different skills and perspectives to create their art. And as with their music, it also tells me the story of the world through their eyes.

Inside Just A Book. Image courtesy of Just A Band.

Edited by Mukami Kuria, the book is part prose, part images and first person narratives by the members of the band. The different band-members’ voices come through: Dan’s passion for animation comes out when he talks about the challenges of creating “Boflo,” the character in “Hey” with little training or resources. Bill is a bossy perfectionist in the way he clearly articulates everything he intended and planned to do with the band. And we can see that Mbithi is the guy who holds the band together; the one who connects the ideas and makes sure they’re executed as envisioned.

After a preface by Mukami which talks about her experience documenting Just A Band, there is an essay by Jepchumba, which explores how the band interacted with the creative and digital space in Kenya that they found themselves in and how in turn their art has influenced this landscape as it changed and grew.

The constructive social, economic, cultural, and political environment would push the band to develop its own culture online. The band is known for creating online personas, inspiring viral social media trends and memes, and inspiring a new generation of Kenyan creatives to participate online.

Peppered throughout the book are photos of the band and their collaborators, a tribute to those who travelled with them on this journey. The book offers a kaleidoscope of experiences from when they were just three young guys trying to make the kind of music they like to hear to what it is now: not just a band anymore, but something bigger. Just A Band has become a cultural movement—a community made up of fans and the artists themselves.

Aisha Ali Haji is a Kenyan writer working in advertising and radio. She's currently in University of Nairobi for a BA in Journalism. Follow her on Twitter @bintiM.