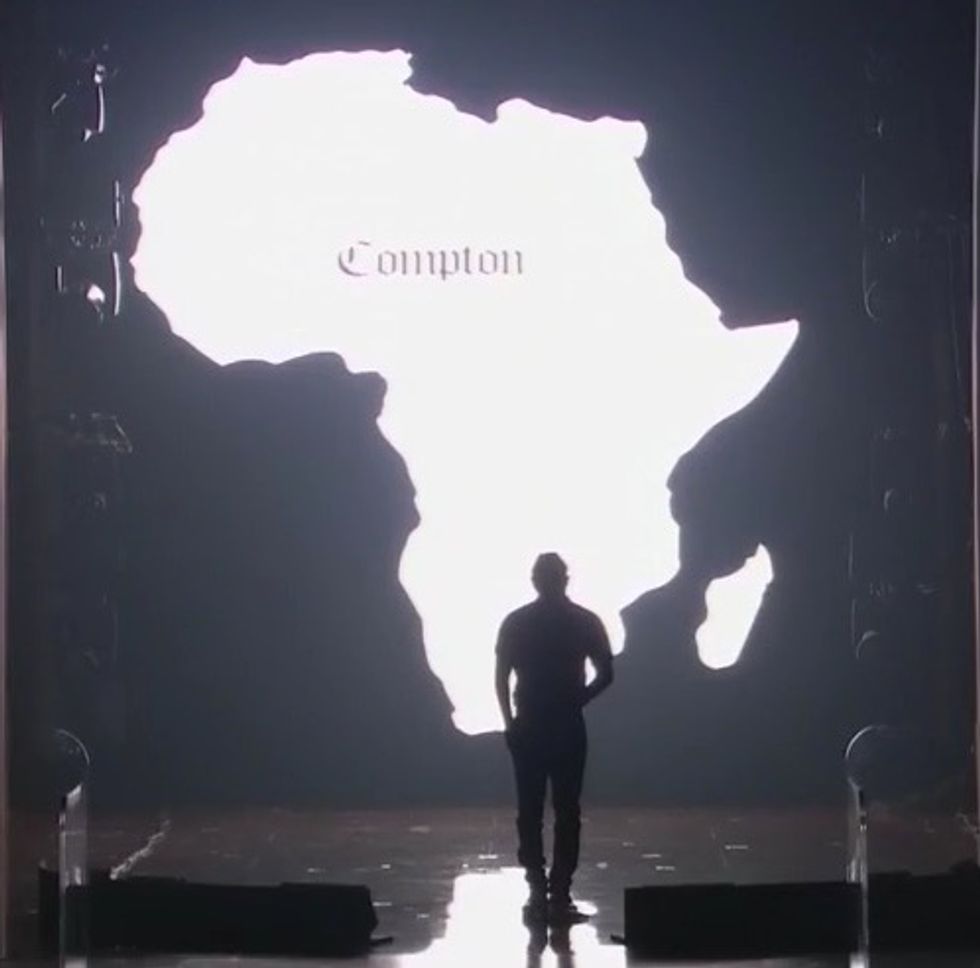 Watch the Kendrick Lamar Africa inspired Grammy set of To Pimp A Butterfly tracks "The Blacker The Berry" and "Alright."

It might not be a stretch to call Kendrick Lamar’s 2016 Grammys performance one of the most powerful in live television history. After sweeping the rap categories at tonight’s awards and being introduced by Don Cheadle, the Compton rapper and his dancers stepped out on stage in chains from inside a prison set before launching into “The Blacker The Berry.” “I’m African-American. I’m African” Kendrick raps on the To Pimp A Butterfly track.

Soon the performers were unchained, covered in glow-in-the-dark paint and surrounded by fire. Then suddenly, the performance transitioned into a nod to the continent as Kendrick began performing his Rap Song of the Year, “Alright," which the rapper recently revealed was inspired by a trip to South Africa.

All of this of course led up to the grand finale, an impassioned unveiling of a new track that ended with Lamar in front of a map of the African continent with the word “Compton” written on it.

The end result was nothing short of magnificent. Watch the full performance below.

Speaking with Billboard before the show, Grammy producer Ken Ehrlich spoke on the “provocative” nature of the performance. "Kendrick came to us and said that we live in a time where these issues confront us every day and that it’s important that they be given a public forum, and he would like to use his x number of minutes to create a great performance that is consistent with his this year. It is overtly political and it is overtly provocative, and I think if nothing else it’s going to give people something to think about and talk about." Check out some reactions of the Kendrick Lamar Compton Africa moment from Twitter below.

Kendrick is what Kanye would have been if the Kardashians didn't get him.#GRAMMYs#KingKendrick

Kendrick just made me jump from my couch!! You betta let them know you African ✊? pic.twitter.com/TKGxAZ9Ie5

Kendrick put a map of Africa on the #GRAMMYs with the words "Compton" on it. pic.twitter.com/shTfT3Ibcv

Kendrick was electric. But didn't get the love deserved inside Staples. Was kinda quiet in here. My sis + I went wild tho. #Compton#GRAMMYs — Ava DuVernay (@AVAETC) February 16, 2016

How is anyone talking about anything other than kendrick's performance.

Look at the fear The dismay The disapproval The saltiness during Kendrick's performance.#BlackHistoryMonthpic.twitter.com/Vg0ngsIoM0 — Jay (@Jayveri) February 16, 2016

Cheer for Kendrick's performance & learn from it, BE YOU, DO YOU

I hope white ppl who were touched by kendrick's show + feel like a hero for being touched by it now take that feeling + cause actual change — mitski (@mitskileaks) February 16, 2016