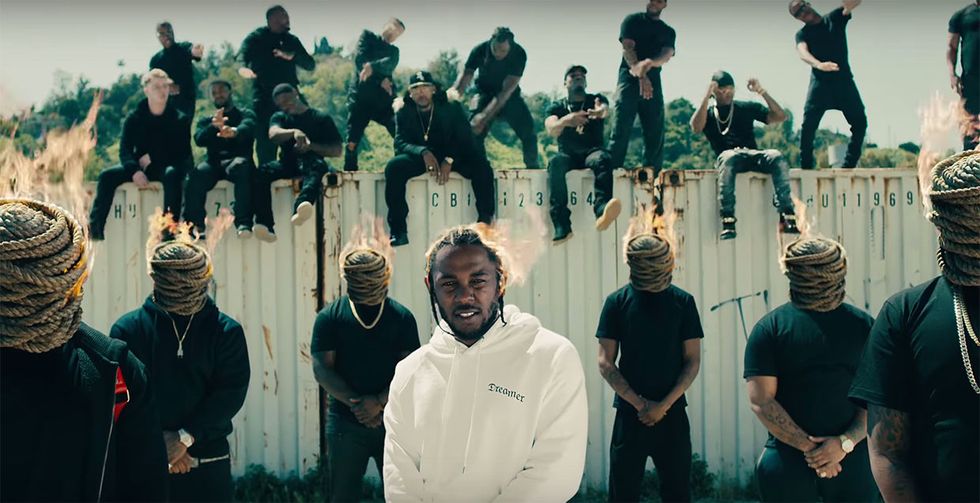 On Kendrick Lamar’s new video "Humble" and the beauty of knowing you’re poppin' but recognizing you’re not perfect.

Kendrick Lamar lied to us.

In his new song “The Heart Part 4,” he said we had until April 7th to get our shit together. That's not a lot of time, but at least he gave a heads up. Then he dropped the "Humble" video last week, on March 30th, which, is anything but humble. It’s amazing, audacious as ever, and reminded me that... my shit still ain't together.

All jokes aside, “Humble” is a delightful video, a wonderful moment in pop culture and social media and a great display of unapologetic blackness.

Time stopped for a day or two, as people paused to magnify in this music video’s greatness. My timeline was flooded with stills of the video: Kendrick in a sea of bald, brown bobbing heads, Kendrick’s crown of braids lit aflame, Kendrick at the last supper.

These images resembled works of art, reminding me of the sensual audacity of Kehinde Wiley’s paintings of black men, or the majestic quality of John Edmond’s observations of men in du rags, in the nude and in the hood.

I love when pop culture and art references one another, even unknowingly or unintentionally; when black people are celebrated and blackness is shown in a glorious, pristine light, because that's what it is, and the more media that portrays that, the better.

I find that these moments when we can stop and marvel at black artists’ contributions for a day, a weekend, a week—like Beyoncé with “Formation," and now Kendrick with “Humble”—we’re not only marveling in the artist we love, we’re marveling in our own blackness, in each other.

What makes “Formation” and “Humble” resonate deeply with black people is the way it juxtaposes black excellence and authenticity with black struggle and the black come up. In both visuals, we are stunned by the capacity of our wonder, and the gravity of our community’s issues, such as racism, police brutality and more. The result: iconic, moving visuals that speak volumes.

“Humble” follows some traditional rap video aesthetics—like an aerial shot of Kendrick laying on a bed of money while shooting more into the air—but it also takes some chances, which makes the visuals resonate poetically. The bald bobble head scene is visually striking as well as symbolically thoughtful: it reminds me of togetherness, of the struggle between individuality and community (he is the only one with braids in this shot) and of the ways society views black people as a monolith. There's several ways to interpret this shot, which makes it more interesting to rewatch.

Money and individuality aren't the only ways Kendrick showcases his pride and success. Kendrick’s reference to Grey Poupon is one of my favorite and less obvious moments in the video. The scene where he sits in the backseat of a car and spreads the mustard on a slice of bread is a remake of old school Grey Poupon ads:

The condiment is very popular in rap music, as it’s a fun word to rhyme with and an edible symbol of class and status. In this song, Kendrick aligns himself with Grey Poupon (fine mustard), Evian (boujee water) and TED Talks (the media non profit that organizes impeccable talks by intellectuals of all fields), showing us that his music is as influential and exquisite as these popular luxuries.

Of course, “Humble” isn't perfect, and realistically nothing ever is. I sent it to my homegirls, who all became “obsessed” with the video, which made me happy. How could they not be? But I was also interested in whether or not they picked up on his lyrics about women, photoshop and stretch marks. Kendrick says:

“I'm so fuckin' sick and tired of the Photoshop

Show me somethin' natural like afro on Richard Pryor

Show me somethin' natural like ass with some stretch marks”

These lyrics have good intent behind them. Simply put, Kendrick is tired of seeing fake images of women and he wants us to embrace our stretch marks, our acne, our natural hair and other parts of our beauty that aren't traditionally deemed beautiful. However, the problem with it is that women don't want to be told by men how we should look, how we should present ourselves, how we should exhibit and define our beauty. And we’re especially criticized if we like photoshop, or if we don't want stretch marks. We should make those decisions about our body, no one else.

Throughout rap history, men are either telling us to shake our asses or to stop wearing make up. Living up to so many conflicting standards of beauty is exhausting. The problem arises when we are told that one is better or worse than the other, or when we are defined by these actions—i.e. if you twerk you're a hoe, if you wear makeup you're insecure. And there's nothing wrong with whatever we decide to do with ourselves, especially if we feel empowered by it.

Kendrick believes in natural beauty, which is great, but shouldn't all beauty be considered worthy, whether a woman manipulates her looks or not? The decision of beauty is up to the woman. Kendrick wants us to be humble about beauty, but we should also be humble about what beauty is.

However, I'm glad those lyrics were included. They opened up the continuing conversation on the

complex relationship our society has with beauty, and the many levels they fall within: from white beauty standards to black beauty standards to the way men think women should look. Society still has work to do when it comes to its relationship with us, black women, and the different reactions people had from the “Humble” lyrics about women’s beauty is another launching pad that feeds this conversation.

Overall, “Humble” inspires us to revel in our power as black people, while simultaneously reflecting on the things we still need to graciously work at, to converse on and to recognize about ourselves. True humility leads to growth... but there also ain't nothing wrong with knowing you're the shit.