Op-Ed: Why Is the Kenyan Music Industry So Behind? 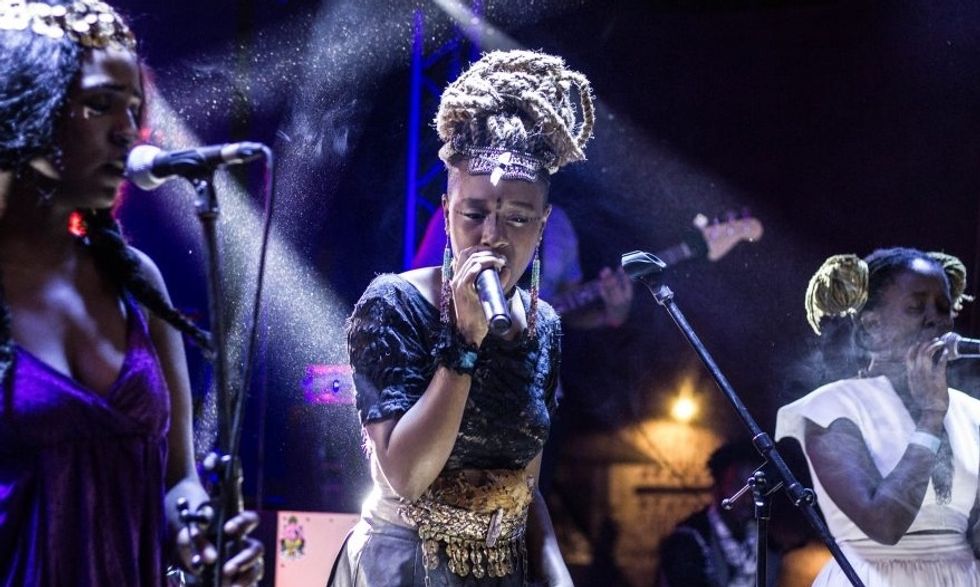 "In Kenya we have yet to have that kind of financial and moral support as a country," Fena Gitu.

It's a fundamental question, one that many discerning music-obsessed individuals have asked four rounds deep at 2AM on a throbbing Nairobi dance floor: why is Kenyan music so behind?

Not in the musical sense, that boat holds no water. Kenyan artists, while they definitely have a different sound, can go punch for punch for any other African industry—I'll happily meet any naysayers outside. The problem is that they're not getting paid for it. So what lies at the root of this problem, why do the two other major 'hub' countries in Africa, that of South Africa and Nigeria, outstrip Kenya's industry by such a wide margin? A 2016 report from Price Waterhouse Cooper shows the two former industries trending upwards, growing, outside of population size. The Kenyan growth is visually dampened.

Unfortunately, this helps that ugly word 'underdevelopment' rear its ugly head. There's a fundamental disconnect in the 254; one at the infrastructural level, a support level, a level of basic respect between a country and its artists. The first and obvious aspect of this is that the Kenyan government just flatly doesn't give a damn about the development of arts in the country. They may say otherwise, but actions and follow through always speak louder than words.

For instance, take the shit show surrounding the Music Copyright Society of Kenya. It's the body overseeing the royalties from airplay for artists in Kenya. They've been embroiled in a court battle since the early stages of 2018 over their alleged 'eating' (stealing) funds. Victor Seii, a staple of the Kenyan music scene since the early 1990s and his days with Five Alive, seconded these suspicions about the practices of the regulatory bodies, "MCSK was just totally eating nearly all the money and not informing the artists! It happened that way for years." Such practices resulted in a systematic underpaying of Kenyan artists, and it's awful hard to invest in yourself when you don't have the cash to do it.

The issue with Kenyan music growing influence is somewhat of a catch-22. The very body that's supposed to handover the money doesn't do so, and to deepen the rift, the government simply doesn't support the industry. The money doesn't ever to seem to wind up in the hands of the right people to further the sector. For starters, it is extremely rare that musicians get their seat at the decision making table. Instead things are seemingly passed down from on high, without much thought to if they will actually help.

One prominent case in recent months was that of Nairobi DJs being arrested and shaken down for 'noise violations,' the sound waves spewing forth from amplifiers beyond ill-defined 30 meter bubbles. I was witness to one of these; Suraj, a prominent DJ playing in the hippest of Nairobi gin-joints being frog-marched out by a series of helmet-sporting heavies. No one told him a thing, other than monies were now magically due.

That raises that other oh-so ugly word: corruption. As awkward of notions as such terminology raises, it must be raised. As Tim Adeka, a producer and the manager for renowned Nairobi rapper Stella Mwangi posed: "I'm convinced that the aspiration that should propel music artistes, producers, visual artistes and the administration to international standards has been crushed by the high levels of corruption in Kenya altogether."

The million dollar question is where does the money go in the middle? If one is to look at the budget, at the infrastructure, the support channels for Kenyan artists, things look quite on the up-and-up on paper. "Corruption is crippling," said DJ Coco-Em, one of the Nairobi house's brightest rising figures, "our entertainment industry receives a chunk of the national budget every year but artists can hardly get a hold of the money."

An astute reader may wonder, so why don't those in Kenya's music scene just rely on gigs and their own hustle? That gets to another ugly aspect of the problem: the country doesn't support their own. This isn't just a problem of the small time gigging weekend warrior musician, as Tetu Shani, one of the Nairobi scene's leading indie figures explains, "Even our superstars are not making money that is proportional to their hard work and influence. In Nigeria, major corporations aren't hesitant to back an artist. Here they are."

Kenyan artists routinely go through that cycle, they need airplay to get a gig, but won't get the cash from that airplay, when the gig finally comes around, there simply aren't asses in seats. Unfortunately most of this blame comes back full circle and winds up at the feet of the Kenyan government once again, and has done so for decades. "It's a historical thing," says Seii, "from the mid-70s through the '90s there was a definite stifling of local music, local content. It wasn't overt, but suddenly guys couldn't get funding or support. Major record labels were here, CBS, EMI, but they closed in that period. The government started focusing on science, not the arts."

Slowly but surely, those in the musical sphere were squeezed out and de-prioritized. Trina Mungai, a Nairobi singer slowly moving her way up the rungs of the musical ladder, has seen this first hand, "The government are stuck in the traditional mindset that artistry is just an expression of self and that's all. we are treated kind of like paint on the street walls… our career's don't scream out valedictorian and future president, so musicians are not taken seriously enough to even give us room to make our country and people better. Our voice is smashed by politics and power. We've been categorized as the hobby-career package and not taken as a legitimate business by our own government."

This is an unfortunate turn, especially viewed against the rest of Africa and other nations who turn their music industries into multi-billion-earning juggernauts, the sounds of which are currently taking over the rotations of dance floors of Europe, Asia, and the US. In many of these cases, there was basic support from the state, a bit of investment and just a touch of dialogue. That's the real core of the issue: it wouldn't take much for Kenya to leapfrog into higher international influence.

Still, there's a pervasive feeling among those in the music scene that the ship is turning, albeit slowly. It's just being done in the country's own style, coming from the outside and trying to subvert the norm. The very lack of definition and identity of Kenyan music, the eclectic vibes and collaboration, are taking those key steps towards in that long-haul game of industry catch-up. There's something extremely delightfully subversive about the industry in Kenya. Everyone's still on their grind.

Fena Gitu, a force in Kenyan hip-hop for nearly a decade now, hit the nail as close to the head as anyone, "In Kenya we have yet to have that kind of financial and moral support as a country, but times are changing and we're slowly but surely catching up."

Sooner or later, the music in Kenya is going to be putting everyone else on notice. At this point, it's simply a matter of time.