6 Kenyan Rock Bands You Need In Your Life 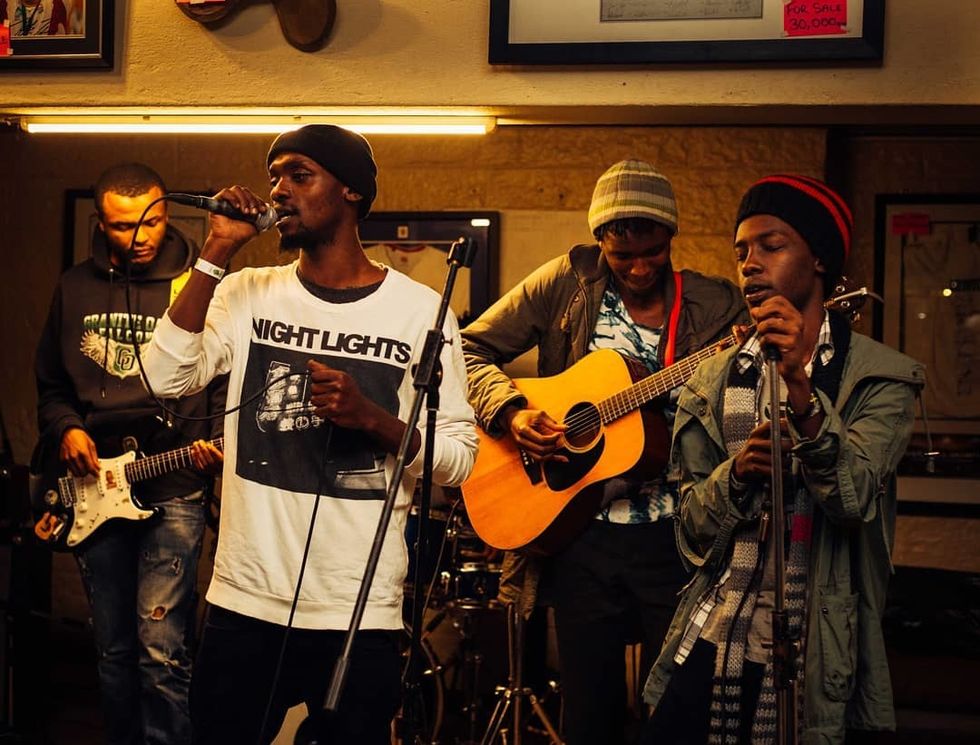 You know what the best aspect of the Nairobi's musical identity is? It can't be boxed into some artistic corner; no one can point to any singular sound and define it as the definitive style of the 'Green City.' Such is the case with the Nairobi rock scene, one that has an utterly devoted following; no filler or bullshit. Nairobi rock has long had its own little niche, carving out an identity in a city that has a particular soft spot for such unique voices. That's Nairobi rock in a nutshell, enough with the superlatives; this is no frills rock music: take it or leave it. Without further adieu, here are the 6 Kenyan rock acts that you will rapidly develop an obsessive addiction to.

How can one define Dove Slimme? Well in the simplest possible terms, they're just a dope little rock band with slight punk-pop stylings. This is a band that's firmly planted as a Nairobi act, they're sound is frenetic in energy, with the lyrics of lead singer Jillz careening around the songs with unstoppable energy. Lead guitarist Gregory Limbe does some great work riding the rails and weaving in the riffs. Behind it all is a tight rhythm section that helps hold down Dove Slimme and make them one of the most entertaining rock bands in Kenya.

There's just a lot to like about 20 More Days. These guys been a consistent funky rock band—sometimes straight-up, sometimes with more indie vibes. Versatility in the rock sphere is probably what best sums them up, it just seems that there isn't an angle to the rock game that they can't swing, knocking out ballads and bangers in both KiSwahili and English. Within recent years they've been a mainstay on the rock charts in Kenya. Make sure you listen to tracks like "Chepchumba" and "Maisha/About the Money" to get a taste of what 20 More Days is about.

Simply put, RIsh is a badass. Her music is pure hard rock. Her songs are instantly recognized for their ultra-intense lyrics and heavy-handed rhythm section. Her track "The Hate Song" probably best exemplifies this, with its delight in being extra and absolutely brutal lyrical take downs. Some of tracks are rock decadence at their best and as such she's an absolute staple of the Nairobi rock scene, and can be found at almost any legit Kenyan rock festival.

When Crystal Axis took a hiatus, they were sorely missed by the assorted rock-heads in Nairobi. Thankfully, they're now back and with a vengeance, seemingly determined to make up for lost time. A lot of rock bands just 'come back' often trotting out their former glory and repeatedly claiming their relevance. Crystal Axis couldn't have split further from this. Their 2017 track "Leopold" is a blistering take down of historical evils, and it seemingly came of left field. Crystal Axis has that capability; to absolutely melt your face with harsh lyrics, then back it up further with some of the intricate of instrumental workings found in East African rock.

I must admit, I have a soft spot for what Simply Tomas does. Theirs is a delightfully cheeky throw back to those great late 90s rock bands, and they have the witty jams to prove it. Lead singer Tomas is one of the best at pulling together gorgeous little melodies and the band always turns them around with a lovely twist into some absolutely lovely grooves. There's no better example of what Simply Tomas has been capable of the last several years than their oldie-but-goodie "Tafadhali."

Has any rock band in Nairobi managed to hang around and remain relevant longer than Murfy's Flaw? Truly that's a dubious proposition at best. This band has been in the upper echelons of Nairobi rock for over a decade. They just keep on making incredibly theatrical music that always seems to tell the entirety of a story over the course of a single track. Murfy's Flaw can, and has done it all, from the East African rock festival circuit all the way to stripped down acoustic sets. They're so consistently good, someone will probably write a 'Best Rock Acts in East Africa' in 2032, and there they'll be, still in the mix for the region's best rock band.