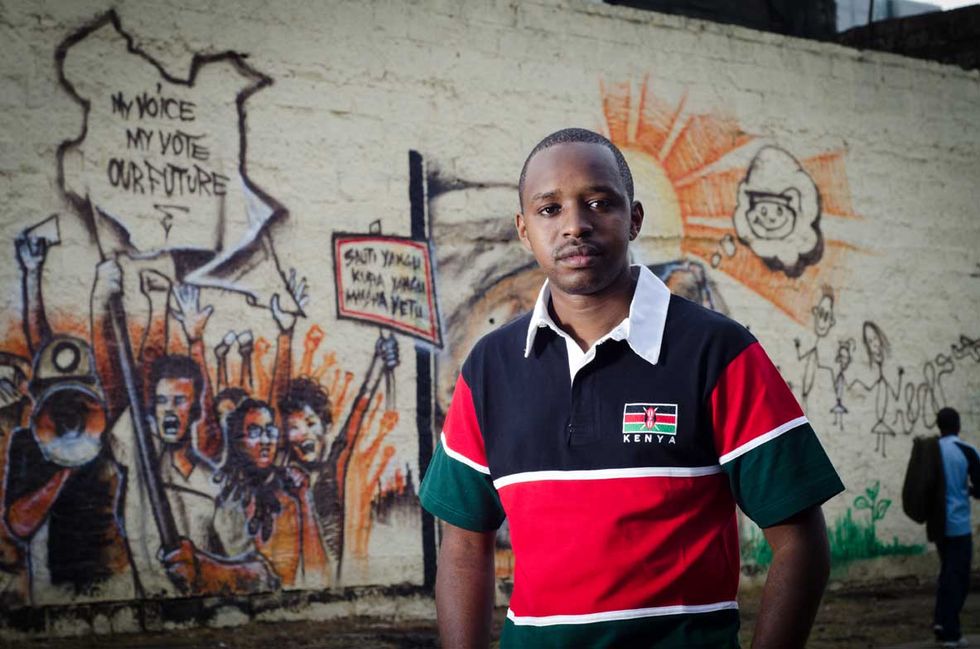 When I call up Boniface Mwangi for this interview, he sounds weary, “There is no one else?” he asks. Mwangi has had a rough start to 2016 having lost one of his closest friends, fellow activist and photographer James Quest to a hit and run.

Mwangi, or Boni, as his close friends call him, started his career as photojournalist while still in his early 20s. When the post-election violence broke out in Kenya in 2007, he found himself on the frontlines documenting what would become a turning point in Kenya’s political landscape. The pictures—which consequently earned him a CNN Africa Journalist of the Year award in 2008—had a profound impact on how he viewed his country Kenya and his role in it.

Now a TED Senior Fellow, Mwangi’s face has become synonymous with social protest in Kenya, his unorthodox methods perhaps adding to his notoriety. From smearing pigs blood on live pigs outside Kenya’s parliament buildings to protesting excessive salary increments by MPs (MPs salaries in Kenya are among the highest in the world), to working with local graffiti artists to paint powerful social justice messages on Nairobi’s streets. He may be a polarising figure but his views—much like those of the child in Hans Christian Andersen’s Emperor’s New Clothes—are hard to ignore.

Naliaka Wafula Imende for Okayafrica: What do you think are the big issues facing Kenyans in 2016?

Boniface: If you look at Kenyan society at this particular time, all we talk about is corruption. The headlines are always about corruption in politics, in the judiciary and everyday life. That’s our biggest cancer right now. If we do not address it, we are doomed as a country. The government has admitted that we lose 60 percent of the National Budget through corruption, but who is stealing this money? So our big issue for 2016 and beyond is corruption and it must be addressed.

If you could change one thing today in Kenya, what would it be?

I would ensure that there is rule of law, that we all follow and respect the law, that there is no rich or poor, fat or skinny before the law, that if you break the law you face the consequences. The reason why Kenya is extremely corrupt is because of impunity. No one should be above the law, including the president.

One of the main problems we face is that the rich break the law and they get away with it. Our jails are full of poor people and petty offenders, but the rich criminals walk scot-free and continue to work in government, politics and business. They literally run this country. We talk about a ‘bandit economy’ because Kenya is indeed run by bandits. Those bandits are not in jail, those bandits are in power.

Do you think that Kenyans are now moving towards a reality of being more aware of their rights as citizens?

You’ve talked a lot about the middle-class in your tweets urging them to wake up and do more. Are they part of the solution or part of the problem?

At the moment, the middle-class are a part of the problem because they have the power to change this country. They are in the biggest tax bracket, are influential and educated. They have access to the corridors of power but only use that access for self gain. Their apathy is bad. We leave the poor to vote, we leave the poor to fight and the poor make desperate decisions and give us tribal leaders. We the middle-class can use our influence, money and power to change this country but we’re not using it.

Is the press really free right now? What do you think is happening?

There is a lot of self-censorship by Kenyan media. They are afraid of the government because the government is the biggest advertiser in this country. What do you do if they are the biggest advertiser? It’s a case of ‘he who pays the piper calls the tune’. The other people who could be the free press, the bloggers, are being arrested on very frivolous grounds. We may not have any journalist in jail but they are working in a very hostile environment. Do we have press freedom? We do, but it is under attack.

You took part in the My Dress My Choice protest that saw over 100 Kenyan women take to the streets of Nairobi. How do you feel that women’s rights are being represented?

I think women should be protesting because you have women representatives who don’t represent you. I think that that gender rule (Two thirds of the seats in Kenya's parliament or senate should be occupied by women according to a proposed bill that has faced numerous delays.) should be applied. When the president does his appointments he forgets that gender rule and there are no complaints from the women reps. However, I’ll say that the girls today know their rights more than the Kenyans today. The women in Kenya, especially the ones in urban areas know their rights and understand how to bring attention to those rights.

You recently won the 2016 Freedom of Expression Award. How do you feel about that?

It’s exciting but there is more to life than just winning awards. I think if I could live in a country that everyone was an activist I’d be very happy because all of us would be fighting for the same thing and my children’s future would be secure. Freedom is important and as Kenyan citizens we have a very progressive constitution that’s why we don’t have any activists in jail or journalists in jail. We need to defend those rights because people died for us to be free as a country. People died for us to get multi-party democracy. People died for this new constitution. It’s actually our responsibility and our due to defend it.

Last year, you and fellow activist Irungu Houghton were involved in #OccupyPlayground to protest land grabbing of Lang’ata Primary School land in Nairobi. Police ended up firing tear gas at children, actions that drew the ire of the public. Would you mind just giving us a background of how the Occupy Playground movement started?

A friend of mine, Irungu Houghton, approached me about the issue. We spoke to the school, stakeholders as well as the parents. The idea was to actually just go and access the playground on that particular day and that’s what the kids were trying to do. They went to school, it was break time and they were all going to their playground but they ended up getting beaten up and having teargas thrown at them.

From that bold action from those students, 24 schools have done the same thing and reclaimed back grabbed land. Over 5,000 schools across the country have applied for title deeds for their land and the president gave a directive that all schools should be issued with title deeds. While we understand the concerns of the people who said that they are opposed to what we did, we also need look at the fruits of what happened. I don’t think we should be blamed for the violence that happened that particular day. The police had no right to be in a school playground, unless they are there to protect.

Kenyan schoolchildren at the #OccupyPlayground protest. Courtesy of Boniface Mwangi

You recently stood in support of Elani, the music group that took on the Music Copyright Society of Kenya over unpaid royalties. What are your feelings about the Kenyan music industry in terms of growth and expression?

The Kenyan music industry is broke and very poor. I work with the artists here and sometimes we have to pay their rent for them or lend them money to pay their bills because music doesn’t pay enough. Kenyans consume a lot more western and West African music than local music. Some of the radio stations and TV stations that actually play the music of the artists do not pay royalties. Kenyans are not buying the music and Kenyans are not attending shows. They (the artists) are struggling and I feel where they are coming from.

What do you think is the role of Kenyan artists when it comes to social justice? Are they there yet?

They are not there yet. There is a minority–Juliani, Sarabi, TearDrops, we have Ukoo Flani who were kings of that and Kalamashaka who used to sing about social justice. We have these local musicians who just sing for fame and money and are not into advancing our society. I think we should learn from people like Harry Belafonte, Miriam Makeba and even Lucky Dube who sang about the struggles they faced. It was surprising to see local musicians complaining about not getting royalties because finally they woke up to the reality. If you don’t fight for your right no one is going to do that for you. That’s why I was cheering them.

You recently held a vigil for the Fallen KDF soldiers at Uhuru Park and Kenyans feel like there is no end in sight with this fight with Al Shabaab. Some politicians are calling for a complete withdrawal of the troops from Somalia. What’s your take on that?

I think Kenyans need to understand what we’re doing in Somalia. We don’t know. It’s been said that we’re selling charcoal there, rotating sugar smugglers and that being in Somalia is not making Kenya safe. The reasons for going to Somalia were all wrong and that means that we don’t have to have people dying in Somalia if they are not winning the war. We’re not fighting a conventional military war we are fighting a guerrilla insurgency ‘hit and run’ type of war.

Occupying Somalia is not going to make Kenya safe. If we want to make Kenya safe we can always come back to our country and secure our borders. We can use that money to pay police officers, stop taking bribes and allowing terrorists to come into the country.

You were a photographer first before you became an activist and are currently working on a book. Tell us about that.

I’m working on a book based on my work from the last ten years, from 2005 to 2015. The book is called BoomTwaff. Boom Twaff, the direction I took in photographing my subjects and the music I grew up listening to.

Will it be as jarring as the photos you took of post-election violence in 2007?

Actually it’s a struggle right now. I’ve shot happy moments. I’ve done nude photography. I’ve done celebrity photography. I’ve photographed presidents and prime ministers and I’m conflicted on what I’m going to show in the book. The book should give you courage and hope and inspiration. I need to balance those two. I still am an artist and I still worry, do I have to censor my work? If you look at my work, I have hundreds and thousands of images and they range from hot models to dead charred bodies.

Naliaka Wafula Imende is a writer, journalist and culture enthusiast based in Nairobi. Follow her on Tumblr and Twitter at @nalikali.