This Kenyan Street Artist Is A Global Star 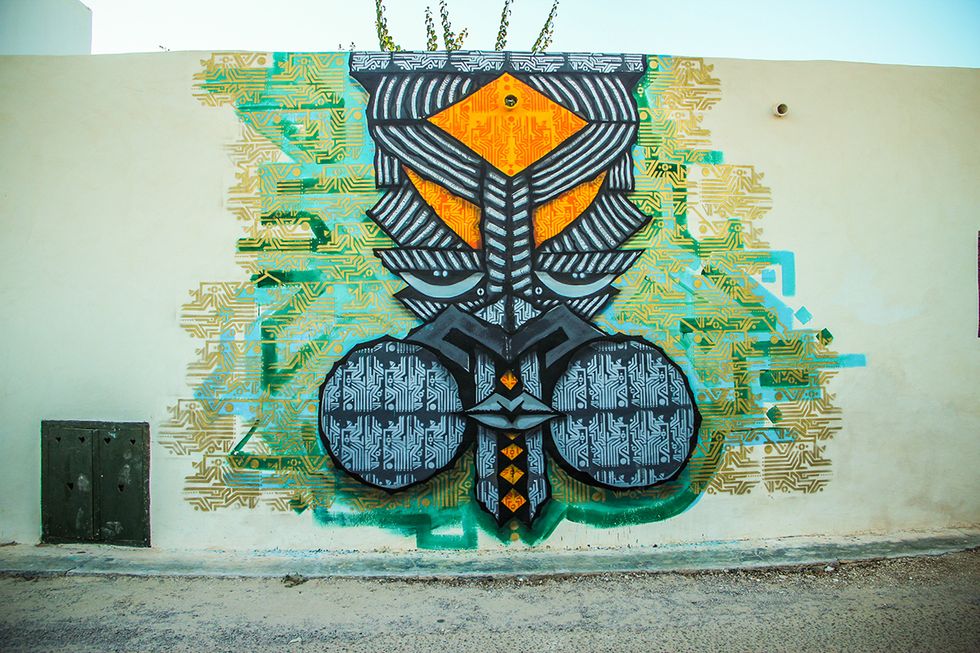 The above conversation is taking place at Maringo Estate in Eastlands Nairobi. Graffiti artists WiseTwo and Smoki La are working on a wall when two kids fresh from school approach to ask what they are doing. The children in Marish (as the locals call Maringo) are not shy, they ask quick-fire questions in Sheng-laced Kiswahili and shorten their names as if to add to the aesthetic of living in one of Nairobi's oldest estates.

WiseTwo, who grew up on the other side of town, is here thanks to Smoki—their collaborative effort is the fruit of a close to ten-year friendship borne of spray cans and bare walls. For WiseTwo, an opportunity to paint a wall in Nairobi's Eastlands is one he cannot afford to pass up.

The graffiti art community in Nairobi is small but growing, everyone knows each other and any time one of the artists gets commissioned to paint a huge mural they call up a few others to help out. On this day WiseTwo and Smoki are painting for the fun of it. There is no client brief so they are free to exercise their artistic freedom.

“This is where Smoki La lives so it is much easier to get a wall. He knows the area, he knows the neighbourhood, he knows all the people here. It's away from the CBD which is cool because there is less pressure of being arrested or asked many questions."

Mash, a rapper born and raised in Maringo and a longtime friend of Smoki, provides water and an old ladder. He hopes to use the wall in his new video and keeps watch as the artists get to work.

WiseTwo began painting at the age of seven. He has a degree in International Relations but is more likely to be found painting African masks at international street art festivals than writing reports for an NGO.

And for good reason. His art has seen him collect fans and followers from across the world and the opportunity to spray walls from Brooklyn to Vancouver. His most recent show was at the Gallery Itenarrance in Paris last year.

“It was my first solo show. I like that whole idea of expressing myself coming from a different continent. Being able to work at the gallery opened the horizon and expanded the artistic level of what I can produce," he says.

Born and raised in Nairobi, Wise Two's work is influenced by African culture with a nod to Egyptian hieroglyphs and his Indian heritage, which he expresses through his pattern work. Together with other Kenyan graffiti artists he has been involved in social justice street art campaigns such as The Kibera Peace Train during the run-up to the elections in 2013.

Despite his apparent success, WiseTwo feels that African street artists are still very underrepresented when it comes to international street art festivals and media.

“There is a lot that's happening in not only South Africa, but also in Tunisia and right here in Nairobi. There is not much coverage of it but something cool is happening in the African continent."

As he and Smoki La add the finishing touches to their piece, one of the kids hanging around asks for an empty can, he shakes it and walks away smiling.

WiseTwo, Resilience of the Soul mural, Rochester, New York. Courtesy of the artist.

Naliaka Wafula Imende is a writer, journalist and culture enthusiast based in Nairobi. Follow her writing at binti.me and Twitter at @nalikali.
From Your Site Articles
Popular