Khartoum's Budding Art Scene Is Ready for a Global Audience 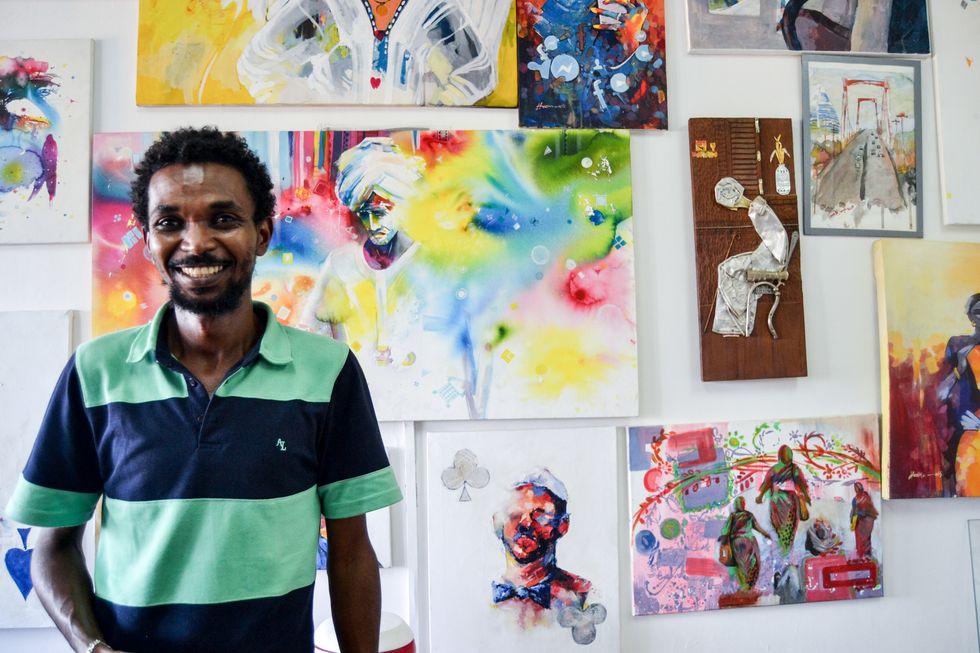 Tucked away in a single room in an office building in downtown Khartoum, Sudan, the Khaish Studio is an experiment. The small room is an ambitious undertaking by three young Sudanese painters and sculptors—Hazim Alhussen, Elhassn Elmontesr and Galal Yousif. While already well known in their home country, the artists are hoping Khaish Studio will help them get to the next level—where they can make art they believe in and get paid to do it.

It’s a simple enough idea—can this small, dedicated room give the three artists and other collaborators the mental space that’s needed to take Sudanese art to the next level? But in a country where their art isn’t necessarily appreciated, it’s a major gamble that the artists don’t take lightly.

“This is the thing we do,” Yousif tells me. “You try other things but we couldn’t find ourselves in these things. We are better at this [art] and so there is no choice.”

For Yousif and many young artists in Khartoum, it feels like they've reached a crisis point—a moment in which many feel compelled to take a chance on their dreams rather than satisfy other people’s demands or expectations on them.

The result of this risk taking is a small, but vibrant visual arts scene in one of Africa’s friendliest but least visited capitals. Under the soaring temperatures—literal and political—artists like Yousif are taking their visual art out of the art schools and into the world, using traditional formats like galleries and shows, but also making a name for themselves on social media. The latter has been especially integral to making art in Sudan pay, a key factor in attracting more fresh talent. “This is the time for change,” Yousif continues. “If you are young, you have the power and if you can’t do it now, you won’t do it later.”

Considering that Sudan is one of the most ethnically diverse countries in the world, it’s no surprise that the visual art produced in Khartoum alone reflects a variety of styles, influences and techniques. At Khaish, Yousif is inspired by everyday scenes in the city by painting abstract cityscapes in vibrant colors that capture the energy of the Sudanese people. Hazim leans towards striking mixed media compositions, merging an eye for realistic detail with fascinating use of everyday materials like food wrappers. Elhassin also leans towards watercolors, featuring stunning depictions of Sudan’s people.

Of these motley influences, Yusuf Yassin, the curator and manager at Mojo Art Gallery in the Khartoum 2 district and perhaps the best-known contemporary gallery in the city argues, “Sudan is perhaps the only truly African and truly Arab country in the world, and because of that the art is a little bit of everything.”

In a short 30 minute walk through of the uniquely designed and custom made space he shows me everything, from Arabic calligraphy, to startling watercolors, to a striking series by Waleed Warigi done entirely of items found in his kitchen (coffee, food coloring and spice pastes).

Mojo, Yassin tells me, doesn’t simply accept any artist who tries to submit their work, but instead is trying to reflect best from the diversity on offer in Sudan. Women are a big part of this diversity, and the gallery probably has within its walls the largest collection of art produced by Sudanese women in the world.

Yet across the board, few of the pieces deal directly with the ideas that Sudan is best known for outside its borders—conflict, especially—although artists like Samir Osman do deal with the internal turmoil that faces anyone who has lived through such uncertainty. Sartre would perhaps be disappointed to find that in Sudan, art is mostly produced for art’s sake—to please the artist or their underwriter.

Like most Sudanese people, Yassin came late to contemporary art but precisely because of his own experience, believes strongly that the country has major potential to grow as a key source and market for visual art especially. “The thing is the artists have to educate the people,” he insists, by way of solutions. “Artists have to educate people about what art is, and then push with the small things like getting it into the education ecosystem.”

But knowledge isn’t the only obstacle to building a market in Sudan. Art is expensive, especially if the artist is to make a reasonable return on the time and energy that is spent on producing more elaborate pieces. $300 may seem like a little money to pay for one of the more remarkable pieces hanging in Mojo, but for ordinary Sudanese people, it’s a small fortune. Yassin advises the artists he works with at Mojo to maintain two price points. “There’s a gap between the public and the artists,” he says. “I tell them to produce something for Sudanese people, and something else for outsiders. Some of it should be accessible here.”

Still, while the ecosystem in which art is produced and distributed is still in its infancy in Khartoum, key parts are already in place. Exhibitions and showcases are held in a variety of spaces, including the two main galleries in the city—Mojo and the Rashid Diab Centre—as well as in hotels and the department of fine arts at the University of Khartoum. Further, much like many other African cities, European cultural centers like the Alliance Francaise and the British Council have stepped in to provide spaces at heavily subsidized prices.

For the artists, these European spaces can be a double-edged sword, especially where the curators at these institutions display a bias for art that embraces Eurocentric themes or reflects European ideals on what constitutes “good” art. “Sometimes you fight with the established galleries because they don’t understand what counts as good art and what is not good,” Yousif says. This was part of the impetus that led to the formation of Khaish and why the studio has invested significant amounts of time in painting public murals in various neighborhoods in the city—to bring the art of Sudan to the market on the terms set out by the Sudanese artists themselves.

It’s an ongoing project that Yousif and Yassin both hope will make art a more viable undertaking for more young artists. In the meantime, the great hope for most is to show their work abroad and to establish markets there. The Khaish artists hope for a show in a neighboring African country where they can connect with other artists, while Yassin advises all the artists he works with to cultivate external markets, on social media especially. “It’s a business. Whoever is good and gets outside is set for life,” he insists, even while urging such artists to retain links in Sudan.

Yousif offers young artists somewhat less pragmatic but perhaps more inspirational advice: “If you want to be an artist, you can be an artist. Simple. Try it before you say you can’t.”

Nanjala Nyabola is a writer and political analyst currently based in Nairobi, Kenya. Follow her on Twitter @nanjala1.