Kiff No Beat, Cote d'Ivoire's Premier Rap Group, On Being the Blueprint For the Youth 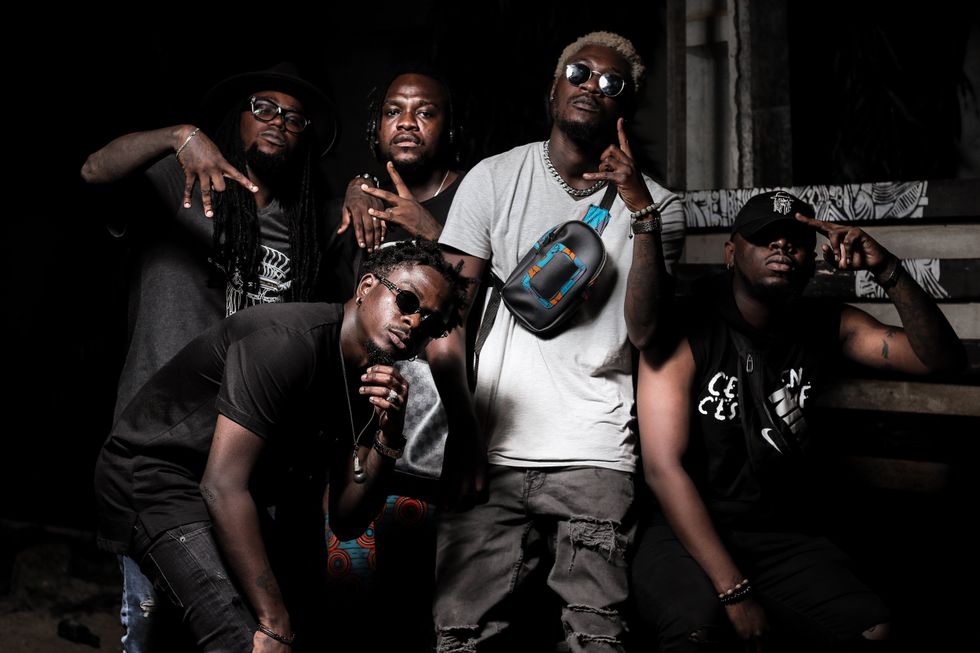 Kiff No Beat are riding a wave that shows no signs of slowing down.

I walk into a studio tucked on an unpaved road in Cocody, Abidjan, and I'm greeted by a young beatmaker, Tam Sir, the female duo, Nafasi, and the multi-platinum producer behind a number of Afro-French hits, Christophe Ghenda.

What's blasting from the speakers has me silently bobbing my head. Kiff No Beat members Didi B, Elow'n, El Jay, Black K, and Joochar aren't yet present. The artists I do see are on Africa Mindset, a label headed by Didi B, the leading member of La Kiff. A couple moments pass before Black K walks in and starts listening to another track made by Christophe Ghenda. Not too far from me sits the up and coming Congolese crooner, Cevin, waiting to leave for an interview.

Universal Music Africa has flown in Ghenda to diversify the sort of music their artists are releasing and evidently churn out bangers. It's Didi B's birthday and I am told to expect some delay. A few hours of waiting go by as artists shuffle in and out of the studio and more members of Kiff No Beat trickle in.

The group was founded in 2009 as the merging of two rival hip hop groups, JEKBOYZ and KIFF BLACK won a hip-hop competition titled, FAYA FLOW, and took their wins to producer Shado Chris to create hits for them. He catapulted their careers, and the rest is a history that is still being written.

With the albums Cadeau De Noël (2011) and Pétards D'Ados (2014), and mixtapes Cubisme (2015) and Made in bled (2018), under their belt, Kiff No Beat is slated to release a new record this year. Despite being newly signed to Universal Music Africa, they are seasoned in the game.

With over 10 years behind them, these men are riding a wave that shows no signs of slowing down. Their winning formula is an eclecticism that is a hit with the youth and adults alike—rapping and singing in nouchi (Ivorian slang) over trap and Coupé-Décalé beats. Where Black K, Elow'n, and Didi B are known for their raps, El Jay sings and Joochar sprinkles reggae and dancehall on tracks.

Kiff No Beat has not only inspired young rappers coming up after them but moved an entire industry towards blending hip-hop and afrobeats together—and they've now got competition from coupé-décalé artists rapping. Rap and coupé-décalé are dead locked in a fight to dominate Ivorian music and spectators are eating it all up.

When all five members have assembled, they posses a chemistry that lights up a room and rare are the moments that aren't filled with laughter. They speak with ease about who they were at the start of their careers, who they now and what it means to be ambassadors of urban culture at home and abroad.

Okayafrica: Who are your musical influences?

Elow'n: The idea of forming a group this size was brought on by French hip-hop group, Sexion d'Assaut. Seeing them made us realize it's possible. The way in which each member sings or raps depends on their influences. I'm influenced by American rap—T-Pain, Kanye West, Kendrick Lamar. They'll tell you theirs.

Didi B: My influences are more so singers and not rappers—Alpha Blondy, Meiway, Michael Jackson—Everyone with a unique presence about themselves. When we started, we did a lot of choreography, as well; we thought of ourselves more so as artists than rappers. We had idols who more so inspired the way we put on concerts or shows. There are a few rappers though, Booba and Lil' Wayne.

El Jay: I listen to singers like Mario and the greats who started R&B.

Black K: Same as them but we're inspired by everything, namely African music like Lokua Kanza.

I'm going to ask you all to describe each member of the group. Let's start with El Jay.

Didi B: El Jay is more so the melody, he's the softness of the group, he's also our go-to guy for afrobeats, when we have to depart from rap or trap, we count on him to bring it home. He's also the group's pop star.

Up next is Didi B.

El Jay: He's the dark rapper of the group. He's our dark side. He's the group's hardcore rapper.

Elow'n: He's the brains. He typically knows what to do and when. He's our strength. He's our third eye.

Black K: He's our leader. He knows when we should release a track. He's our sorcerer.

Elow'n: He's l'homme étrange (the mysterious man). He's black, obscure, dark. He's capable of everything. He can rap, sing and even flow on Ndombolo.

Didi B: He possesses a wide breadth of knowledge of afrobeats. When we want to get traditional or incorporate the use of guitar riffs, he's our go-to. It certainly comes from his family, from the music that his sister makes. (Gnahoré Okou Camille or Black K comes from a musical background as his sister, Dobet Gnahoré, is a singer, and his father, Boni Gnahoré, was a percussionist and a singer, as well) He's responsible for songs like "Ils on dit".

El Jay: He's our resident stylist. He's responsible for the styling behind a lot of our music videos. He's an expert when it comes to putting outfits together.

Elow'n: He's a hybrid and adaptable.

Dibi B: He's also the person who is the most shy in the group. He's like the rat in Teenage Mutant Ninja Turtles, Master Splinter, who never comes out.

Didi B: Elow'n is the only one who doesn't sing. He raps rapidly, it's his gift.

What themes do you cover in your music?

Elow'n: This isn't church music! We don't lie in our songs.

Dibi B: We do, however, convey messages. Our latest track "Yaka Dormir" is about working hard for your family.

You were previously signed to Da Carmen label, what has changed since your move to Universal Music Africa?

Elow'n: Soon after signing, we made a music video with Clarence Peters (Nigerian music video director), we partook in a show at Paris' L'Olympia, attended Cannes Music Festival and did huge features with Kaaris and Tiwa Savage. We've expanded. We couldn't of done any of this as independent artists. We are reaching new heights.

Didi B: Because we made things happen for ourselves at the start of our career, we've had help getting to the next level—the European and anglophone market. Because of them (Universal) we have new videos and a better understanding of where our money is coming from and going… When we started out, we were solely dependent on funds from concerts and shows at baptisms and weddings. We used to just randomly release music and nothing was monetized.

Elow'n: You can hear us in playlists on Air France flights. We have gone to Georgia to shoot a music video. Our songs are being mastered in countries like Pakistan. We can see clearly now. "C'est plus pour la mairie," (an Ivorian expression that means we are no longer out here working for free).

El Jay: There are really artists out here unknowingly making music for free!

When is the next album coming out?

What is the state of music in Ivory Coast?

Elow'n: Before, there was only coupé-décalé, now rap has come and imposed itself. It hasn't been easy. In 2003 or 2004, all there was was coupé-décalé; luckily, nowadays, everyone is talking about rap. There are now two styles that are definitely here to stay.

Didi B: Music has done well here. There are a variety of festivals and concerts popping up. This wasn't the case before. Before, it was one artist with a concert at Le Palais. Now, there are as many as 5 concerts, during the holidays, and 10 during the year. There are even award shows. Honestly, things are going well. Within our genre, things are going well. After us, there are artists on the come up.

Do you think this is due to you all?

Elow'n: We are definitely responsible for this.

What advice would you give to artists coming up under you?

Didi B: My advice is to try to understand your rights. It's also to be perseverant and work hard. I want to reiterate, 'Know your rights,' and be professional. If we signed with Universal, it was because we've always been professional. We paid our friends who made our covers, we did shoots for our covers, which isn't common here. Here, artists drop a track with a cover that's an image of them in a club. Universal saw how serious we were about our craft and it motivated them to work with us.

Elow'n: There is money to be made in this industry. It is important to know what steps to take. An industry where everyone wants to be Kiff No Beat is no good; you have to have your own identity, an identity that no one else has. That's what we did, we came on the scene as something new and refreshing. To be someone who inspires someone tomorrow, you have to be different from everyone else at your start. Be your own person. Don't sell gumbo in a market where everyone else is selling gumbo.

Do you see yourselves as ambassadors for your country?

Elow'n: We are conscious of the fact that there are a lot of youth who watch us and are inspired by us.

Didi B: There's a generation of people who are coming up like us. We are rappers but Tony, for example, is a photographer. Drogba once said, "On a ça aussi chez nous," (We have that where I'm from) We see ourselves as the representatives of urban culture, of rap, of beautiful music videos.

El Jay: There's a new generation whose entrepreneurial and is attempting to work hard and develop its businesses.

Audrey Lang is a writer and merchandiser based out of Boston. All photos by Wilfried 'Tony' Sant'Anna.