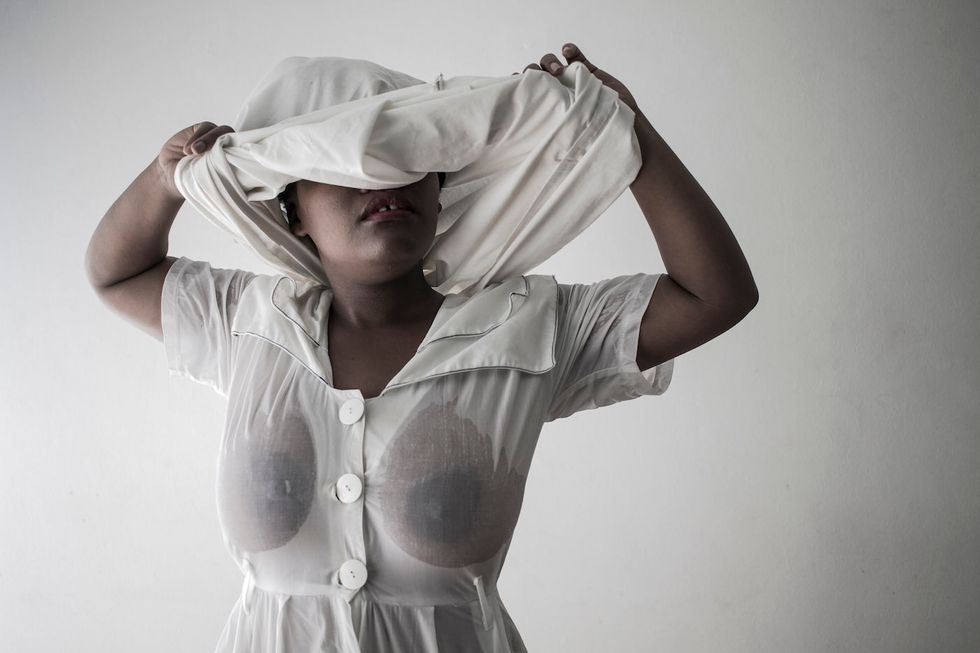 Koleka Putuma doesn't play by the rules in her debut anthology.

South African poet Koleka Putuma is a rockstar. She's not playing by the rules and her poetry is direct without being cliché. The Cape Town-based poet's debut anthology, Collective Amnesia, which was released in April this year, was accompanied by visuals—both photography and videos, something you don't see in South Africa.

She went against the odds when she released the book. “I remember a veteran writer that I had great respect for telling me: 'Publishing a book of poems in South Africa? You will be lucky if you sell 200 copies in your book's lifetime, and be grateful if 20 people show up to your book launch. Just know you are doing it for you,'" she once mused on a Facebook post just after her successful nationwide book tour in June. “So here we are, in less than three months since its release: a national tour, 13 cities, 17 launches, a prescribed text for second-year university students, four print runs, 2,000 copies later."

Collective Amnesia is currently number 1 on our bestseller list and it's an absolute must-read! @KPutuma https://t.co/L5HIczB6Hy
— The Book Lounge (@book_lounge) 19 July 2017

“She's born in 1993, and [her book] is already being read in Stellenbosch (University) and UCT (University of Cape Town)," says Milisuthando Bongela, editor of Friday, the arts and culture section of the newspaper Mail & Guardian. This is during one of the three Johannesburg stops of Putuma's book tour, which had other stops in places such as Durban and Eastern Cape. “I've never seen anyone do that," Bongela continues. “And when you get inside the book, you see yourself for once. The most powerful thing for me about this book, is that this person who was born in 1993 was never meant to experience apartheid or any sort of discrimination, has now written a book that archives her experiences in this so-called free country that we live in."

The cover of Collective Amnesia. Photography by Andiswa Mkosi.

Bongela is flanking Putuma at the Market Theatre alongside revered South African poet Lebo Mashile. Both of them can't stop singing praises to the ground-breaking poet.

Before Putuma opens the event with a reading from the book, Afurakan, another revered poet and co-founder of the poetry movement Word N Sound, has a few words of introduction. “At this stage," says Afurakan, “I would say she's the dream of the work that we do as a company—to be able to give young poets space for them to perform, to express themselves and watch them run with that opportunity and turn it into something magnificent."

Afurakan goes on to recount the first time he encountered Putuma. It was during the first South African National Poetry Slam, organized by Word N Sound in 2014. “Everyone had props," Afurakan describes the competition. “It was dramatic, but Koleka, with just three simple poems, won the slam. And she took that little credibility that came with that and ran with it. And three years later, look where she is now, with an award for directing, a 2016 PEN SA Student Writing Prize (for her poem Water), and she just launched a book."

Her readings take me back to the few events I've seen her perform at in Cape Town. Her book Collective Amnesia includes some poems she has read before. One of the most prominent being Water, one of her most popular pieces to date. It's surreal to hold an anthology of someone who speaks the way I do—with slang, making reference to the internet, hip-hop, Oppikoppi, Nike, God's medical bill, and has no economy for expletives. The South African publishing industry has its own types of books that it favors, and Collective Amnesia just wouldn't normally make the cut.

Which is why Putuma's book is a special moment. She was born only one year before South Africa had its first democratically elected president. She is one of the many voices of our generation that doesn't have any memories of apartheid, but is feeling its repercussions and fighting its own social ills such as gender-based violence, patriarchy, homophobia, and the like.

Collective Amnesia is written in a quirky and unconventional way. For instance, the poem Apartheid, which consists of just a title and a footnote, is an intense one-liner that will first make you chuckle, then ponder, and then realize how little has changed in post-apartheid South Africa for black people.

The poet celebrates and mourns her blackness, womxn-ness and queerness through the book's three sections—Inherited Memory, Buried Memory and Postmemory.

Writer Maneo Mohale described Collective Amnesia best in her review of the anthology on the Mail & Guardian: “The book reads as a deeply personal diary and as a public reflection on the ever-shifting politics of identity, in a country that is still deeply troubled by the past's complicated legacies."

And indeed, Collective Amnesia does come from a lot of personal experiences. “Before this book, about two years ago," Putuma explains during the discussion she's having with Bongela and Mashile. “I used to look at my mother and my auntie's choices and think, 'Why would you stay? Why would you choose that in that particular situation?' But after writing this book and having experienced things as a black womxn, I learned that, in that particular situation, your mother and aunt chose silence so that they could live, or so that there could be peace in the house, so that they could eat."

“What I like about this book, beyond talking about whiteness, white people, and white supremacy," says Bongela, “[is that it touches on] this very difficult subject of our uncles, family members, and [rape] apologists – that's very difficult to talk about. We haven't figured out a lexicon of how to deal with the bullshit that's happening in our families. It's easier to fight the public in the public sphere, which is necessary, but then when it's just us, ah, kunzima (it's difficult). And this book laid it all out. We as black people know what's going on in this book."

On the poem Memoirs Of A Queer Slave & Queer Person, which is just four lines long, Putuma writes poignantly about the dangers of being queer in South Africa: “I don't want to die with my hands up or legs open." On Xmas Dinner With Skeletons, she writes about domestic sexual violence: “Your perpetuator has your uncle's eyes and his cheap brandy breath/ How many abortions have fallen out of your mouth while counting the men in your life."

On Black Solidarity, she talks about the hypocrisy of black male activists, and the sexism and patriarchy of such men: “How come your revolution always wants to go rummaging through my underwear?... How come references to your revolution are limited to Biko and Fanon and Malcolm?/ Do you read?/ Your solidarity, it seems, is anchored by undermining black womxn's struggle."

“If you are a black womxn in this country, you either get a bullet in your head, and they kill you fast, or they kill you slow over the course of a lifetime," says Mashile when her turn to speak comes. She starts by referencing her experience as a black womxn poet in South Africa; how the media never focused on her work, but her celebrity and fame. “None of us are spared," she continues. “It's important to have tools that are going to be a lifeline for you, and I think this book is a lifeline for the second-year students who are studying in the most racist institutions in this country. It's a lifeline for all the young womxn who are working in corporate South Africa, who follow Koleka's work online. It's going to be a lifeline for anyone who feels invisible and unheard, and who needs the reality to be validated."

Mashile's face beams as she admits to being an avid follower of the young poet's work, and how she admires her methods of getting her work out. “She's exploding the model of South African literature, which is a wonderful thing," Mashile says. “She is emerging, and with authority, to claim her space and audience. The fact that she is now on her third print, and the book has just come out is extraordinary. I'm watching with hawk eyes, dedication and admiration, because you are inventing a new model for us in South Africa. And it's important. The work that you are doing is very necessary. The people who you are opening the way for… there are young girls who will be reading this work to survive, and not drink pills and take their lives. Ten to 15 years from now, they will reference and thank you."

As she sits now, there is a slide show of recurring portraits of the poet on a screen behind Putuma. The images were shot by photographer Andiswa Mkosi. One audience member asks her about the collaboration with Mkosi, to which Putuma responds, “This was not going to be the cover of the book. There was another cover that I wasn't excited about. Then Andy and I got together, and the first thing she asked me was, 'what are you trying to say in this book?'"

Mkosi asked Putuma about the themes in the book and read some parts of the anthology. “Then she said," continues the poet. “'What I'm getting from it is things or faces and names that have been hidden, now being unveiled.'

So the theme for the photography was about hiding and an unveiling. “Unveiling memory, amnesia, stories of black mothers and white babies and us playing with our dolls, and black womxn," she says. “Initially not all of them were supposed to be in public like this," she says pointing at the screen. “We were supposed to choose one for the cover. But they were so beautiful and said so many things about the work that I was like, 'I will take them wherever I go.'"

The images are currently on sale as prints, independent of the book, because Putuma's imagination just goes beyond the box that has been placed around artists. What her next move is, one may never know, and that's the beauty of being her fan.

All videos by Jarryd Kleinhans

Collective Amnesia is available in bookshops around South Africa, and on Amazon.