Growing Up LGBT In East Africa 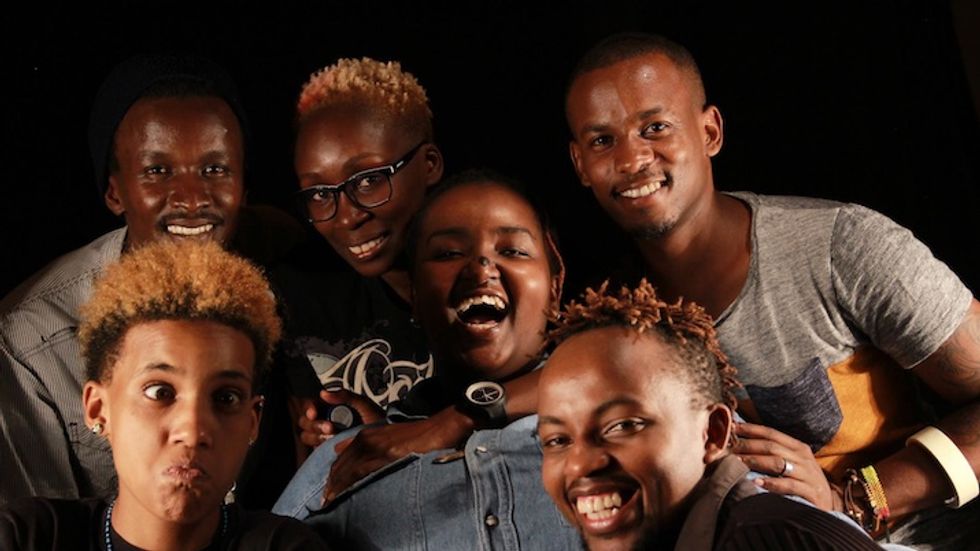 Digital media organization None on Record shares a series of interviews with individuals in Nairobi about growing up LGBT in East Africa.

The None on Record team minus Thiam (Juelz Laval, Eddy Mokaya, Yvonne Odour, Jonah Voss) with two interviewees from the Growing Up LGBT in Africa series (Njeri Gateru & Solomon Wambua)

None on Record is a digital media organization that works to document stories from LGBT communities on the Continent and throughout the Diaspora. Founded in 2006 by Selly Thiam, herself a Senegalese lesbian living in the U.S., the project began as a way of collecting oral histories of LGBT Africans. The organization previously produced a series focused on LGBT Africans seeking asylum in the UK, and in October 2015 they have plans to host a three-day cultural arts festival in Nairobi.

Now, for International Day Against Homophobia and Transphobia today, None on Record conducted a series of interviews with individuals in Nairobi about growing up LGBT in East Africa. In the collection of intimate clips below, participants ranging from an executive chef and a Legal Officer at Kenya's National Gay and Lesbian Human Rights Commission to the Executive Coordinator of the Gay and Lesbian Coalition of Kenya and Ugandan transgender activist and scientist Cleopatra Kambugu, share their stories of coming out and messages for African LGBT youth. We spoke with Thiam over email about the series and her work collecting stories from LGBT communities throughout the Continent and the Diaspora.

Okayafrica: How would you describe the LGBT experience in Kenya?

Selly Thiam: Kenya is considered a more progressive space for LGBT issues in East Africa. There are conversations (albeit sometimes inflammatory) about LGBT issues on morning talk shows and there are newspaper articles written about LGBT issues that are a bit more balanced than other parts of Africa. Recently the supreme court in Kenya ruled that the National Gay and Lesbian Human Rights Commission could register as an LGBT organisation. That is a huge win. With that said, Vice President William Ruto publicly declared that there is no room for gays in Kenya after the supreme court ruling and a national tabloid just published the photos of 100 people they allege are Kenya's most prominent gays and lesbians. There is still much violence perpetrated against LGBT people. People deal with extortion by police, lack of access to health care and employment. LGBT people face illegal evictions from their homes and being ostracized by families and communities. Some religious leaders add fuel to the fire by actively preaching against LGBT people, calling it a lifestyle, unAfrican and perverse. Still, there is a vibrant LGBT community in Kenya that is becoming more visible everyday. There are active organisations working towards equality, writers like Binyavanga Wainaina making sure that there is a counter narrative being discussed in the larger society. There are films and cultural production happening that are telling honest and powerful stories about LGBT people. LGBT people are making space for themselves and the community is growing and creating a positive impact on Kenyan society.

Okayafrica: What's the LGBT cultural scene like in Nairobi?

Thiam: There is so much happening in Nairobi. Amazing films being produced, musicians who are LGBT putting on shows. Poets and writers sharing the LGBT experience. There are parties, terrific social spaces that exists. Nairobi is a cosmopolitan city and that reflects in the culture scene here.

Okayafrica: How did you find the interview subjects in the Growing Up LGBT In Africa series?

Thiam: We knew alot of people from working and living in the community. It was great to include Njeri because she works with the legal organisation that just won that important court case. It was important to us to include Cleo because she has such an important story about working as a scientist and then being outed as gay, even though she is transgender, in the the Ugandan newspapers. She is a testament to how bad laws impact the lives of LGBT people. I asked Chef Kendi because I eat at her restaurant often. It is a popular spot in Nairobi. The food is amazing and she is out and living her life as an Executive Chef. It was important that we not only include activists but people who are working in different professions and are out and proud.

Okayafrica: Can you tell us some of the history on None On Record?

Thiam: I founded None on Record in 2006 as a documentation project to collect the stories of LGBT Africans. I was a radio producer at the time and began collecting the stories in an audio format. I started in the Diaspora and then collected in South Africa, Gambia, Senegal, Kenya and the project just grew from there. At one point I had over 300 stories from Africans of all walks of life. I came to Kenya to train a group of activists on digital media and documentation in 2010. After that training about four activists said they wanted a more sustained digital media presence in the region. We worked together to found the None on Record office in Nairobi, Kenya and started programming in 2013. In the first year we focused on training African LGBT activists in digital media and documentation. It is important the LGBT Africans document their stories and narratives. As an organisation we have a strong commitment to teaching and sharing information. In our next year we began to expand our programming--we now have a fellowship program that brings in people from the communities we work in and train to work with None on Record further on productions. We launched our Media Engagement Program that works with journalists in the East Africa region on fair and balanced reporting and we have a culture and innovation program where we bring African LGBT artists and culture makers together.

Keep up with None on Record on Facebook and Twitter. Watch their 'Growing Up LGBT in Africa' series below.