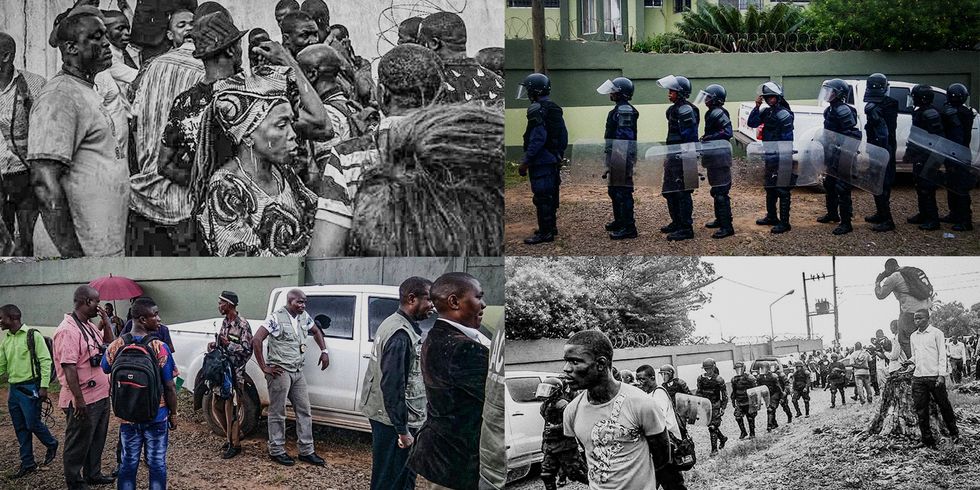 Has a Global Witness report detailing high level corruption finally forced President Ellen Johnson Sirleaf to do something about corruption?

A crowd of partisans gathered outside to support Sherman, one of Liberia's most powerful political figures. Others were there to support the investigation into a damning report issued by the international corruption watchdog Global Witness (GW), titled “The Deceivers” detailing how the British company Edmond and Groves bribed their way into huge acquisitions in Liberia, Mozambique and Guinea.

The Taskforce, set up by Liberian President Ellen Johnson Sirleaf to investigate the alleged corruption by top government officials sent shockwaves through Monrovia when it issued arrest warrants and court subpoenas of financial statements to help with the investigation.

The Task Force's head, Liberian lawyer Cllr. J. Fonati Koffa, began executing a series of arrests and a search warrant for the Sherman and Sherman law firm owned by Sherman. Koffa was Chairman of the opposition Liberty Party until his appointment by the President as Minister of State without Portfolio one week before the release of the Global Witness Report.

The report released May 11th, details how Sable Mining Africa Limited, a subsidiary of Edmond and Groves, pushed its way through an already corrupt business climate in Liberia, making use of highly placed public officials to get their deals sealed. The company even went a step further by using bribes to change Liberian law to gain greater access to a much coveted mineral deposit inside Mt. Wologizi.

Sable allegedly went through the country’s most powerful men: The Speaker of the House of Representatives J. Alex Tyler, the Chairman of the Ruling Party now Senator of Grand Cape Mt. County, Sherman, the then head of the National Investment Commission Richard Tolbert, Presidential aide, now Senator, Morris Saytumah and a number of other powerful people.

“By August 2010 Sable had paid out more than $200,000 earmarked for some of the most powerful people in Liberia,” Global Witness states in its report. Another $500,000 was intended for two important figures known only as Bigboy 01 and Bigboy 02. Speculation into their identities is rampant.

“The payments are listed in a cache of documents leaked to Global Witness, including a spreadsheet from Sherman’s law firm listing many of the biggest sums. Alongside the bribes, thousands more went on entertaining the president’s son, the documents show.”

This well organized corruption allegation has caused serious outrage in Liberia, not because the people are surprised by it, but simply because they feel President Ellen Johnson Sirleaf has not done enough to fight corruption by bringing people accused misusing the public trust to book.

Christian Nelson a Liberian talk show host, now based in the US, believes the fight against corruption in Liberia is nurtured by a system of governance where the executive refuses to exercise oversight power.

“Why corruption is the way it is in Liberia is simple, no system, plus laws are not enforced,” he said in an email to Okayafrica.

“Since the birth of the nation,” writes Nelson, “Liberia has made the fight against corruption priority number one but cannot get past stage one. Oh yes, there are enough laws on the books to even send Satan to hell so why is Satan still hanging around?”

Nelson’s views reflect how many Liberians feel about the fight against corruption. Many of these public officials take these corruption allegations as a joke, even using the media in Liberia to ridicule the GW findings.

The President has gone beyond just setting up a board of inquiry into these grave allegations, giving the team prosecutorial powers to go after anyone who is found culpable in the GW report.

Yet the Chairman of the ruling Unity Party Cllr. Varney Sherman has been adamant that he will not submit himself to the panel set up by the President to investigate these allegations of bribery.

“Is there a place in our jurisprudence where the accused submits himself to an investigation?” Sherman asked a local talk show host Mamadee Diakite on last Tuesday.

This refusal of Sherman refuses to appear before the committee to answer questions about his involvement in the Sable mining deal, has led the committee to take the stand that it is taking now by seeking police enforcement to make him comply. But during this same interview last week Sherman gave some clues on what his role in Sable Mining deal was.

"Since Sable Mining was not registered to do business in Liberia as a company, it couldn't open a bank account,” Sherman said.

Now the question is how many more public officials who own private entities are doing this? Why is Sherman not being asked the right questions? There seems to be a huge conflict of interest here as Sherman was Chairman of the Ruling Party and others involved held key positions in government and had immense power to influence decision making.

Sherman was Sable Mining’s lawyer and banker at the same time. Such conflict of interest is illegal in Liberia, especially as it relates to public officials.

The Liberian code of conduct for public officials states: “1.3.6 Conflict of Interest: is when a public official, contrary to official obligations and duties to act for the benefit of the public, exploits a relationship for personal benefit.”

But the Committee Chair Koffa in a statement to OkayAfrica said his committee has invited all those implicated in the GW report and if they are found culpable, they would be forwarded for prosecution.

“Our work is a national duty. We will go where the evidence leads us without fear or favor,” said Cllr. Koffa.

Despite this assurance some Liberians are looking at the committee as just another one of those appointed by the President that may have no impact. This pessimism from the President’s critics stems from the President’s inability to prosecute officials in her government who have been indicted by several audit reports. Some feel she has not stayed true to these words uttered when she took office in 2006: “Corruption, under my administration, will be the major public enemy.”

But supporters of the President still believe that she is resolved to fight corruption as promised more than ten years ago. Togba Emmanuel, a student of International Security Studies at Coventry University in the U.K told OkayAfrica via email that the President has done a lot to fight corruption, but the challenges are embedded in a political culture built over the years that ridicules honesty.

“How can her government be cleansed of corruption is a question that is grim to answer,” Emmanuel Said.

“The roots go so deep and demand such a radical reordering, among other things, the appointment of an independent Taskforce charged to investigate the Sable bribery links will serve the purpose for a new day if treated with sincerity.”

Despite these strides, many Liberians are skeptical about the final outcome of this investigation many feel it is just another charade by the President to show-off to the international community but the response to these allegations has been met by huge public outrage both at home and abroad. These actions taken by President Johnson Sirleaf against the alleged perpetrators would go a long way in showing that she is sincere about fighting corruption.