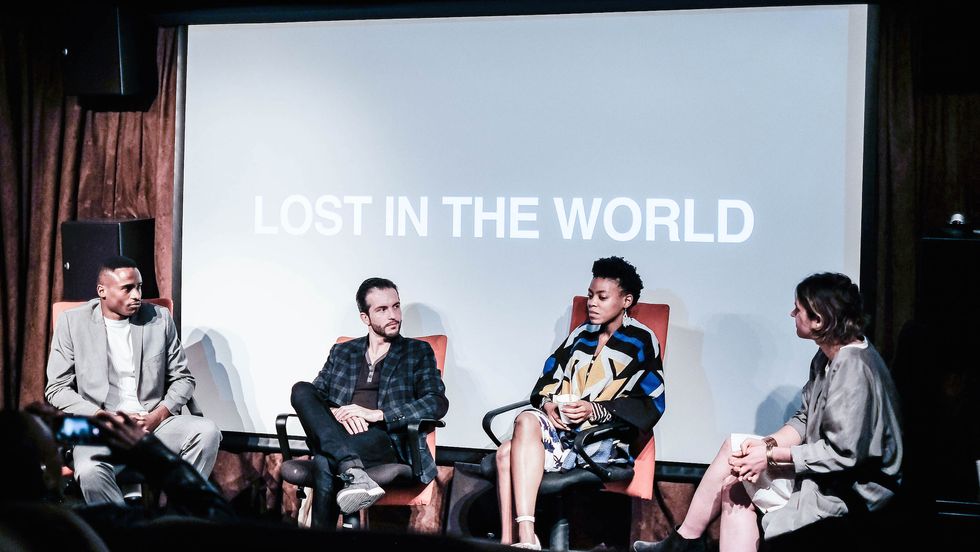 Xolelwa ‘Ollie’ Nhlabatsi, Honey Makwakwa and Brendan C. Campbell in conversation following the Johannesburg premiere of 'Lost in the World'

Johannesburg-based filmmaker Xolelwa ‘Ollie’ Nhlabatsi’s Lost in the World shines a necessary light on the issue of corrective rape in South Africa through the story of a Johannesburg police officer seeking vengeance following the brutal rape and murder of her longtime girlfriend. The cop, played by actress and stylist/designer Honey Makwakwa, loses her mind and soul in the process.

A Blackweather and Hand Drawn House production, the film made its online debut earlier this month as part of the New Queer Visions Film Festival’s shorts compilation, Lust in Translation. More recently, it had its Johannesburg premiere last Thursday at the National Film & Video Foundation.

What follows is an edited version of the conversation. Head here to read the full transcript of the Q&A.

Alyssa Klein: Honey, tell us about your character...

Honey Makwakwa: Whitney is a police officer, and she’s doing great, solving cases, being a hero. She’s got a girlfriend. And next thing, everything she knows is gone. Her girlfriend is raped and murdered, and the police force that she works within and that she loves shows no support. All of that turns her into someone I don’t think she knows. This is where the drugs come in, because we all have different coping mechanisms, and I think she just needs a way to kind of get through things.

Eventually the police force drop the case––they’re not really interested––as is the case with 99 percent of reported rape crimes in our country. She’s not okay with that, and she’s pretty much destroyed by that.

Alyssa Klein: Ollie, how does the film draw from real-life experiences?

Xolelwa ‘Ollie’ Nhlabatsi: I wrote the script four years ago, but they were a heterosexual couple. And I left the film sitting there. It didn’t have much meaning to me as it was. And then there was a German newspaper who came down here to look at the all-lesbian football team in Katlehong. They went to look at corrective rape in the townships and see what is actually happening, because I suppose they didn’t really know what corrective rape was. I was assisting them, I was basically their fixer for the duration of that time. And in that time we went to a lot of interviews with ladies who are rape victims, who are friends of rape victims. And they were telling us all the same stories.

The main inspiration for why Lost in the World is the way it is is because they showed us a place in Katlehong where there’s no roofing, there’s a bunch of trash in the place. There were kids playing and what not, and the kids actually found one of their friends dead, raped and murdered there. And then I think a week later the police put like one strap up, but you could easily walk in if you wanted. And still today that case hasn’t been solved. I found out that a lot of these cases weren’t solved. I knew about corrective rape, but I didn’t know the extent of how the victims are treated through our justice system. I wanted to hopefully give some sort of sympathy or some sort of understanding that even though you didn’t get justice, you’re not alone. I wanted this film to embody that “Fuck them, kill them all, whatever you need to do to survive.” That was the inspiration for the film.

Alyssa Klein: What has the response been outside of South Africa?

Nhlabatsi: Pretty good. When we showed it in London for the Film Africa festival, one lady asked “What is corrective rape?” I was like, “Okay cool, great. Now we’re having a debate where I can describe and tell you what the fuck is going on back home with our very unique situation.”

I thought that the local market would be more receptive of it, but it seems like the international people are more receiving. I think because they can see it as more of an art form, and maybe South Africans see it as shaming themselves, or guilt tripping themselves, which it is. If you feel guilty, you need to fix that, you need to work on that. So that these situations aren’t allowed to happen. If there were more people around these ladies, and more people in power supporting them and against women abuse, then we [might have] more money to find justice, or to just give it [the issue of corrective rape] more of a spotlight.

Alyssa Klein: What are your plans for the film in the future?

Nhlabatsi: It’s currently online. You can get it online at Lust in Translation as a part of the New Queer Visions Film Festival strand. It’s part of a grouping of other short films that talk about LGBT issues. But eventually, we’re going to put it on YouTube. I’d like it to go to schools. I’d like it to be used as an educational tool. I think it could shed light or give people a different perspective if they didn’t understand. I just want people talking. That’s the point.

Audience member: Can you unpack the thinking behind the non-linear narrative?

You’re also kind of confused and kind of lost with it. It forces you to pay more attention to the film, and then kind of figure it out yourself. But I suppose the victims don’t have that, all they have is this feeling of confusion and lost. I wanted to translate that to the audience. I didn’t want it to be easy for you guys to watch. I wanted you to go home and stew.

Audience member: What was the choice behind not showing the rape? You showed drugs, violence. Why not the crux of the story?

Nhlabatsi: My first audience was for rape victims, so I didn’t want to rehash it. They live that all the time. It was less about the glorifying blood and stuff. That wasn’t the point. The point was for audience members to take away whatever they feel, or however they relate to it. And putting the rape in it, it’s kind of like a translation of that hidden guilt, that you’re like “What is this thing?” It’s all about rape but you don’t see rape.

Audience member: I was really interested in the choice not to show it. And also just the fact that you wrote it. As women we always feel like rape is our problem. And actually it’s not, it’s a male issue. So kudos to you for writing from a male perspective something that affects us every day.

Nhlabatsi: Women are my family. There’s not many of us [guys] left. The films I like are usually female-led films, because they show a different perspective. The male gaze and the male privilege is so boring, and you’ve seen it again and again. Women have a better perspective and more understanding than men. Men are kind of, unfortunately, dick-driven.

Audience member: You spoke earlier about how your initial audience was the rape survivors. When you were creating this, who were you making it for?

Nhlabatsi: It was victims of rape initially. At the time, and I still think now, there’s not really a film from the rape victim’s perspective. So the police might be more important in the film. I wanted it to be a film where Whitney’s character embodies this wraith, if you would like, that is uncompromising. She will not stop until she gets what she wants. If a victim of rape can see that this woman has this drive to do whatever she wants, to stop whatever she wants, then you can also, in whatever capacity you have, and whatever you need to do, you can also do it. There will never be justice, and you will never have that comfort, but as long as you know that you yourself had the agency, and you didn’t let other people take it away from you, and wait for people to give you justice, you take it yourself, in whatever capacity… The point is to say “Yes, you are a victim. But you mustn’t take that connotation of victim and shaming.”

Nhlabatsi: It’s not yours to hold.