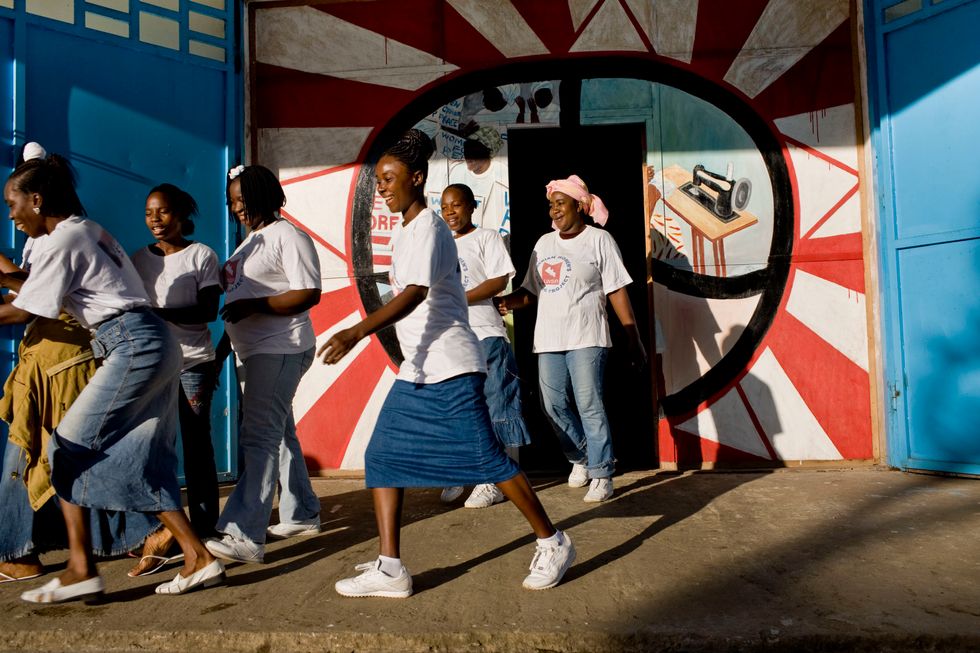 In the first installment of our series profiling people producing cool stuff on the African continent we chat with the Liberian entrepreneur Chid Liberty.

Our new series, Made In Africa, will take a look at the best of what's being made on the continent, from clothes to food and other products making waves globally. Our first edition is with Chid Liberty, the Liberian entrepreneur who has put African made clothes in some of the world's top boutiques.

DIASPORA—Chid Liberty is on a mission to promote "Liberty & Justice" with his aptly named manufacturing company. The fair trade initiative sets out to employ and empower Liberian women.

With "Liberty & Justice," the Liberian-born entrepreneur marries his love for clothing and apparel with a desire to create social impact in his home country. One of the results, is the street-conscious line Traplord x Uniform—a recent style collaboration with U.S. rapper, A$AP Ferg. The collection's look-book was also shot in Liberia and features a group of local Liberian models—every aspect of the line was created with the country in mind.

We got the chance to speak with him and he gave us a behind the scenes look at Liberty & Justice's production process, and he tells us what it was like creating his new look-book. Read our conversation below.

OkayAfrica: So Chid, tell us a bit about your background.

Chid Liberty: I come from Liberia. I was born there and left when I was 18 months old to follow my parents to Germany, where my dad was a diplomat. My family then moved to the States, where we were first based in California then in Wisconsin.

I started my first business at 16, sold it at 19, and have continued to work on projects that whole time. In my late 20s, I found myself thinking about going back to Africa and doing something to contribute to Liberia's peace and stability. That's when Liberty & Justice started.

OKA: How did you first get into fashion?

CL: In a way I feel like I've always been into fashion. I don't mean to be like Kanye, "I've always had a fashion for fashion" (laughs) but, as a kid, for my real first company, we made tie-dye t-shirts and sold them on the street.

While working in the music industry, I was really into merchandising. Really this last pivot came sort of backwards. I was more interested in figuring out a way to provide jobs for Liberia. The apparel industry just ended up being it. In that, I got to marry a personal passion with this economic and career choice.

OKA: What were those first days of Liberty & Justice like?

CL: We were interested in working with women that were part of Liberia's peace movement and, as we started working with these women, we basically were just trying to figure out: what can we do for them?

What they really wanted were jobs. There's 80 percent unemployment and 87 percent poverty in Liberia. We started thinking: what are the things that they can make for an international market? For us that was apparel. That was really the genesis of it.

OKA: What are some of the biggest challenges that come up with having "Africa’s leading Fair Trade Certified apparel manufacturing company," as your website describes it?

CL: The biggest challenge to date was the ebola outbreak. That almost took us out of business. Also, getting a building, getting up to the standards for American buyers, plus getting investment incentives in Liberia and getting them to actually honor those incentives is not easy. I would say there's an unbelievable number of challenges and we do our best to trouble shoot them.

OKA: Where do you get your clothing material from?

CL: Because we have such a variety of products it really depends on the product. The supply chain for the majority of our products is made in Africa. We like to say 'dirt to t-shirt.'

OKA: Tell us about your workers at these factories.

CL: The workers in Liberia are all women, there's guys that do security and other jobs but, like I mentioned, we came about across these workers working with women's groups that were part of the movement for peace in Liberia.

OKA: Walk us through it: how does a product make it from the factory in Liberia to an online order place in the United States?

CL: Generally, our t-shirts come from cotton grown on the ground in Africa. Usually in Burkina, Mali, or Senegal, but sometimes other places we have in East Africa. The cotton usually goes from the cooperative to a general facility that aggregates and sells it. A lot of these facilities are nationalized.

Those companies sell directly to one of our partners—our two biggest milling partners are in Morocco and Uganda. They turn that into yarn, then, in the same building, that yarn is turned into fabric, which could a knit fabric for a t-shirt or a for a hoodie with graphics. This is were t-shirt and hoodies the majority of our business provides get made.

Generally, in the same building, that t-shirt is cut, sown and printed—like with our A$AP Ferg Traplord x Uniform collaboration. ASmetimes that fabric is sent to Liberia and Liberia will do cut and sow. Afterwards, the t-shirts get shipped to a warehouse in New Jersey, then a customer orders it and it gets shipped from there.

Based on the customer's purchase, an order is then placed at the factory in Liberia for a school uniform to be made and given to a child.

OKA: You guys also have the Made In Africa factory in Ghana?

CL: We now have a couple of partners in Ghana, including the one run by the ladies from Studio One Eight Nine. We haven't done a lot of production there, mainly sampling. Most of our production is coming out of Morocco, Uganda, Ethiopia and Kenya at the moment.

OKA: How did this Traplord x Uniform collaboration with A$AP Ferg come up?

CL: I was speaking to one of my mentors Jon Cropper, probably one of the best marketing strategists I know, and he said, "hey you should meet Geno [Sims], we used to work together at Bad Boy." He mentioned that Geno was managing Ferg and told him what I was doing with Uniform. Geno got back saying, "hey, Ferg is a designer, you guys should work together, I'd love to connect."

They presented the idea to Ferg, who's a ridiculously generous guy, more than I've seen other rappers or celebrities I've worked with be. So, me and Ferg essentially just talked on the phone and vibed. Eventually, Ferg was like, "yeah I wanna do it but I wanna come to Africa."

Last month, we got on a plane together and went to Liberia. We went to the factory, met the kids that got the uniforms and shot a film for TIDAL. His team and mine got along really well while working together, so Ferg mentioned that he'd like to be a partner in this business. I was like, "well we need help in design and direction, what if you become creative director and take a stake in the company?" So that's what ended up happening.

OKA: How was the visit to Liberia with A$AP Ferg?

CL: All of that was amazing. To me, the coolest part about it was when I threw a surprise pop-up party on top of the Ducor Palace Hotel, which has a beautiful panoramic view. We threw a party on the top of the building, you could see all of Monrovia, you could see the ocean, West Point, where most of our workers live, the US embassy.

So we threw this crazy party and we had a traditional dance troop join us. Ferg got up to dance with them and it was super weird because it was almost like he knew all the breaks. So I said to him, "dude, it was like you guys knew those dance moves." He was like, "yeah, 'cause my grandma taught West African dance in Harlem."

His grandma was the 'back to Africa' lady in Harlem. My friends had met his grandma and she knew the specific drum pattern for her family in Ghana, she's the Africanist talking to you about pan-Africanism. He was in Africa with his mom, his uncle and his cousin, we were there with a bunch of his family members, this for them was like their mecca.

OKA: Tell us about the Traplord x Uniform lookbook. Did you find the models on location in Liberia?

CL: Yes, we street cast the models in Liberia, we wanted to shoot there to have an authentic feel and communicate the fact that this was straight from African streets and made in Africa. Also, that it has a give back component was happening in Africa. So we went out and scouted models. One of the models was actually the production assistant on the film with TIDAL, another one of the models was someone we found at one of the universities.

OKA: How did photographer Daniel Arnold get involved?

CL: So Daniel Arnold and I went to high school together. Earlier, in October, right before we launched our website, we had a contest to see who could get people to refer their frienns to our email list. Whoever got the most people to sign up, won a free trip to Liberia with us. It was a bit unfair for Daniel, who put it up on his Instagram and blew everybody out of the water.