Made In Africa: Threaded Tribes Is Tailoring a Renewed Appreciation for Hand-Woven Fabrics 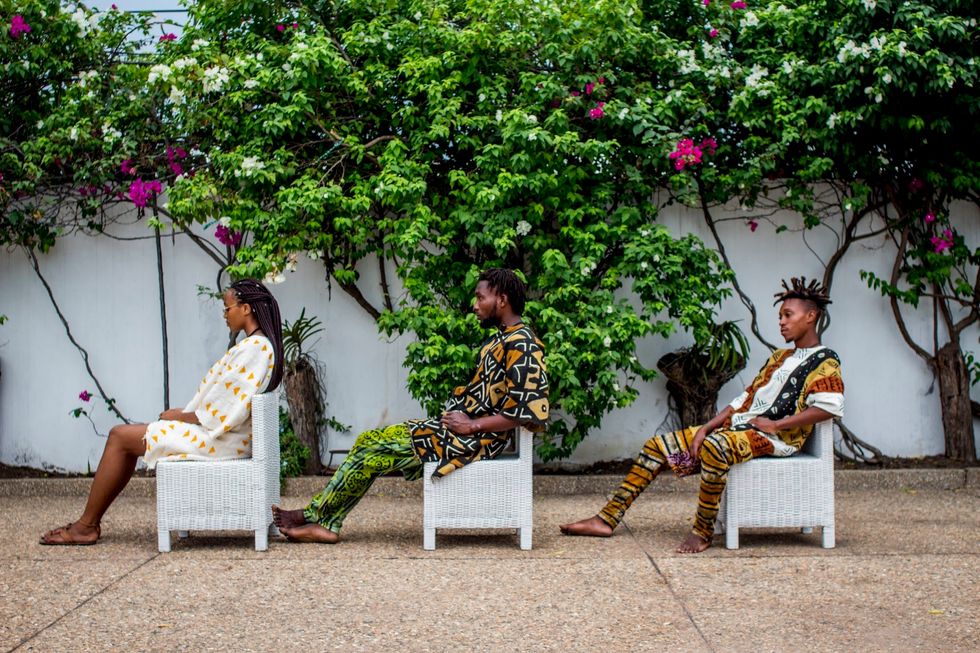 In conversation with Awurama Mankatah, the Ghanaian creative designer and manager of Threaded Tribes.

Awurama Mankatah is a young Ghanaian stylist, creative designer and manager of luxury clothing and visuals brand, Threaded Tribes. She hit the trail with Tribes (short for Threaded Tribes) 3 years ago, and has since mixed outstanding self-fashioning with a thorough and refreshing aesthetic sense to fashion a brand which is naturally relatable with a distinct subgroup of society—"the carefree and unique."

It says something about the impact of Tribes that their vibrant, hand-woven pieces—which range from cloaks to dresses—aren't only popular among Accra's cool kids; you can find the brand in concept stores from Elle Lokko in Accra to GLOBUS in Zurich. Tribes' garments is due to showcase in Paris this weekend at Innov'Ethik Fashion Week.

We spoke with Mankatah about the beginnings of Threaded Tribes and touched on some questions pertinent to her work as creative designer and founder of the brand.

moshood for OkayAfrica: Have any of your current career paths been influenced by some early life experiences of yours?

Awurama Mankatah: I think my career paths have all been influenced by my existence; just me being here. Threaded Tribes, for instance, is just like a path that fell into my many paths. And I went with it. So, I wouldn't say anything in particular has shaped me and made me want to do this, but everybody strives to survive—to make money, be comfortable—and I've always been into business. I like to add to the resources that the world has given me and make more out of them. I remember in my high school days, I would download songs off of Waptrick and bluetooth them to my colleagues for, like, 30 Ghana Pesewas a song. In my first year at university, I was selling hair; because it was quite in demand and I just so happened to find a good plug. So it's stuff like that; little interests and hobbies that come along the way which I follow and make something out of.

Tell us about Threaded Tribes and the story behind the name.

I was in a market the first time I came across the mud cloth fabric, and I was awed by it. I thought people could be doing shit with fabric like this and I hadn't seen people do that around me. I thought to myself, "I'd like to be wearing this." The 'threaded' part of the name comes from the mud cloth—when you look at it, it's very carefully woven together. And 'tribes' comes from all the patterns and symbols that the cloth had, and, beyond that—the notions of unity and togetherness and just finding a place to belong. Also, when you further consider 'threaded,' it's not just about mud cloth. It's also about other kinds of fabric that we have in Africa like kente, baule and other kinds which are all intricately woven from scratch.

The name evinces an image of communities that are literally closely-knit around a common identifier. What are your personal thoughts on style and how it intersects with people's identities?

The reason why I even started Threaded Tribes was personal. I discovered mud cloth and I wanted to wear it all the time. But it was just too good to just keep to myself. I feel like people's style and their personalities intersect a lot and it's necessary for us to be able to wear whatever the fuck we want, however we want to. Threaded Tribes is about creating cool things for people who are, say, trying to find a tribe and stick to it; and I find that for a lot of people, as soon as they latch on to the garment, it becomes their personal style. I know some people who have about nine of the garments in their closets. It's what they wear, their everyday thing; it becomes something to identify them by. So, if, say, person A sees the next person wearing the same thing, I think they realize that 'Hey, that's my sis.' As in, they realize they could have some kind of affinity.

Do you have a particular design and crafting process for Threaded Tribes' garments?

There is a routine that I have: I order the fabric—from Mali, mainly—but also from Burkina Faso and Ivory Coast. When the stuff gets here, I do all of the designing I need to do, and then I take them to production. After, I make visuals for them, which is one of my favorite parts of the process. But because Tribes is not only about the fashion aspect, but also about visuals and a channel for myself to release and spread my light, I consider all these things when I go on to create and make the visuals, which process involves things like traveling to other regions of the country just to get the vibes in there, you know. And then it all comes down to sharing on social media.

How do the concepts of form and function play out when you're conceptualizing or making your products?

It's a balance of the two. I like aesthetically pleasing things, but it also has to work—to be practical and comfortable.

There seems to be deliberate attempts at diverse representation with your models, though I'm personally yet to see plus sized ones. What's your criteria for casting?

I happen to meet all these kinds of people and therefore I shoot with all kinds of people, and time is infinite so I definitely do believe there'll be a time for every kind of identity.

Issues regarding fair trade and ethical treatment are quite pertinent ones in the industries with which you've cast your lot. How do you make sure you're clear of these things in terms of where and how you source your material, who and how you compensate, etc.?

I like to be authentic in all ways. And a part of that ethos, for example, is not getting up to go and have cheap cloths made, and produced in bulk, for extra profit, at some other person's detriment. With the fabric for instance, it has to come directly from Mali or Burkina Faso. With baule, I make sure I get it from Ivory Coast. Regarding production, I do all of that right here in Ghana, and I make sure that everybody I work with is deeply satisfied. My tailor Israel and I have grown so much together—financially and otherwise. And I'm proud of that. I've seen him expand his own business all through profits we've made working together. From the start, he's stated his prices, and I pay him what he asks for.

And from where you source, have you been to these places?

I intend to go myself. I just work now with someone who goes to these sources and gets the stuff from them. But I've long planned to start going to the source myself—it's been my goal. And I'm definitely doing that for my next business trip.

What have been some of the highlights in your journey that you've been most pleased with?

One of these was going to Geneva earlier in May, for the Afrodyssee Fashion Show and Festival. The organizers reached out on social media and invited me over. I took some of my things to sell with no salesgirl experience at all, and it went amazing; I cannot wait for next year. I got to debut some designs as well. So funny, people bought my things during the day, and at night during the show I saw at least seven of them wearing what they'd bought from me earlier. Afterwards, people came running to my booth to get some of my stuff that they'd seen on the runway. It was really amazing. Also, supplying to cool concept stores; being able to supply to these concept stores around the world is a big deal to me. And just recently, being a part of young creative people who spoke to summer school students from Ashesi University about the work we do and related things. That was such an honour for me.

Are there plans on releasing a new collection any time soon?

Well, Tribes is constantly releasing new things. However, look out for the dementor cloaks; they're really fire, I must say. Those are coming up, along with other things.

moshood lives and writes from Accra. He tweets here: @formoshood.