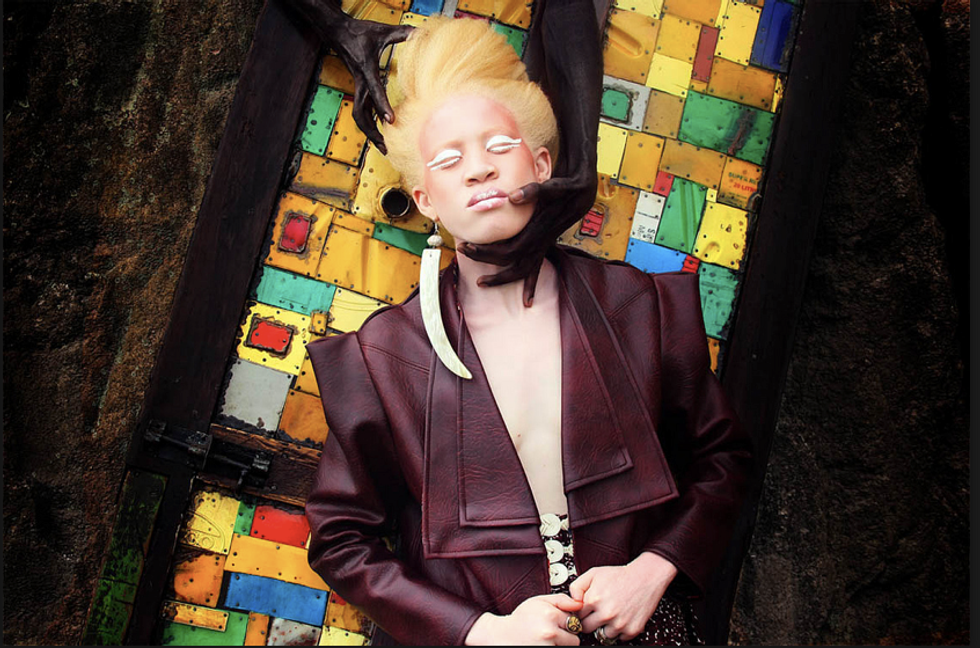 Okayafrica spent An African Minute with a self-taught photographer on the rise, Martin Kharumwa. Check out some of  this Uganda native's compelling images which range from fashion editorials, action shots,  portraits, landscapes to conceptual imagery and whimsical impressions.

1.You seem to have such an eclectic body of work. Can you describe your exact aesthetic, if you have one?

The author Elizabeth Gilbert shared at a TED talk about Ruth Stone's inspiration for her poetry, and how the source of her poems would be this strange "force" that would impose itself on her in the most random places and times; and she'd do her best to capture that story or poem before it left and went onwards.

A lot of times, that is pretty much how my personal work comes to me. I see an image and I want it to come to life and do whatever it takes, and it stays with me until i execute it or banish it and let it die away. Everything outside of that is an experiment on technique and style.

It changes a lot, one of the most consistent themes over time has been identity, like the image that inspired my taking photography seriously "ITCH" was about wrestling with my carnal nature of my flesh, and my spiritual aspirations. My most recent was the untitled image of a painted black pineapple, which I find is a bit of a visual candy and an indulgence on my part, but for me was an expression of the core of my identity and character in spite of [that]. Overall I enjoy visually indulging myself and challenging my technical ability — this being when I'm not following some strange visual impression that came from "the force."

3. You're originally from Uganda. How does that inspire your photography? Where else have you lived/visited and how do these places inform what you do?

I'm one of those "sent home" kids. Every diaspora kid hears it once in a while as the ultimate threat, its an African parent's version of the "boogey man." It happened, I acted up, so I got sent back to Ugandan boarding school from the UK. Looking back now I'm grateful for it, the culture shock was humbling but also rewarding.

Writing this just inspired an editorial idea: capturing the boarding school experience. If you sit three or four of my friends down for long enough, we'd all eventually trail into a series of mirror image tales of triple decker bunk beds, night prep, maize flour goulash, military drills, whoopings, risking expulsion by escaping from school to drink warm beer and shake a leg, awkward prom experiences in the middle of the afternoon during a heat wave, comical institutionalized bullying, miming to Boyz II Men at talent shows, security detail at Model UN and so on.

I was fortunate to have spent time in the UK and develop an appreciation and respect for my craft, as well as be challenged by working with and assisting great photographers. I'm going to find out how i can capture this sometime soon for somebody!

4.What type of equipment do you shoot with?

For commerical work I shoot with a Canon 5D Mark II, personal assignments and experiments I use a Canon 450D and a Nikon F2 film camera.

5.Can you describe your process to us? How do you go about finding the subjects that you capture?

I'm more of an image maker than an image taker, and occasionally get the luxury of having a team to work with. Whenever it's afforded to me, I enjoy collaborating with talented people. Amito Queen is an amazing Ugandan model, she makes my work look good. Gloria Wavamunno, fashion designer/art director, for our kindred curiosity that challenges my technical ability. With them on set, I tend to just go with the flow of things and we bring all our ideas into our work.

The most consistent process I've noticed though, (when not haunted by "the force") is being bored out of my mind and alone. If anything it inspires an exploration, and once that kicks in its just a question of who can make themselves available to me to shoot.

6. You are involved with the Converse Africa project — really dope tumblr page you have there. Can you describe to us what the project is about and your involvement with it?

A lot of African photographers are talking about rebranding Africa, capturing the other side of the story, as opposed to the doom and gloom that the rest of the world sees. I chose to use a global brand to do the same. Converse's identity is universal; it’s expressive, young creative, adventurous, rebellious ... I can go on for a minute about what drew me to the brand but I guess I'm a fan first, and secondly I feel that it's image resonates with a lot of what we are about.

So I started blogging my adventures as I travel and meet with people all over and hopefully I'll get to gloat a little about this continent and what its people have to say about it. I haven't yet partnered with Converse on the project, though we have talked about the blog and they love it.

7. You mentioned to us that you are a self-taught photographer, what or who inspired you to pick up the camera and what makes you continue to pursue this art form? Why do you think it is important that you do the work that you do?

I worked at an IT company in London and the art director Robin Warburton looked over my desk and noticed the photographs I'd taken, as well as the "bored and work" series of sketches and encouraged me to develop my talent. I didn't really expect that it would eventually lead to me walking away from my lovely, secure, darling pay cheque, car and career but it did.

I have my "send me back to Egypt" moments but I'm far too deep into it now. I also have days where I give up on photography, especially living here, where most of the commercial demand is for documentary photography, capturing images for NGO programs, or event and wedding photography. But I seem to always come back to it. I've been fortunate to have some creative assignments come in the door every now and then that inspire me and I get to contribute to.

The challenge for me is to also be conscious of where we are culturally and economically, and consider my own role in promoting photography as an art in Uganda, I'd like to some day see local collectors grow from here and commissions, campaigns and creative collaborations grow from within the continent's commercial companies and government organisations.

On a side note, I really dislike Coca Cola's campaign "1 billion reasons to believe in Africa," they're sweet for trying and I only assume that it's in that same spirit and sentiment, but it's generic and I don't think it's supposed to be talking to us, but I guess they never where.

To see more of Martin's work be sure to check out his tumblr page as well as his flickr.