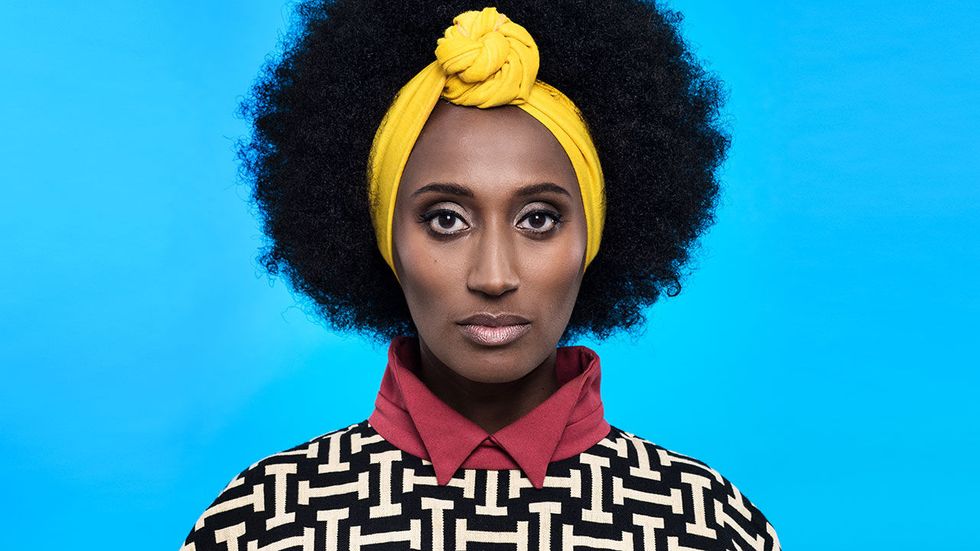 We talk to the Eritrean-British writer and fashionista on black classical music and what it's like putting on a genuine pan-African festival.

Okayafrica caught up with the senior lead programmer for the festival this year, Hannah Azieb Pool, in London.

Sabo Kpade for Okayafrica: Can you give us an overview of the Africa Utopia Festival?

Hannah Azieb Pool: African Utopia is a cross arts festival, so we use film, dance, music, literature, all the art forms to focus, highlight and celebrate contemporary art and ideas from across Africa and the diaspora that are changing the world. It's a 5-day festival this year at the Southbank Centre, which is right on the banks of the Thames in London. We start with the Cape Town Opera and Chorus who are doing the Mandela Trilogy and throughout the five days we have, like I said, film, dance, classical music, contemporary music.

Half of our programming is free and then within that we also have the talks and debates program, which is on Saturday and Sunday of the festival where we interrogate some of the kind of ideas and thinking coming out of the continent and diaspora even further. On Saturday and Sunday you can come to talk and debates looking at everything from African feminism through to youth culture through to diaspora activism and wrapped around that is the rest of the program.

How did the Africa Utopia festival come about?

This is the fourth festival. The first was in 2012 around the time of the Olympics, after a series of conversation between Jude Kelly, the artistic director of Southbank Center and the great Senegalese singer as activist Babaa Maal.

Tell us a bit about you curatorial process. How you decide on what gets programmed?

The festival is conceived to begin with a series of "think-ins." The think-ins are open brainstorms. We invite artists, performers and activists, to people who've been in the audience, to people who have been on stage here at the Southbank Center, to come and really discuss what should be in a festival.

It’s a huge continent of 54 countries and roughly 2000 languages. Properly representing all these countries and will require more than 5 day festival. How do you plan to address that?

We are trying to be a Pan-African festival. We have not gotten all 54 countries but it's very much our aim. One of the key elements of the festival—and I think that marks us out from a lot of other festivals that are trying so hard to be Pan-African—is that we're not a West African festival or even a South African Festival. Its very much north, south, east, west and central Africa—it's the diaspora within that. One of the things that I am working towards certainly is having a festival where all 54 countries are reflected. What we are doing is keeping a track of which countries are reflected and which haven't been, and that informs our programming going forward in the next years.

I'm more about action than intention and I think the action of having this festival is very much a starting point for conversation. A lot of festivals that claim to be "African" are in fact Nigerian or Ghanaian maybe. I once took someone to task for this and the person was like "we’re diverse. We have Ghana!" And I was like "Yeah, I mean really? That's all you've got?"

Is it possible that such a mix of tribes and nationalities is only found in the big European cities like London?

Classical music features heavily in the program. Why is that?

Classical music has been a key part Africa Utopia from the beginning. To me that really speaks to the notion of challenging some of the misconceptions of what constitutes African art. We’ve had the Kinshasa Symphony Orchestra. We’ve got this year, again, Chineke! which is Europe’s first all black professional orchestra.

Tell us a little more about Chineke!...

Chineke! is the second time. It was launched last year at Africa Utopia, here at the Southbank Centre in the Royal Festival Hall in our massive 3,000 seater auditorium. It was sold out. They had a huge standing ovation. They were phenomenal. Chi-chi who is the founder of Chineke! talks about how she was so inspired, moved and fired up by seeing the Kinshasa Symphony Orchestra here at Africa Utopia. That was one of the galvanizing forces for her setting up Chineke!.

How about Expensive Sh*t, the play by Adura Onashile?

Expensive Shit, I'm so excited to have. We actually did a scratch performance which is like a reading of the script as part of the Women of the World Festival in March. Now the play is coming back to us in its full form straight from the end of the Edinburgh Festival. Expensive Sh*t is phenomenal. It's cleaning up and winning lots of awards, rightly so.

And the African Squad?

Fashion has been a huge part of the festival from the beginning and this year we've been able to go even further. We've got a full day of fashion programming. Within that we've got the Africa Squad Catwalk. The creative director of the Africa Squad is Agnes Cazin of Haiti73. She's been working alongside our fashion curator Sabrina Henry putting together what is going to be an epic show.

You curated an exhibition at Brighton Museum and Art Gallery as well as publishing a book, Africa Fashion Cities, to accompany it. Added to that are your articles for the Guardian, a hard look at the perceptions of “Africa” fashion which to me evokes the spirit of Binyavanga Wainaina’s How Not To Write About Africa, a satirical masterpiece.

It's earned. For these reasons I mentioned I expected you to personally oversee the fashion exhibition.

I wish that were the case but the thing this year is that the whole festival is under my umbrella so that is fashion, literature, contemporary dance, classical music. Fashion is a key amazing part of that. I'm lead programmer for the whole festival this year.

Nice. What is People’s Catwalk?

Lastly, what to you will be a successful Africa Utopia festival?

To me, a successful festival is one that takes over the whole side, so the whole Southbank Center becomes fizzing and popping and alive with all things beautifully and fabulously African. Within that you have a richness and depth of conversation, and thinking and analysis, coming both from the speakers that we've been able to bring from across the continent and the diaspora, and the audience interacting with each other and changing some people's perceptions of what constitutes contemporary Africa.