We sit down with British-Nigerian songwriter Moelogo to talk about his new EP 'Ìréti' and his South London influences.

Mohammed Animashaun is bringing a new feel to R&B and afrobeats.

Born in Lagos, the British-Nigerian songwriter, better known by his stage name Moelogo, moved to South London in 2001 and found a love for singing through his school music class.

Not only does Moelogo have a distinctive vocal ability that sets him apart from many acts coming out from both Nigeria and the UK, he’s also got a clear technical understanding of several genres as a whole—which is evident in the jazz, R&B, hip-hop and afrobeats-infused sound he's molded for himself.

Sitting at a living room of an apartment in Wembley, Moelogo tells me he doesn't believe in binding himself to one genre and doesn’t want to be represented as a one-dimensional artist. It's this diverse sound that's gotten him to collaborate with some noteworthy UK artists like Giggs and Mostack, as well as perform across Africa, Europe and the US.

Moelogo first broke out in 2013 with “Pangolo,” a synth-heavy track made for the dance floor. He recently came out with Ìréti, a 5-song EP created with producer P2J. "Ìréti" translates to “Hope” in his native Yoruyba language Yoruba.

His buzz is rising as the the likes of Davido and Sarkodie have remixed his Ìréti's standout “Penkele."

We got a chance to sit down with Moelogo to talk in-depth about growing up in South London and the new EP.

South London has a very rich musical history. Has your environment had a major influence on your sound?

I feel like South London has impacted a lot of my music. I feel like my experience is relatable to other people as well, not just those from South London. They can be from a different country, but they can actually picture the same kind of situations I have experienced.

So you worked really closely with P2J for your most recent EP Ìréti. How did you guys meet and what’s your working relationship like?

We met through some other producers, SOS, Mikey and Mo. It was just good vibes and we come from the same area as well, so things happened naturally.

We clicked and I said, "you know what? let's do a project together." It was meant to be just one song. But then we made the first song from the EP ("Plenty Plenty") and it was just amazing vibes from there, so we ended up making a full body of work. We didn't really know how people were going to take to it. But people just loved the outcome. 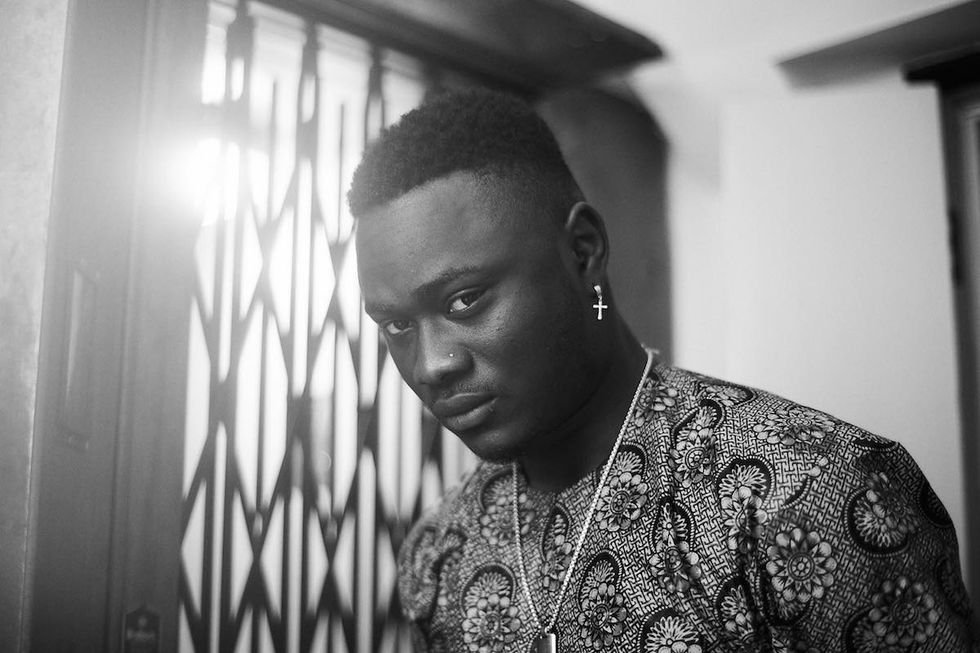 Moelogo. Photo courtesy of the artist.

I don't believe in that. I just feel like if both sides know about the music and have some kind of mutual ground of understanding... I can work with any producer as long as they are passionate about the music. I'm not really picky but I need the person to be musical and spiritual. Energy is very important. Once the energy is right, anything can happen. Music will flow. You start thinking of things you were not thinking of before and you start bouncing off each other’s energy and ideas.

Do you feel like you have a different experience in the industry being an afrobeats artist that grew up in London compared to an artist that maybe grew up Nigeria?

I think it's still the same thing because music is music. Everyone feels the same thing when they listen to music, but maybe their particular situation is different. Obviously what others go through in Nigeria, or a different country, is different from what I am going through here.

So we do have different stories to tell and sometimes maybe it’s the same thing, but the way we tell it is different. I never compare myself to anyone. With music, with my life, with what I do. I just focus on what I do. Find your own lane, and make sure no one can do what you can do.

Davido and Sarkodie remixed “Penkele” recently, how did that come about and have you guys been able to link up since then?

Sarkodie was the first one to actually reach out because he'd spoken in London with DJ Abrantee from Capital XTRA. Abrantee  gave me a call being like, "guess who I'm with?" I spoke to Sarkodie and he said he wanted to jump on "Penkele." So I sent him the track and he did it. The next day my producer was in Atlanta working with Davido on his album, so he said "you know I got Davido, give me a call." That’s how everything came about. It was very organic.

So, obviously afrobeats music is becoming really popular worldwide with some major artists—the likes of Drake, Rihanna—using the sound. How do you feel about this transition in its popularity?

I think it has always been there, man. It just took the right person to make it what it is. People have been using the sound from early on, from before I was even born.

It just took obviously the likes of Drake and other artists to actually make it shown to non-Africans. So, it's always been there, and it will only get bigger and bigger. We just need to keep pushing it and pushing our culture, because they want to know about our culture.

You can play Wizkid's songs to someone who's white or Albanian or something and they will move to it. They may not understand what you're saying but it's the feeling the music brings.

What can we expect from you in the next year?

I have got a new song coming out real soon, before the end of the year. Next year I am ready man. I don't want to say too much, but I am prepared definitely. 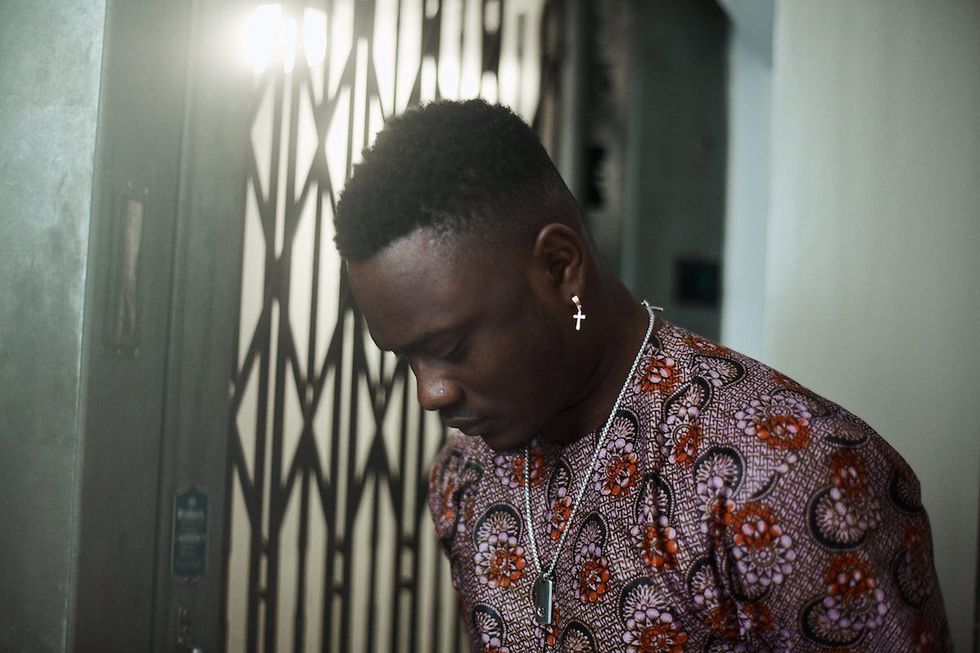 Moelogo. Photo courtesy of the artist.

Celebrating African Women Laying the Groundwork for the Future

It would not be hyperbole to consider the individuals we're honoring for OkayAfrica's 100 Women 2020 list as architects of the future.

This is to say that these women are building infrastructure, both literally and metaphorically, for future generations in Africa and in the Diaspora. And they are doing so intentionally, reaching back, laterally, and forward to bridge gaps and make sure the steps they built—and not without hard work, mines of microaggressions, and challenges—are sturdy enough for the next ascent.

In short, the women on this year's list are laying the groundwork for other women to follow. It's what late author and American novelist Toni Morrison would call your "real job."

"I tell my students, 'When you get these jobs that you have been so brilliantly trained for, just remember that your real job is that if you are free, you need to free somebody else. If you have some power, then your job is to empower somebody else."

And that's what inspired us in the curation of this year's list. Our honorees use various mediums to get the job done—DJ's, fashion designers, historians, anthropologists, and even venture capitalists—but each with the mission to clear the road ahead for generations to come. Incredible African women like Eden Ghebreselassie, a marketing lead at ESPN who created a non-profit to fight energy poverty in Eritrea; or Baratang Miya, who is quite literally building technology clubs for disadvantaged youth in South Africa.

There are the builds that aren't physically tangible—movements that inspire women to show up confidently in their skin, like Enam Asiama's quest to normalize plus-sized bodies and Frédérique (Freddie) Harrel's push for Black and African women to embrace the kink and curl of their hair.

And then there are those who use their words to build power, to take control of the narrative, and to usher in true inclusion and equity. Journalists, (sisters Nikki and Lola Ogunnaike), a novelist (Oyinkan Braithwaite), a media maven (Yolisa Phahle), and a number of historians (Nana Oforiatta Ayim, Leïla Sy) to name a few.

In a time of uncertainty in the world, there's assuredness in the mission to bring up our people. We know this moment of global challenge won't last. It is why we are moving forward to share this labor of love with you, our trusted and loyal audience. We hope that this list serves as a beacon for you during this moment—insurance that future generations will be alright. And we have our honorees to thank for securing that future.

The annual OkayAfrica 100 Women List is our effort to acknowledge and uplift African women, not only as a resource that has and will continue to enrich the world we live in, but as a group that deserves to be recognized, reinforced and treasured on a global scale. In the spirit of building infrastructure, this year's list will go beyond the month of March (Women's History Month in America) and close in September during Women's Month in South Africa.

We comb through the Nigerian star's hit-filled discography to select 20 essential songs from the African Giant.

Since bursting onto the scene in 2012 with his chart-topping single, "Like to Party," and the subsequent release of his debut album, L.I.F.E - Leaving an Impact for eternity, Burna Boy has continued to prove time and again that he is a force to be reckoned with.

The African Giant has, over the years, built a remarkable musical identity around the ardent blend of dancehall, hip-hop, reggae, R&B, and afropop to create a game-changing genre he calls afro-fusion. The result has been top tier singles, phenomenal collaborations, and global stardom—with several accolades under his belt which include a Grammy nomination and African Giant earning a spot on many publications' best albums of 2019.

We thought to delve into his hit-filled discography to bring you The 20 Essential Burna Boy Songs.