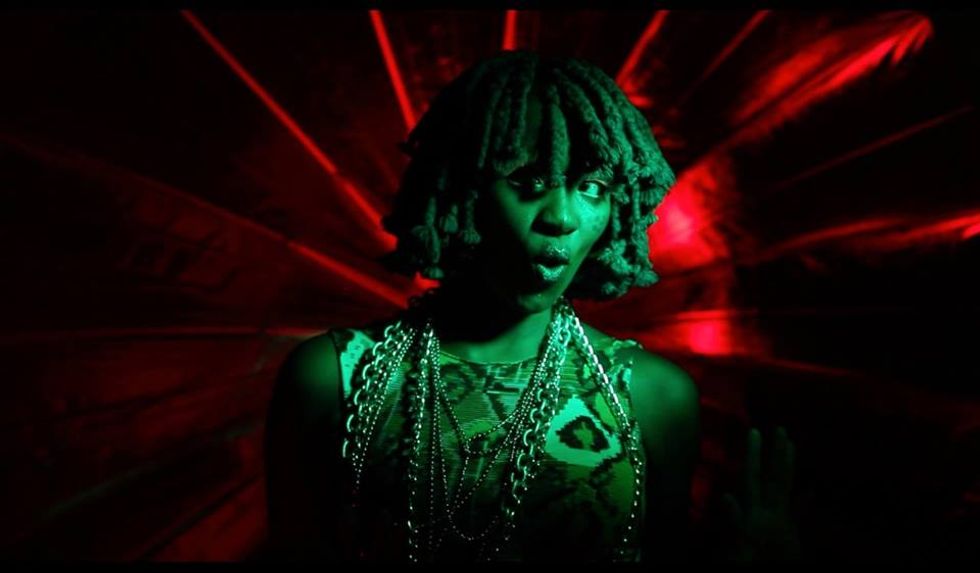 The ever creative and captivating Moonchild Sanelly had her first art installation over the weekend in Johannesburg. The installation was part of an art show at the iThuba Gallery, which included visual and audio works by a variety of artists. Sanelly’s work lay in a small, all-white room with mini "Moonchild" voodoo dolls stuck on one wall, while the music video for “Go Starring” projected on the main wall. Upon stepping into the room it was instantly clear you had arrived into the world of Moonchild. It was as fascinating and unique as you might have thought it would be, and better. Okayafrica caught up with the blue-haired creative force after the opening to get the full scoop.

Mzwandile Sibanda for Okayafrica: How does it feel to have your first art show display and how did it come about?

Moonchild Sanelly: It felt good, it felt really good. It’s new territory for me so it was super exciting and I loved it.

OKA: I love the dolls on the walls. How do the dolls relate to the music video and lyrics for “Go Starring” (that the exhibition has projected on the screen)?

Moonchild: The dolls are mini “Mooonchilds.” They are shades of the moon which is also a representation of the different people that have been failed by our justice system. The sound, tone and feel of the song “Go Starring” is light, however the subject matter is not.

OKA: What is the thinking behind this juxtaposition?

Moonchild: Tshepang (BLK JKS) came up with the idea of “Go Starring,” that is a memory from his childhood. As kids they used to sing/chant "go starring" at the main character in movies. I liked it, so I flew with it. The song is about James Bond becoming an alcoholic and failing people because he is always drunk. Just like how we are violated by our 'protectors' ie the South African Police Services (SAPS).

OKA: When can we expect your next art show?

Moonchild: I’m in talks about doing another after August so I’ll definitely keep you posted on dates. I am thinking it might be in September.

OKA: You creatively express yourself through your music, art and clothing label. Do you approach them as separate projects or are you creating synergy for the “Monnchild” brand?

Moonchild: Moonchild is the brand. Moonchild Cultwear is my clothing lable and Moonchild Sanelly is my music. Moonchildsa is my page on Facebook.

OKA: Word on the street is your album should be dropping sometime in August. Is this true? What can people expect musically from the album?

Moonchild: Its true, my album will be out the first or second week of August. My single is currently on 5fm, Yfm, Highveld Radio and my EP is on iTunes on sale. Soundcloud has the EP (Rabubi) too.

OKA: For those in Gauteng area who missed the opening, where can they catch your art show and for how long?

Moonchild: Those that missed it can catch it at iThuba Gallery (100 Juta Street), on the corner of Juta and Biccard Street, Braamfontein, Johannesburg.

OKA: Is there anything else you would to add?

Moonchild: I’ve also got my Caftan dress range in a store called Being Frank in Braamfontein on Juta Street, next to Post the restaurant.